Behind the Book: The Daughter He Wanted/Music Playlist

I'll let you in on a little secret: I can't write without music. Seriously. My brain stops sending messages to my fingers and I freeze. Sounds crazy, doesn't it? A writer should be able to write from anywhere...and I can, as long as there is music, too.

I know several writers who listen to a specific playlist from the start of a project all the way through edits. I don't do that. My writing process requires different types of music for different areas: when I'm drafting, it's light classical or jazz. No Muzak and no instrumentals of popular songs because I'll wind up singing and not writing. Once the draft is in the can and I'm on to edits, my playlist comes into play, and it will have a little bit of everything from pop and rock to country and even some oldies thrown in for good measure. While I'm editing, the songs on  my playlist will help me remember the mood of a scene or the crux of my hero's or heroine's problem...or the song will remind me of the book in general.

Here's a sampling of the playlist behind my new SuperRomance, The Daughter He Wanted: 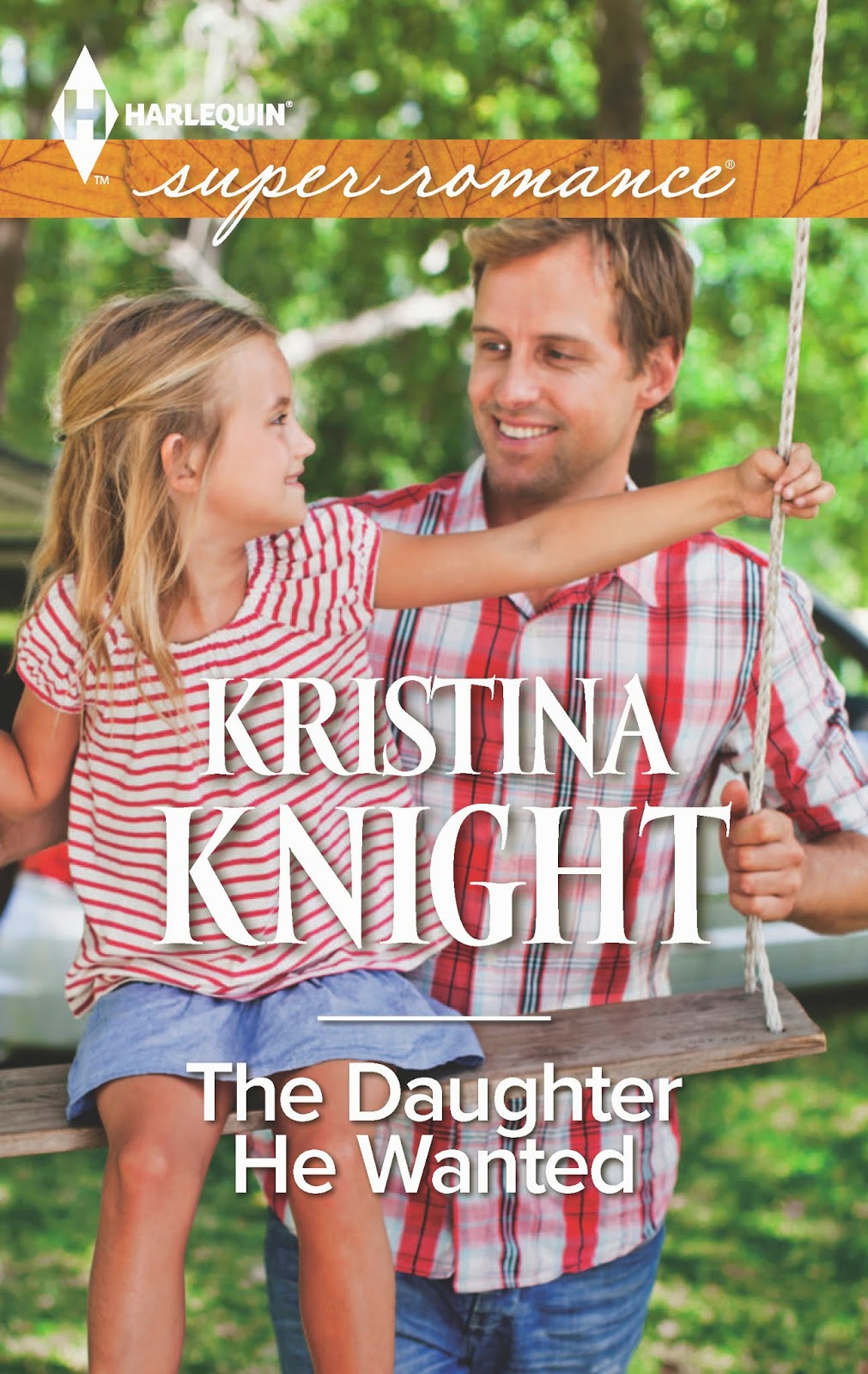 The Daughter He Wanted by Kristina Knight

Since the loss of his wife, Alex Ryan has been living a half-life. But with one phone call, Alex discovers he's the biological father of a four-year-old girl…and everything changes.

Single mom Paige Kenner preferred to have a family without the man. Now suddenly there's Alex, who desperately wants to be a father to her little girl. A gorgeous, kind and committed father. Letting a stranger into their lives is far too dangerous—especially if his presence stirs a part of Paige that she longs to forget….

“Make nice with me. Pretend you’re interested in my class. Just because we aren’t dating, it doesn’t mean I would keep Kaylie from you.”

Alex tilted his head. “That thought never entered my mind. As I said, I like talking to you.”
Paige bit her lower lip. “But, why? I’m not… You don’t…”

“You’re not my type? I don’t know you? True enough on the second. As for the first, I’ve never really had a type,” he lied. He had had a type and it was all Deanna from the first moment they met—freckles and short legs and blonde hair. Now it was all Paige, and that was unsettling. But the more he tried to push her from his mind the more firmly she seemed entrenched there.

“I was going to say it’s too soon. But I kind of feel like I’ve been saying that for a week.” The words were harsh but her voice wasn’t. There was a question there, one he couldn’t define. A curiosity.

He stepped closer and couldn’t resist touching his finger to the soft skin under her chin. He felt the touch like a lightning bolt burning along his nerve endings and when he spoke his voice was deeper than normal. “I like you, Paige Kenner, and if all I get are these chance meetings at the grocery store, that is okay with me.”

She wavered. Just for a second, but Alex was so focused on her he couldn’t miss it. For one second, she leaned slightly toward him and her mouth opened just a hair. He could feel her breath on his skin, could smell her fruity shampoo and something richer, darker beneath that. Perfume, maybe.

He leaned in, pressing his lips to hers. Just the slightest touch, and then she straightened and opened her car door.

“B-broken record or not, it is too soon.” She straightened her perfectly straight jacket and sat behind the wheel. “I won’t change my mind, you know. Not because you just kissed me under the parking lot light or because we buy the same brand of mac and cheese or because you asked about my work.”

Alex stepped back and flexed his hands against the cart handle as if that might ground him from the chemistry he was feeling. “I know.”

“Us going on a date is too much pressure. It’s too soon.”

“Okay.” He agreed because “too soon” was so much better than the never he got on Sunday.

Author Bio:
Once upon a time, Kristina Knight spent her days running from car crash to fire to meetings with local police--no, she wasn't a troublemaker, she was a journalist. Her career took her all over the United States, writing about everything from a serial killer's capture to the National Finals Rodeo. Along the way she found her very own Knight in Shining Cowboy Boots and an abiding love for romance novels. And just like the characters from her favorite books, she's living her own happily ever after.