When I was nineteen, I met this gorgeous green-eyed boy in a karaoke bar. A song later, I realized he was a soldier, and I nearly backed away. After all, as the daughter of two Lieutenant Colonels in the Army, I knew that the military lifestyle wasn’t anything I wanted for myself, or for my future kids to grow up in. Man…that boy was everything I’d dreamed love-at-first-sight to be. But was he worth the risk? Military life meant long TDY’s, moving every few years, possible deployments, and a lot of time alone. Yet all of that faded away with the way he looked at me when he said my name. Well, fifteen years later, that green-eyed boy is a gorgeous man, and our oldest son has those same green eyes.

Sometimes, you take a chance, and it’s the biggest kind of payoff. 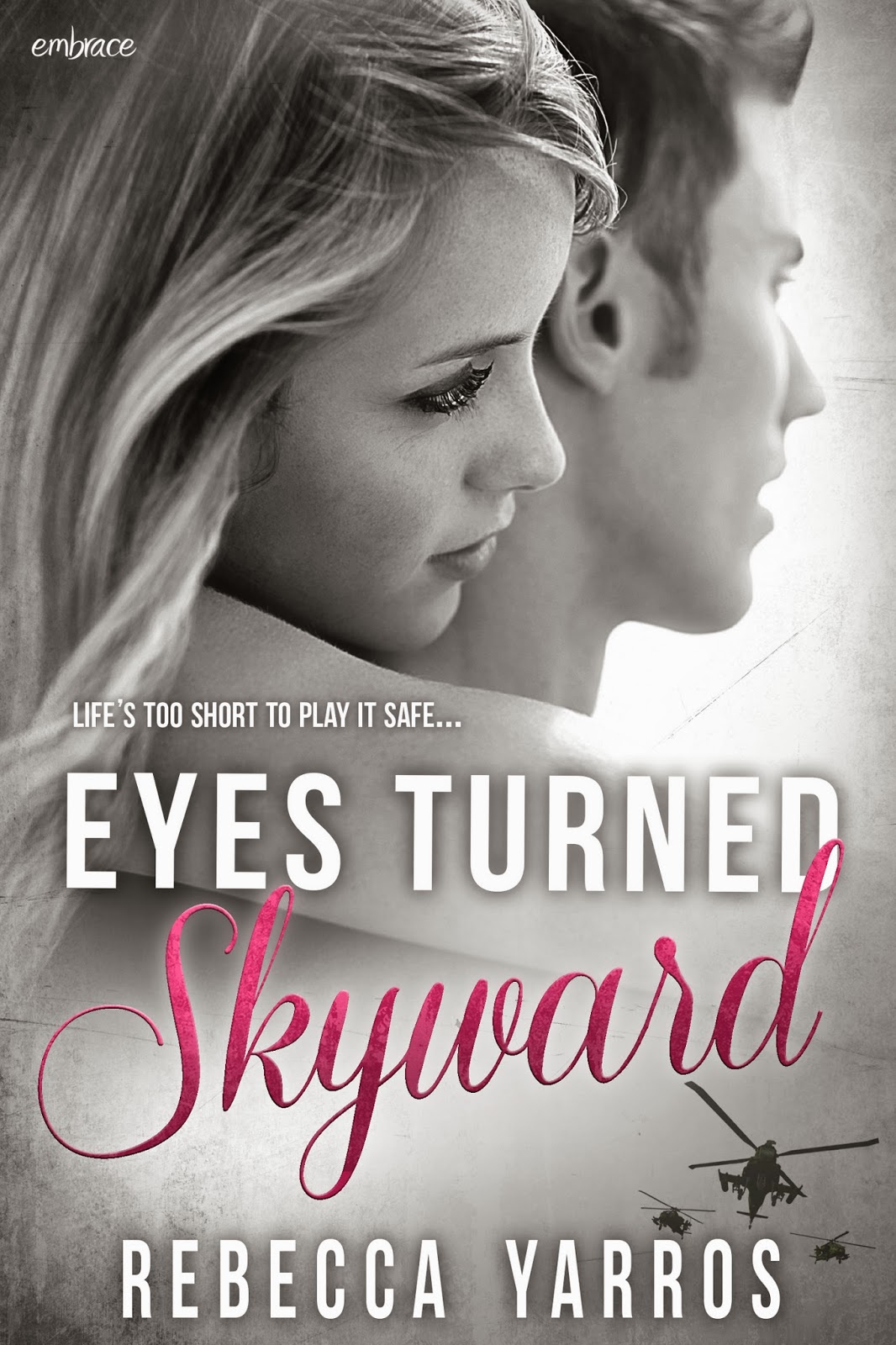 My latest novel, Eyes Turned Skyward, is all about risk. Twenty year-old Paisley has the same heart condition that killed her older sister, and yet she takes constant risks to feel alive. When she almost drowns completing her bucket list, Jagger Bateman pulls her from the ocean, and breathes more than life into her — he sets her soul on fire. But Jagger is in flight school, and Paisley isn’t just the daughter of the commanding general, she’s also the girlfriend of his biggest rival. Suddenly the risks she’s taking aren’t in spite of her heart, they’re for her heart.

If we’re taking risks, shouldn’t love be the biggest one? Jagger argues that love is the most worthwhile risk to take.

“What’s your favorite part of being in a relationship?”

“That’s an odd question.” I almost jerked, but his hands kept me steady.

I sighed. “Right. Quid pro quo. Well, I guess I love the ease. I know what his reaction will be to most things, so everything is just…comfortable. Effortless. He knows my worst qualities and doesn’t run screaming, and he knows my past because he was there for it.” He knows I could drop dead at any moment. “What about you?”

He tensed. “I don’t know. I’ve never really had a functional relationship.”

“Ever. I’ve seen it though, with my friends.” He took a deep breath, raising and lowering my head slightly. “I think I admire the connection between them. They have this…pull, an utter drive to be close to each other, like even a breath separating them is too much.”

An ache resonated from my heart that had nothing to do with my condition. “That’s what you want.”

Four heartbeats passed. “Yes, eventually. I’ve seen love burn someone to the ground, and I’ve seen it make sense of the ridiculous. I won’t settle for less than that kind of fire.”

That was the most irrational thing I’d ever heard, and something in my soul seemed to flicker awake and take notice. “Steady doesn’t do it for you? You’d rather chance destruction?”

“If it’s between being numb the rest of my life, or exquisitely burning for even a moment, I’ll take the burn. The best things in life are worth the burn, the risk.”

I swallowed the lump in my throat like he hadn’t just altered my world.
***
Risk is something we all have to take to really live. Stepping out of our comfort zone is where the magic happens, where we stretch our wings and our limits. Fifteen years ago, I risked my heart and my future on that green-eyed boy, and a name-change, four deployments, and six kids later? My greatest risk has become my foundation, my safe harbor, my net at the bottom of the trapeze we dangle from. And besides, you know what they say, right? The greater the risk, the greater the reward.

Here’s to the greats.

Giveaway:
Want to win a $5 amazon gift card? Just comment below and tell me what your greatest risk has been!

Life's too short to play it safe...

Since her sister's death, twenty-year-old Paisley Donovan, who shares her sister’s heart condition, is treated like delicate glass by her parents. But nothing will stop her from completing her Bucket List—even if it kills her. And it almost does, until Jagger Bateman pulls her from the ocean and breathes more than air into her lungs—he sets her soul on fire.
Jagger is enrolled in the country's toughest flight school. He's wickedly hot, reckless, and perfect for a girl looking to live life to the fullest. Except that Paisley is the commanding general's daughter, and her boyfriend is Jagger's biggest rival. Now Paisley must decide just how much to risk for a guy who makes her heart pound a little too hard.
They're flying through dangerous territory—and one wrong move could make them crash and burn...

Giveaway ends 11:59pm EST Dec. 15th. Please supply your email in the post. You may use spaces or full text for security. (ex. jsmith at gmail dot com) If you do not wish to supply your email, or have trouble posting, please email maureen@JustContemporaryRomance.com with a subject title of JCR GIVEAWAY to be entered in the current giveaway.
Posted by Maureen A. Miller at 12:30 AM