I’m so excited to be here at Just Contemporary Romance today, especially since I’m here to talk about my favorite book tropes. My latest release, NO PROMISES REQUIRED, is book 4 in the Love Required series, and it features a couple of popular tropes in romance. Tropes are familiar story setups or constructs that readers enjoy. For example, the virgin. Sure, some people don’t like to read about an inexperienced heroine (or hero!) but I think it’s fun to take a standard idea and turn it on its head. My heroine, Jill, may not have a ton of experience yet but she wants as much as she can get as fast as possible. She doesn’t shy away from anything! She’s completely fearless, and I find that really refreshing.

Another trope in NO PROMISES REQUIRED is that of best friend’s older brother. Jill falls for her best friend Vicky’s older brother Bryan, which has a bit of a taboo inherent in it because he’s a player and will always think of her as innocent. And of course, if something is a bit forbidden, that it makes it all the more spicy and desirable, right? With as many misgivings as both Jill and Bryan have, neither one of them can turn away from the other, and boy, are the results combustible!

Now it’s your turn. What are your favorite tropes in books (for example, secret baby, office romance, marriage of convenience)? Which are your least favorite? Why?

Thanks so much for spending some time with me today! :)
Visit Cari Quinn at www.cariquinn.com. 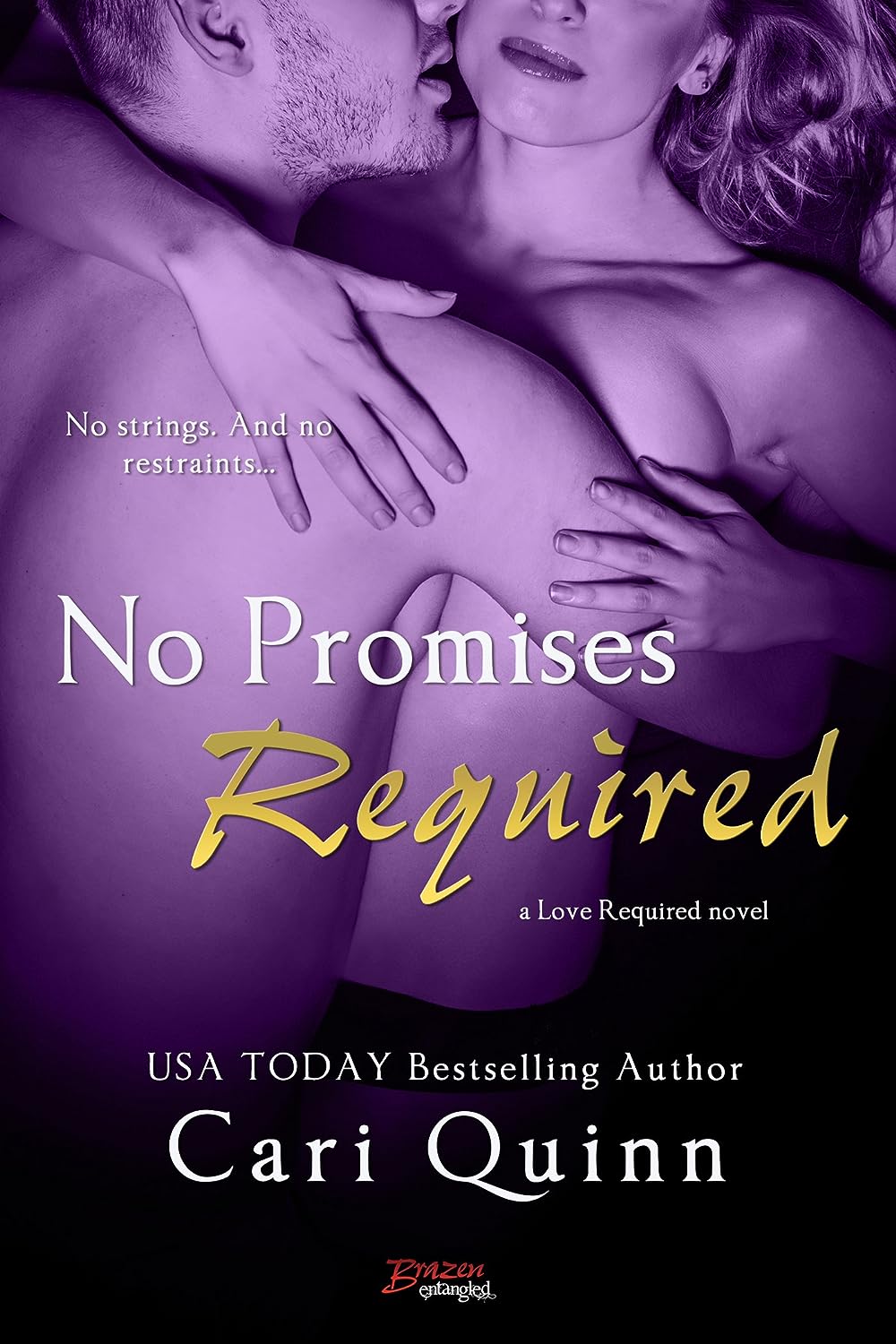 No strings. And no restraints…

Professional football player Bryan Townsend is sidelined for the next two weeks while he recovers from a knee injury. The upside? He'll get to attend his sister's wedding. The downside? He's not sure he'll have a spot on his team when he returns. So when he's confronted by a sexy blast from his past the night of the bachelor party, he sees an opportunity to seduce the very stunning maid of honor.

But Bryan had no clue Jill St. John was still a virgin. Or that she was merely looking to expand her sexual repertoire without having to trust anyone with her heart. But with every encounter, Jill can't help but fall for the man Bryan's become. The clock is running down. If he's to win it all, Bryan must make the biggest play of his career—choosing between his team…or the woman he's always wanted.

Excerpt:
Chapter One
Jill St. John’s entire life had come down to this moment—to strip or not to strip.

Jill lifted an eyebrow. Dancing in front of Cory and his other guy friends would be embarrassing enough, but half of the other people in the club were complete strangers.
Not that a bunch of strangers would stop Vic. Vic and her friends were providing the entertainment for her husband- to-be’s party, unbeknownst to him. At first, Vic had told Jill
to sit down with the guys and enjoy the show. Apparently, the days of Vic being overprotective weren’t quite over. But Jill had finally convinced Vic to let her join in.

She’d pushed to join in the pseudo-stripping routine for one very good reason. Namely, Vic’s sexy older brother Bryan was scheduled to attend.

Scheduled, yes. A sure bet, no.

It seemed like she’d been angling to get closer to Bryan forever. Vic thought Jill barely knew her big brother, but she was wrong. They had a past Vic had never been privy to, for good reason. They’d talked a lot as teenagers—and one night, they’d even gone past conversation.

Haven’s resident football star was back in town for two weeks, and if she had her way, they’d be two very dirty weeks, thank you very much. Tonight would start them off on the right note.

But with every passing minute, it seemed less likely that Bryan would appear in time for the main event. If he even came at all.

Well, she wasn’t about to make a fool of herself with no payoff. Her stage fright was kicking in, and without the chance to make Bryan drool, she was out.

But how to break the news to Vic?

Hey, I know I asked you to let me join in, but I just remembered that I break out in hives whenever I have to wear anything made out of feathers, latex, or pleather. True fact.

She tried the soft approach. “Are you sure you need me?”

“Seriously? Jill, you begged me to let you do this.”

“I guess I’ve just got a little stage fright.”

Vicky turned toward Jill, her big brown eyes silently imploring. “You can’t back out now. I can’t go out there with just Mel and Nellie and Lex. We modified the routine for five dancers.”

“A routine I butchered during practice.” Jill tugged her lip gloss out of her purse and leaned closer to the mirror for a quick touch-up. “Besides, I’m not dressed to strip,” she added, glancing down at her little black dress and chunky heels. Thank God, she finished in her head.

As much as she wanted to shed her boring image and begin having the wild adventures she’d always dreamed about—ideally with Bryan—before she started Vet-Tech school in the fall, she wasn’t sure this was the way to start. She wasn’t harboring any illusions that Bryan would want to settle down with her, but that was okay.

She’d dealt with enough of her fame-junkie father’s in- and-out appearances in her life than to want a relationship with a man who lived in the spotlight. She wasn’t worried whether she could compete with all of his fans. She knew she couldn’t. But that didn’t mean she couldn’t grab him for a night. Or two. Or three.

Assuming she managed to put the moves on him before his defenses came up.


Jill didn’t have any moves, dancing or otherwise. But she had other assets to lure Bryan with. Even though Vic had so deviously devised the dance routine so that Jill would come on stage last, at the back of the group, she’d planned to head straight for Bryan. With luck, she’d have been on him before he could look at anyone else. Touching him. Tempting him. And hopefully seducing him…

Author Bio:
USA Today bestselling author Cari Quinn wrote her first story—a bible parable—in 2nd grade, much to the delight of the nuns at her Catholic school. Once she saw the warm reception that first tale garnered, she was hooked. Now she gets to pen sexy romances for a living and routinely counts her lucky stars. When she’s not scribbling furiously, she can usually be found watching men’s college basketball, playing her music way too loud or causing trouble. Sometimes simultaneously.