Animals are cute, but are they characters?


When I originally wrote Running the Red Light (Texas Nights #2), I had no idea the story’s antagonist, Ashton Davenport, would end up earning a book of her own. Because neither Ashton nor Napoleon, her shih-poo mix, were particularly nice characters.

Still, Ashton grew on me, and I knew I wouldn’t be satisfied unless I put her under the microscope. So when it came time for her own happy-ever-after, I knew I had to reform her and her dog from their trouble-making ways. And honestly, it was sometimes easier to reform Ashton than it was her wily little dog! Because Napoleon’s been known to growl, run across a restaurant table spilling beer in his wake, and even choke on a pair of ben-wa balls.

I mean, how does a writer redeem a little hellion like that?

Well, I gave Napoleon a human nemesis, Mac McLaughlin. Who—yep, you guessed it—is Ashton’s love interest. And her dog is anything but happy about the situation.

I won’t spoil Designed for Love by telling you all the ways Napoleon subtly or not-so-subtly lets Mac know he’s not good enough for Ashton. (Okay, fine, so there’s this one incident with Napoleon and Mac’s jockstrap, but that’s all I’m sharing. ;-) ) Suffice it to say, Mac knows he’ll never win over Ashton if he can’t first woo her dog. Lucky for him, he hits on a solution that even snobby Napoleon can’t resist—SPAM. Yes, Ashton’s pup has an obsession with canned meat. Mac and Napoleon actually have their own relationship arc in Designed for Love. And this tickles me to death because it casts Ashton’s dog as an actual character rather than merely a sidekick pet.

So many authors do an amazing job representing pets in their stories. Of course, Kristan Higgins comes to mind as does Susan Elizabeth Phillips (Pooh from It Had to Be You is one of my all-time faves.) My critique partner, Jamie Farrell, is also an ace at crafting quirky pets (look for the menagerie in her January novella release, Smittened!).

If you pick up Designed for Love (or one of the other Texas Nights books), I certainly hope that Napoleon (or Voltaire from Problems in Paradise) cuddle their way into your heart!
---
So share your favorite animal characters and which authors—in your opinion—do a great job in crafting them! 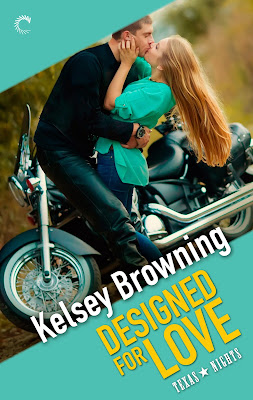 That’s how Mac McLaughlin sees her, anyway. And now that he’s enduring a temporary self-imposed exile in tiny Shelbyville, Texas, he’s seeing her way too often. Mac only wants to succeed as the contractor for the Lily Lake development in order to rebuild his reputation and return to Dallas, pronto. A sexy distraction like Ashton was not in the plans.

Ashton kissed her trust fund goodbye and left her life as a society princess to prove she could make it on her own. Developing Lily Lake is her big chance, but it’s hard to stay focused working side-by-side with bossy, rough-around-the-edges Mac. Especially when he pulls off his shirt.


When the discovery of an endangered species derails the project, Mac can’t afford to stick around for a stalled job. His and Ashton’s explosive chemistry aside, he’s outta there…unless she can convince him that they just might be able to build something together.

About the Author
Kelsey Browning writes sass kickin’ love stories and co-authors Southern cozy mysteries. She’s also a co-founder of Romance University blog, one of Writer’s Digest 101 Best Websites for Writers. Originally from a Texas town smaller than the ones she writes about, Kelsey has also lived in the Middle East and Los Angeles, proving she’s either adventurous or downright nuts. These days, she hangs out in northeast Georgia with Tech Guy, Smarty Boy, Bad Dog and Pharaoh, a (fingers crossed) future therapy dog.