Congratulations to "Lynne D." the winner in Jenny's giveaway. Thank you to all who participated!

Hi. My name is Jenny, and I’m addicted to romance novels.

It wasn’t always so. I was a late bloomer. I didn’t discover romance novels until I was in my 30s, and then my gateway drug was the regency novel. Like Jane Austen, but with sexytimes! I was hooked, and I proceeded to devour everything I could get my hands on. So when I decided to try my hand at writing a romance novel, I initially wrote a regency. (And I do have a regency trilogy releasing this spring and summer from Entangled Publishing.) But somewhere along the way, I started meeting other authors, and of course I wanted to read their books. Then one day I had a conversation with my agent. It went something like this:

Me: What should I write next?

Agent: You should write a contemporary novel. A novel with more sexytimes than your historicals. (This conversation is being paraphrased and dramatized for your entertainment. My agent does not actually talk like this, on account of the whole “she’s a professional” thing.)

Agent: You can totally do that.

And lo, my debut novel Saving the CEO was born. And, OMG, the 21st century! It turns out I love it! And not just because we have running water, and, like, women’s suffrage.

So, allow me to present to you the top five reasons to love contemporary romance.

1. Your characters can curse however the f*#! they want. Once you’re not limited to drat, dash, egad, and my heavens, I’m telling you, it’s a whole new world.

3. Jobs! Your heroine can have one! This makes it easier to make her a complex, well-rounded person. It also lets her have a diversity of friends and acquaintances that a sheltered Regency miss would not.

4. Sexytimes! So much easier when you don’t have to arrange some wild, unlikely scenario that will allow your characters to “get to know each other.” (See #2 above.)

5. Research! You don’t have to do it! I kid here. I loved doing the research for my regencies. But after having written four of them (my first book is under my bed, where is shall remain for all eternity), suddenly writing a book that didn’t require getting really friendly with the folks at interlibrary loan was a joy.

I will say, though, there is one BIG thing that Regency novels have going for them that contemporary ones don’t: Balls. A good ball goes a LONG way in my heart.

He's making a list...and breaking every rule on it. 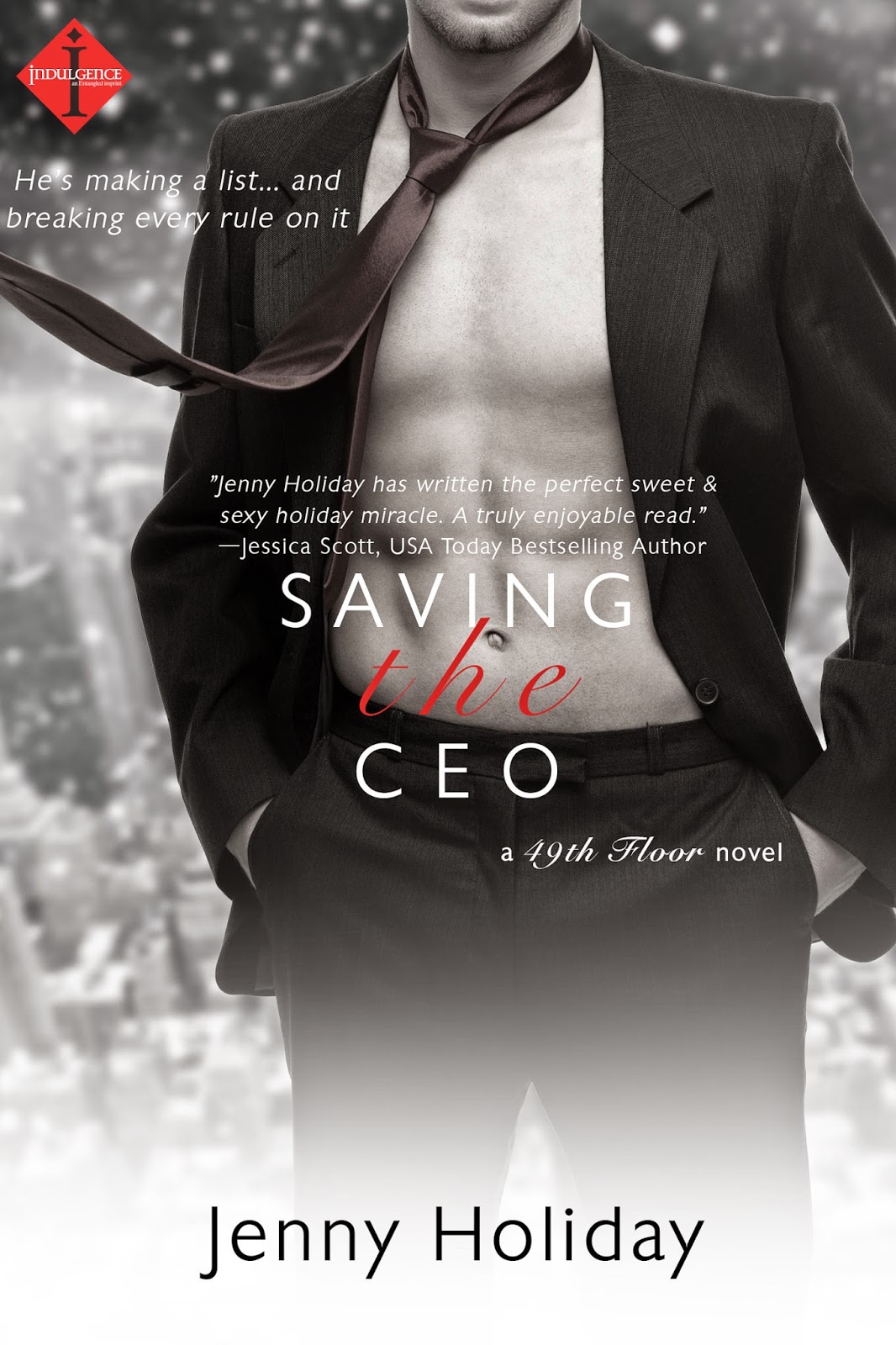 Real estate mogul Jack Winter has rules. Lots of rules. After all, a man doesn’t build an empire without a little discipline. And on page one of the rulebook? Don’t sleep with your employees. Especially when there’s a multimillion dollar real estate deal at stake...

Luckily for Jack, Cassie James isn’t really his employee. She’s a hot bartender who just happens to be the math genius he needs, and if they share a wicked chemistry? Well, that's just a sexy little perk. So they strike a deal: Cassie helps Jack with the merger. And until the deal goes through at Christmas, they can indulge every impulse they desire.

But the more rules Jack makes, the more he seems to break...

Giveaway
jenny will be giving away a digital copy of Saving the CEO to one lucky person leaving a comment or email entry.

About me
Jenny Holiday started writing in fourth grade, when her awesome hippie teacher, between sessions of Pete Seeger singing and anti-nuclear power plant letter writing, gave the kids notebooks and told them to write stories. Most of Jenny’s featured poltergeist, alien invasions, or serial killers who managed to murder everyone except her and her mom. She showed early promise as a romance writer, though, because nearly every story had a happy ending: fictional Jenny woke up to find that the story had been a dream, and that her best friend, father, and sister had not, in fact, been axe-murdered.

Giveaway ends 11:59pm EST Oct. 30th. Please supply your email in the post. You may use spaces or full text for security. (ex. jsmith at gmail dot com) If you do not wish to supply your email, or have trouble posting, please email maureen@JustContemporaryRomance.com with a subject title of JCR GIVEAWAY to be entered in the current giveaway.