When One Night Changes Everything


I’m one of those people who could have gone to university forever! I took a journalism program which began with a ‘foundation year’ in which I studied the classics from the early philosophers right to modern day literary fiction. That was the entire year! I have to say I never really understood Plato, loved Nietzsche and ate up Dante like there was no tomorrow! Then, during the following three years of my degree, I gobbled up cool electives like Greek Mythology. Who needs to work?

I did manage to tear myself away from school to a career in journalism and PR. But, now with my books, I can indulge my passion for learning and research on the topics that fascinate me. I love interviewing interesting people for books like I did a former Las Vegas stripper for The Magnate’s Manifesto coming out in December. She was utterly fascinating and inspiring. 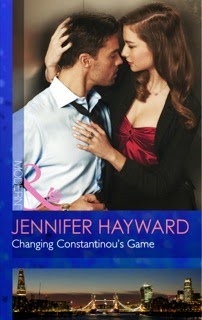 For my current book, Changing Constantinou’s Game, however, I went back to my roots. My heroine, Isabel, is a New York City broadcast reporter. During my journalism degree, I did an internship at a national sports broadcaster. What a rush it was. I loved the energy, but the competitiveness and pressure to stay on top made an impression on me. It takes a certain type of make-up to thrive in that profession.

Thus Izzie was born. A community reporter for a Manhattan television station, she’s on the verge of a career breakthrough. Having lost the fifteen pounds that have plagued her self-confidence since childhood, she’s on a roll, turning in great stories that have the network execs noticing. Then comes the shocking phone call from her boss while she’s on vacation with her girlfriends in Tuscany. An anchor job has opened up at NYC-TV and the network execs want her to compete. She should be over the moon. This is her chance to prove the brainy, less spectacular daughter of Hollywood actress, Dayla St. Peters, can shine in the spotlight just like her supermodel sister. But after spending her whole life trying to live up to her mother’s expectations, there’s no greater opportunity for Izzie  to crash and burn. She heads back to New York for the interview, diverting first to London to flush out an interview target for her boss. Simple enough? Until elevator-phobe Izzie gets stuck in an out-of-control lift -- with a man straight out of her fantasy playbook.

That man, of course, is Alexios Constantinou, who not only knocks Izzie’s brain sideways, but becomes the subject of the big story Izzie must land to earn the anchor job. Izzie might not regret her one-night-stand, but it’s making her life a big, fat mess.

Is what she’s dreamed of actually what’s going to make her happy?

I hope you enjoy this excerpt from Changing Constantinou’s Game. Thanks for having me here at Just Contemporary Romance!

One kiss couldn't hurt, could it?

Alexios Constantinou is notorious for his lethal charm, so when the exquisite Isabel Peters is—literally—dropped into his lap during a hellish elevator ride, he doesn't waste the opportunity! With tensions sky-high after their near-death experience, an insatiable desire ignites between them, and all bets are off.

But when Alex discovers that reporter Isabel's next story is him, he's furious…yet determined to use it to his advantage. He's calling the shots, but the closer Isabel gets, the closer she comes to discovering his carefully concealed secret. Now, with everything at stake, he'll need a whole new game plan….

Izzie focused on forking the small amount of food she thought she could consume into her mouth at the small candlelit table Alex had set on the terrace. The herbed pasta was delicious, but it was hard to eat when her heart was still pounding and her hands trembling so much negotiating a fork seemed like a new and highly complex activity. And why wouldn't it when she had literally jumped into the deep end and invited the most spectacularly good looking man she'd ever met to kiss her--and he had!  Not to mention the fact that the kiss had been the most incredible of her life and all she could think about was experiencing more of the bone-meltingly delicious heat that had coursed through her veins. It was like every nerve ending in her body had been switched on for the first time and she wasn't sure whether to revel in it or be completely terrified of what she was feeling.

She swallowed hard, forced down the food. The fact that she'd been right--that Alex was attracted to her--made her head feel like it was going to blow off.  Maybe Jo was right. Maybe it had been her defensive attitude that had turned men off in the past and not the fifteen extra pounds she'd been carrying. Which had always been her excuse.

She took another sip of the rich, full Cabernet that was going a long way to mellowing her out. But the wine didn't seem to be having the same effect on Alex who'd glowered at her throughout the entire meal-as if she'd committed a crime rather than simply kissed him.

She risked a quick glance at him.  He was still watching her with that same, implacable frown on his face, that penetrating blue gaze of his impossible to read. And it occurred to her she hadn't fully thought through her plan. She had the mind numbing confirmation he was attracted to her...the question now was what was she going to do about it?

Her heart pounding in her chest, she set her fork down with an abrupt movement, and the sound of metal clattering against fine china echoed in the still night air.

He gave her half-empty plate a narrowed glance. "That's all you're going to eat?"

"It was delicious, thank you. I think that's about all I can handle.'
"All right." He laid his fork down with a deliberate movement and pushed his plate away.  "Let's talk about what happened."

Gladly.  She took another sip of her wine to fortify herself and set the glass down.

"That kiss shouldn't have happened."

She was ready for that one.  "Why not?

"I'm much more experienced than you, Isabel. I'm not interested in relationships, in fact mine never last longer than a few months, and the women I date are well aware of that."

He did a double take at the belligerent note in her voice. "You're also probably still in shock from what happened today."

"I'm absolutely fine," she countered.  "In fact I feel like I have more clarity right now than I've ever had in my life."

He sat back in his chair, his gaze on her face.  "What kind of clarity?"

She twisted the stem of her wine glass on the table, watching the blood red liquid shimmer in the candlelight. "That was my worst fear today. Facing it-getting through it-" she paused, looking up at him, "--it's made me realize how much of my life I've lived in fear...how many times I've not gone after what I wanted because I was afraid I wouldn't get it or it would explode in my face."

He gave a wary nod.  "That's a good realization."

She shook her head.  "I'm not looking for a relationship, Alex." A husky laugh escaped her.  "In fact, that's the last thing I need right now."

His eyes narrowed. "Then what are you looking for?"

"I don't want to live with any more regrets."

He shook his head, a wry smile curving his lips. "You're twenty-five, Isabel. How many regrets can you have?"

She took a deep breath, meeting his gaze head-on. "I will regret it if I walk away from tonight without exploring the attraction that's between us."

A muscle jumped in his jaw.  He sat there completely silent, staring at her.  "I'm not sure you know what you're doing."

She shook her head.  "I know exactly what I'm doing."

A long moment passed, it might have been four, five seconds, she wasn't sure. All she knew was that she was holding her breath, sure at one point he was going to reject her. The warm night air pressed so heavily against her lungs she thought they would burst.  And then something shifted, morphed on the air between them. And she got her answer in the darkening of his eyes.
***
Giveaway:
Jennifer will be giving away a print copy of Changing Constantinou’s Game to one lucky person leaving a comment or email entry.

Bio
JENNIFER HAYWARD has been a fan of romance since filching her sister’s novels to escape her teenaged angst.

Her career in journalism and PR, including years of working alongside powerful, charismatic CEOs and traveling the world, has provided perfect fodder for the fast-paced, sexy stories she likes to write, always with a touch of humour. You can find out more about Jennifer and her books and sign up for her newsletter at her website. Or you can find her on twitter and facebook.

Giveaway ends 11:59pm EST Sep. 2nd. Please supply your email in the post. You may use spaces or full text for security. (ex. jsmith at gmail dot com) If you do not wish to supply your email, or have trouble posting, please email maureen@JustContemporaryRomance.com with a subject title of JCR GIVEAWAY to be entered in the current giveaway.