The Art of Seduction

Congratulations to "Ada" the winner in Regina's giveaway! Thank you to all who participated.

So when I decided to try my hand at writing a romance novel, contemporary was an obvious choice. But where to set it? Big city? Small town? Way out west?

They say write what you know, and what I know is I’m a complete and total theater geek. On stage, back stage, in the audience – I’ve done it all. There’s something so magical about the whole theater experience for me, whether I’m performing or watching. And what better place to fall in love than a fairy-tale world of make believe?

Then I did a little snooping and found there are very few – like almost no – romance novels set in the world of theater. Lots of movie stars and models, but no one treading the boards, as we say in the biz. And I remembered that old entrepreneurial saying: see a need, fill a need.

Thus, the seeds of Triple Threat were born. Holly’s a playwright fresh out of a disastrous marriage to an abusive husband. Nick’s a Hollywood action hero looking for more serious roles, and the subject of Holly’s semi-autobiographical play hits close to home for him, too. Getting these two damaged souls together for their HEA was challenging – but oh, so rewarding. Not to mention steamy as a sauna on a summer night.
Fortunately (I hope) for readers, my love of the arts doesn’t stop with theater. There’s so much more to explore – fine art, photography, dance. And Holly, the heroine in Triple Threat, has three siblings. They each get their own story as part of the Art of Seduction series.

Giveaway
What’s your favorite art form? Painting? Opera? Dance? Film? Something else? One lucky commenter will win a $10 Amazon or Barnes and Noble gift card. 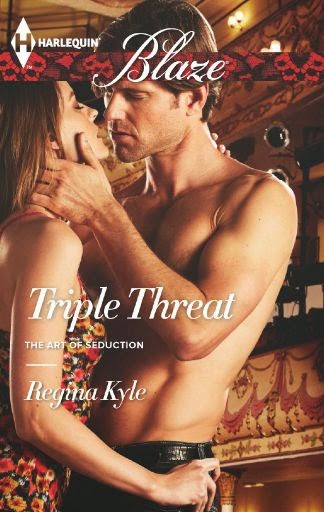 The Playwright: It’s emerging playwright Holly Nelson’s big break. Broadway. Having survived her traumatic marriage and divorce, Holly is now aiming for success, not love. And any naughty dreams about Nick Damone—the gorgeously dishy star who was her crush back in high school—must remain a fantasy.

The Star: For Nick, Broadway is a chance to go from big-screen-eye-candy to serious actor, and to explore the lust blazing between him and Holly. But life-threatening accidents will force a chain of events that could bring down the curtain on the whole production…or give Nick and Holly a chance to finish the sexy something that started fifteen years ago!

Excerpt:
“You think too much.” Devin was back, replacing Holly’s empty glass with a tumbler of foamy, white liquid. “I’m afraid to ask what’s going on in there sometimes.”

“Don’t.” Holly sipped the frothy concoction, hoping the rich, sweet taste would obliterate the lingering flavor of the scotch, and the memory of Nick’s kiss.

“Whatever it is, I’m jealous.” Devin strong-armed a tray of glasses onto the bar and grabbed a clean towel to wipe them dry. “I could swear there’s steam rising off your skin.”

“Then it must involve your Hottie McHothot movie star.”

“He is not my movie star.” Holly shook her head, regretting her decision, in a moment of girl bonding over a True Blood marathon, to tell Devin about her renewed obsession with Nick.

“What makes you say that?”

Devin smiled and waved her towel at the door. “He just walked in.”

“Not funny.” But normally cool, biker-tough Devin was beaming like an awestruck fangirl. Holly’s stomach dropped.

“No way,” she whispered.

Holly spun on her stool, and there was Nick walking toward her, nine kinds of fine in a black leather jacket, heather-gray T-shirt and his customary jeans, faded and seemingly shrink-wrapped to his thighs. In a few strides, he crossed the narrow bar and was at her side.

Those five words took her back fifteen years. She eyed Nick, wondering if he realized he’d said the same thing to her on the dock that night.

“Feel free,” she answered, trying to sound indifferent. Not an easy feat when just the sound of his voice made her whole body hum like a tuning fork. At least this time she’d managed more than “Uh, yeah.”

And then he was next to her. Sitting. Leaning. His knee brushed hers, ratcheting the hum up to a dull roar.

Devin ditched the towel and leaned against the bar, giving Nick an eyeful of her ample cleavage. “What can I get you?”

“Traitor,” Holly muttered, shooting daggers at her. Devin smiled and shrugged as if to say, “You’re not interested. That makes him fair game. Right?”

Right, Holly told herself. Not interested. Fair game. No matter what her mutinous, pulsating body said.

My Links:
www.reginakyleauthor.com
www.facebook.com/reginakyleauthor
www.goodreads.com/goodreadscomreginakyle
@regina_kyle1
Author Bio:
Regina Kyle knew she was destined to be an author when she won a writing contest at age ten with a touching tale about a squirrel and a nut pie. By day, she writes dry legal briefs, representing the state in criminal appeals. At night, she writes steamy romance with heart and humor.

A lover of all things theatrical, Regina lives on the Connecticut coast with her husband, teenaged daughter and two melodramatic cats. When she’s not writing, she’s most likely singing, reading, cooking or watching bad reality television. She’s a member of Romance Writers of America and treasurer of her local RWA chapter.

Giveaway ends 11:59pm EST Sep. 26th. Please supply your email in the post. You may use spaces or full text for security. (ex. jsmith at gmail dot com) If you do not wish to supply your email, or have trouble posting, please email maureen@JustContemporaryRomance.com with a subject title of JCR GIVEAWAY to be entered in the current giveaway.
Posted by Maureen A. Miller at 12:30 AM