I’ve looked forward to being a guest on Just Contemporary Romance in order to share our Boxed set, Ten Brides for Ten Heroes, with the readers and tell them about the wonderful deal we’re offering for a paltry 99cents.  This collection has ten, full-length novels written by New York Times, USA Today, and Amazon best-sellers who want to reach a larger audience. And… each book features a wedding to satisfy all the romantics who love to read this genre.

Ten Brides for Ten Heroes spans the gamut of the ever-popular wedding romance genre—from heartwarming laughter to thrilling adventure, from sweet to steamy. This 10-book bundle features novels by New York Times, USA Today and National bestselling authors. So get ready to toss the bouquet and say, "I do!" as ten brides risk it all to find their happy ever after. 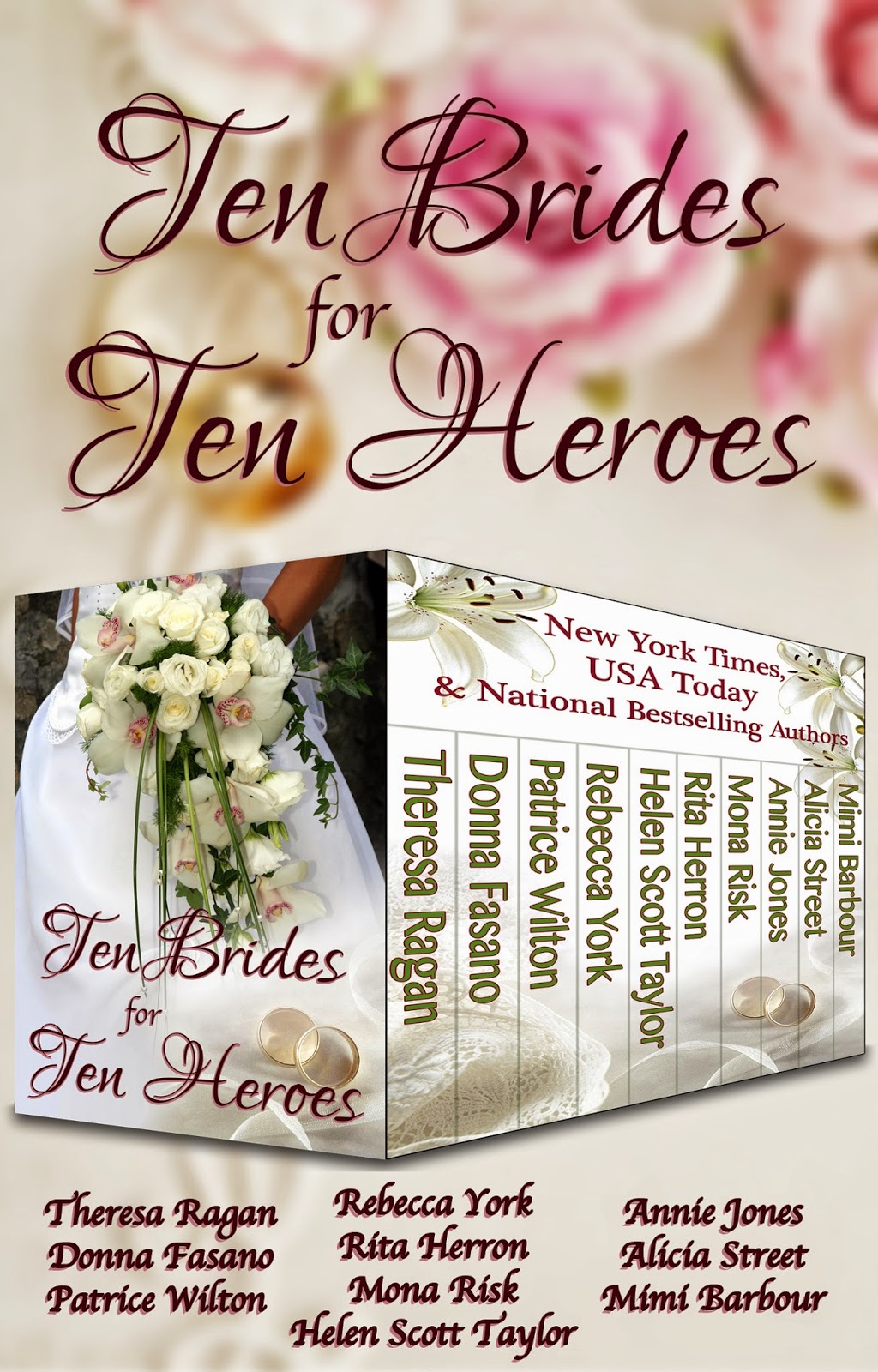 
Samantha Johnston, a reporter for the LA Beat, attends the wedding of one of America’s hottest actors in hopes of learning the identity of his mystery bride, and ends up saying, “I do.”


Savanna returns to her hometown to explain why she fled on her wedding day, but she never imagined how her escape all those years ago changed Daniel. Can she make him understand—and forgive?


Mila O’Reilley owns Wedding Fever, a bridal boutique in Serendipity Falls Mall. She sells more than dresses, she sells dreams along with the belief in happily-ever-after – a sentiment she personally doesn’t share. Can a jaded bridal consultant and a cynical news reporter uncover the true mystery of Serendipity Falls without being swept away in the madness?


From the moment Nick Cassidy signed on as one one of Camille Norland’s bodyguards, sexual sparks flew between them. Although determined to keep his emotional distance from her, Nick is forced to admit his real feelings when she’s kidnapped by a ruthless Russian mobster with matrimony in mind.  Can Nick rescue her before the wedding night?  Can they escape from Victor Zanov’s tropical island death trap?  And can they come to terms with their complicated relationship?


Major Cameron Knight throws himself into the danger of front-line, battlefield medicine to keep the demons from his past away. When he rescues an injured charity worker who's saved a tiny newborn baby, he marries her so they can take the orphan back home for surgery. With this brave woman he finally has the chance to redeem himself and find love.


A woman looking for love... A reporter looking for a story... A mad rush to find a criminal... When the truth comes out and danger strikes, will they succumb to the passion burning between them?


Claire and David faced many challenges over the years. Finally, Claire's dream of a wonderful white wedding to the man she loves is about to come true. Two weeks before the wedding, Adriana, the high-school classmate who’s tried to snatch David several times, makes an announcement that threatens to destroy the couple's happiness. Is Claire and David’s love for each other strong enough to turn the worst wedding surprise into the best?


Brides, Beehives and Barbecue! Can mother daughter mayhem be far behind? Bless her heart, it's 1967 and a determined southern bride isn't sure love is really all she needs.


Kendra returns home for her brother’s wedding determined to get her age-old crush to finally see her as more than a tomboy. But will her game of making him jealous with a hot and handsome faux-beau make him fall for her—or backfire and leave her in ashes?


After her year in Texas as an exchange student, Annie leaves pregnant and heartbroken. Nine years later she returns to introduce her eight-year-old son to his American family. And to the man who still haunts her dreams – the handsome, embittered rancher who never knew he’d fathered a son.