Saved By The Salsa

Congratulations to "Maria I.", the winner in Barbara's giveaway. Thank you to all who participated!

Thank you for inviting me to be your guest on “Just Contemporary Romance” for the next two days. What a perfect location for me to talk about my latest release. 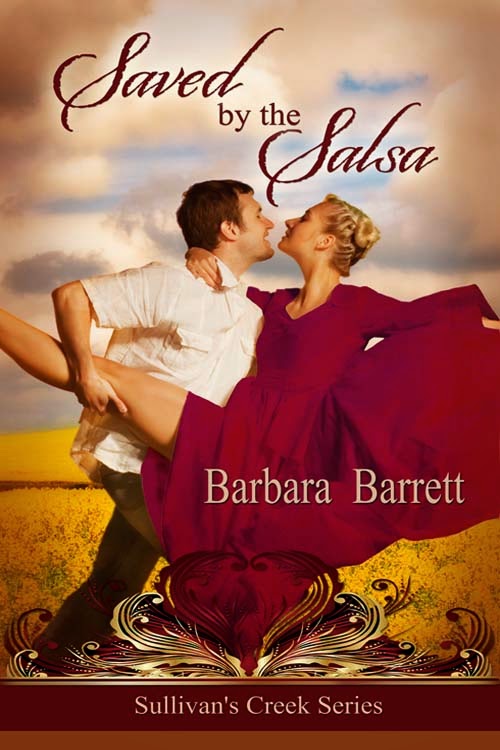 My new release, Saved by the Salsa, the first book in the Sullivan’s Creek Series, was initially titled “Blueprint for Love,” because it was about two architects with diametrically opposed work styles forced to work together on a huge residential housing project. Call it my working title, because, although it suggested the architecture tie-in, it just didn’t grab my imagination.

My two architects are charged with coming up with the design concept for a retirement community for baby boomers. Being a boomer myself, I’d thrown that part in because at the time I first started this book, determining where my husband and I would be spending our so-called “golden years” was on our to-do list. Since I knew a little bit about this generation, I decided my hero and heroine would be clueless and have to do some investigating to figure out what boomers wanted.

So the task was to figure out how to make their research not only fun and interesting but something that would progress the story.

About that time I watched “Dancing with the Stars” and noticed the heat generated by the contestant and professional partner in their dance routine. Yes, the woman’s costume was skimpy and flashy. Guess that’s the first thing anyone notices. But beyond that, the syncopated rhythm, the swaying and coming together of the two bodies plus their meaningful eye contact made me feel like a voyeur. They were dancing the Salsa.

Wow. I wanted that kind of heat to burn up the pages of this book. How was I going to incorporate a Latin dance into a story about architects, baby boomers and a housing development? I started by having them both enjoy the dance and do it well. They discover their mutual interest at the birthday party for their boss, a baby boomer. His friends, also boomers, observe these two “kids” on the dance floor and want to learn the dance for themselves. Aha! My H/H take advantage of the boomers’ interest by setting up a dance class so they can observe their quarry and learn more about their retirement dreams.

That’s the book’s connection to the Salsa. Check out the book to learn how the dance “saves” things for their project.

Once I went with this title, it only made sense that the next two books in the series carried the names of dances as well. I’m currently working on Book Two, Tough Enough to Tango. Book Three is tentatively titled Not Your Mama’s Mambo. I hope “Dancing with the Stars” continues a few more seasons, so I don’t wind up taking dance lessons myself!

Giveaway:
I’m giving away a pin of two dancers to commemorate the release of this book. (Drawing open to U.S. residents only.)

Saved by the Salsa

Junior architect Lacey Rogers welcomes the opportunity to work with Jack Dalton, the firm’s golden boy, that is, until her hormones can’t resist his charm and spectacular looks. How can she keep her mind on their design project when her most potent designs are on him?

Jack Dalton has always worked alone. Now he’s got a partner. Is he losing his touch? Is that why he hasn’t been named principal yet? To make matters worse, he can’t take his eyes off the petite piece of fluff. If he can’t find some way to cool his jets, he won’t be able to keep his hands off her either.


But on the dance floor, their mutual resistance melts as their bodies meet in the vibes of the Salsa. Can the dance keep them collaborating after the music ends?

Excerpt:
Jack took them through routines she had never encountered despite numerous visits to Salsa clubs. But she met him step for step, exhilarated by the challenge. Jack’s eyes burned. Her skin glistened from the exertion and the heat of the moment.

They floated and swirled, awash in the music, but her eyes couldn’t leave Jack’s. If possible, the glint from earlier had sharpened into the undeniable look of desire every woman instinctively recognized. In response, strange sensations pulsed through her body— sensations which blended physical arousal with emotional need while her heart pounded in rhythm to the Latin beat.

She noted vaguely how the crowd parted to make room for them. When the dance ended, the two of them stood there, chests heaving, suspended in a moment only they shared.
A wave of applause broke the spell, as other couples came up to congratulate them.
“You were fantastic!” a fiftyish-looking woman cried.

The man with her chimed in. “The couple on our CD does similar steps, but I’ve never seen them done in person. You guys are great.”

“How long have you been dancing together?” another woman asked. “You were so well synchronized.”

Fanning her face, Lacey didn’t know what to say. “Uh, well, uh, no…it was spontaneous.”
Apparently Jack’s lungs had survived better than hers as he was able to address the crowd. “My partner’s still a little winded, folks. We’re giving a class, if you’re interested. Monday night at seven. Mackenzie and Associates.” Announcement delivered, Jack grasped her hand and led her back to their table.

“A class?” she gasped between breaths. “Are you crazy?”

“I enjoyed dancing with you too.” He pulled out her chair for her. When she was seated and he was in his own chair, he leaned across the table conspiratorially. “Did you happen to notice anything our group of admirers had in common?”

She chugged down her entire water glass before replying. “They were able to breathe normally?”

Author Bio:
Barbara Barrett spent her professional career as a human resources analyst for Iowa state government, and that training has stayed with her in her writing of contemporary romance fiction. Now retired, Barbara spends her winters basking in the Florida sunshine and returns to her home state of Iowa in the summer to “stay cool.” She has published two romance novels with The Wild Rose Press, And He Cooks Too and Driven to Matrimony. A third, Saved by the Salsa, the first in the Sullivan’s Creek series, will be released August 8.

Married, she is mother to two grown children and seven grandchildren. When not writing, she loves taking in the latest movie, having lunch with friends and playing Mah Jongg.

Giveaway ends 11:59pm EST July 31st. Please supply your email in the post. You may use spaces or full text for security. (ex. jsmith at gmail dot com) If you do not wish to supply your email, or have trouble posting, please email maureen@JustContemporaryRomance.com with a subject title of JCR GIVEAWAY to be entered in the current giveaway.   US postal addresses only.