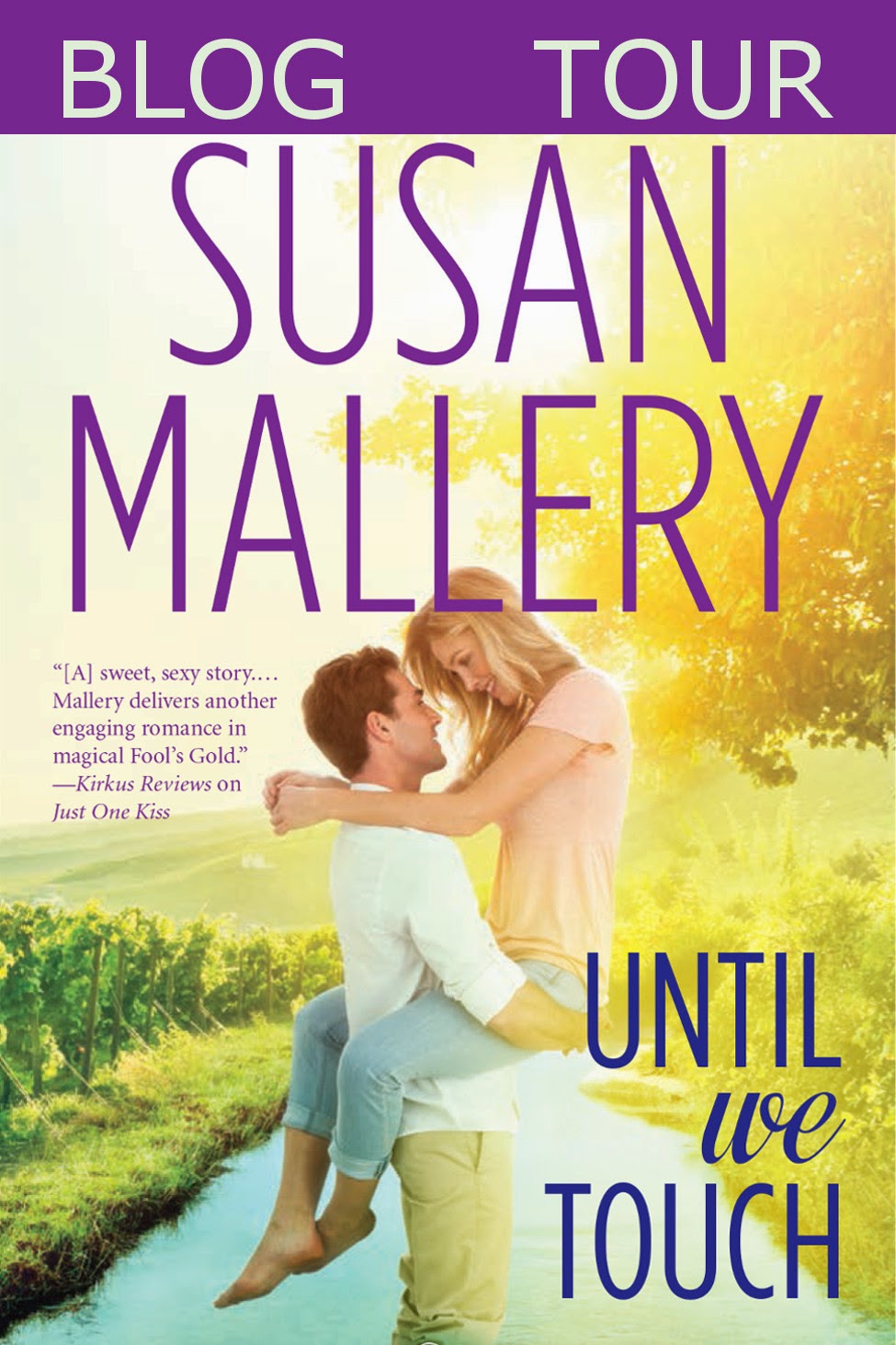 1. In what ways do you think every woman can relate to Larissa Owens?

Larissa is a sweetie. She’s not rich; she’s working as a personal assistant and personal masseuse for Jack. She gets to go to work in yoga pants and touch sexy guys all over. (Dream job!) UNTIL WE TOUCH is my nod to the boss/secretary story, one of my favorite kinds of romance.

Larissa has a pure heart, and when she sees someone hurting, she doesn’t just think about helping. She does help, with whatever resources are available to her. Fortunately for her, since she’s been working for Jack, he has allowed her to use his wealth and connections in service to her causes. In fact, he likes it. With Larissa using his money to try to save the world, he can feel like a part of something without actually putting himself out there. It’s a very comfortable arrangement for them both… until Larissa’s mom tells Jack that Larissa is in love with him, and everything changes.

2. What about Jack McGarry makes him like no leading man we’ve ever seen before in Fool’s Gold?

I think what makes people relatable—both in fiction and in life—are our imperfections and our vulnerabilities. From the outside, Jack’s life appears perfect. He’s rich, handsome, famous. He was a pro quarterback who retired on top and is now experiencing the same phenomenal success in the private sector with Score, the PR firm he co-owns.

But Jack has a secret pain that makes him protect himself from feeling too deeply, from caring too much. He lost someone dear to him when he was young, and he felt responsible. The lesson he took from that loss was that it’s safer on the surface.

Larissa works for him, so she knows he’s not a good bet when it comes to relationships. She has watched a string of temporary girlfriends come and go. She even bought the parting gifts. Despite that, despite her better judgment, she likes the man. He’s a good guy, a great friend, and he’s the sexiest man she’s ever met.

3. If UNTIL WE TOUCH were made into a movie, who would you envision playing Jack and Larissa?

I’m going to go with Chris Pine with black hair and Amy Adams as a blonde. (We must keep the Hollywood hairstylists employed!) Both could handle the funny scenes and the moments of honest emotion.

Of course, one of the funniest scenes in the book would probably have to be cut in order to keep the R rating. No spoilers, but I will say that Larissa is a massage therapist, and as their feelings for each other change, new situations—ahem—arise.

4. Larissa keeps her romantic attraction to Jack a secret at first, before her mother spills the beans. Do you think you should ever keep that secret from a friend you’re falling for, or is it better to confess your love?

In the case of Larissa, she didn’t realize she was keeping a secret… she kept her feelings a secret even from herself. Until her mother’s assertion, Larissa didn’t think she was in love with Jack. Just by saying those words, Larissa’s mom changed everything. These two friends and colleagues are suddenly thinking of each other in a whole new way. Which is inconvenient, to say the least.

As for whether someone in real life should keep her feelings for a friend secret or confess all, I’d have to say it really depends on the situation. Friendship is the best foundation for lifelong love, but not all friends-to-lovers stories end happily. I think you’d need to examine your heart and ask yourself, honestly, what is the best action for you to take.

5. You have written well over 100 books. How do you keep developing such unique storylines and characters that keep your fans coming back for more?

It’s a challenge! The truth is, every love story is unique. We all know dozens of couples who met, fell in love, and married. The framework may be similar—first glance, first kiss, deepening feelings, declaration of love—but the nuances are different. Which means that as a writer, I need to start with the nuances and build from there. What makes these two individuals unique and uniquely suited for each other? What events in their past color their actions and emotions today? As I develop their characters, I look for aspects that put them in conflict with each other, but also for aspects that will make them a couple you can believe will make it for the long haul. The conflict has to last nearly the length of the book, but the things they have in common have to take them through the rest of their lives.

6. What do you think is the recipe for a perfect romance novel?

A perfect romance should carry you away from your everyday world and fill you with emotions as you read. When you put down the book before you’re finished, it should call to you. Chores can wait, dinner can wait. It should be a challenge for you to turn off the light to go to sleep, even when it’s way past your bedtime. You should want to read just one more chapter, and then just one more after that, and then just one more until you’re done because you can’t bear to put it down until you know the characters are happy and in love. And when you do finish this perfect romance, you should feel happy, with a renewed feeling of faith in the power of love to overcome all obstacles.

Next up, Kenny and Bailey will fall in love in YOURS FOR CHRISTMAS. Readers are in love with Kenny already, started asking for his story right away. He was introduced in WHEN WE MET, and readers could immediately sense that there are hidden depths beneath his happy-go-lucky façade. Kenny is one of Jack’s partners at Score PR. What he wants more than anything is a family, but he was burned badly by an ex. The one thing he won’t do, no matter what, is fall in love with a single mom. And then he meets Bailey…
YOURS FOR CHRISTMAS was originally slated to be an ebook exclusive novella. However, Harlequin has decided to release it simultaneously in print on October 28. It will be printed at the back of the mass market paperback reissue of CHRISTMAS ON 4TH STREET. Both YOURS FOR CHRISTMAS (ebook) and CHRISTMAS ON 4TH STREET combined with YOURS FOR CHRISTMAS (print and ebook) are available for pre-order now.

I’m going to soak in as much of this rare and precious Seattle sunshine as I can before the rainclouds descend again! Seattle in the summertime has to be one of the most beautiful places on the planet. I swear, there are a million shades of green, and every single one of them is on display as we walk the dog around the city. 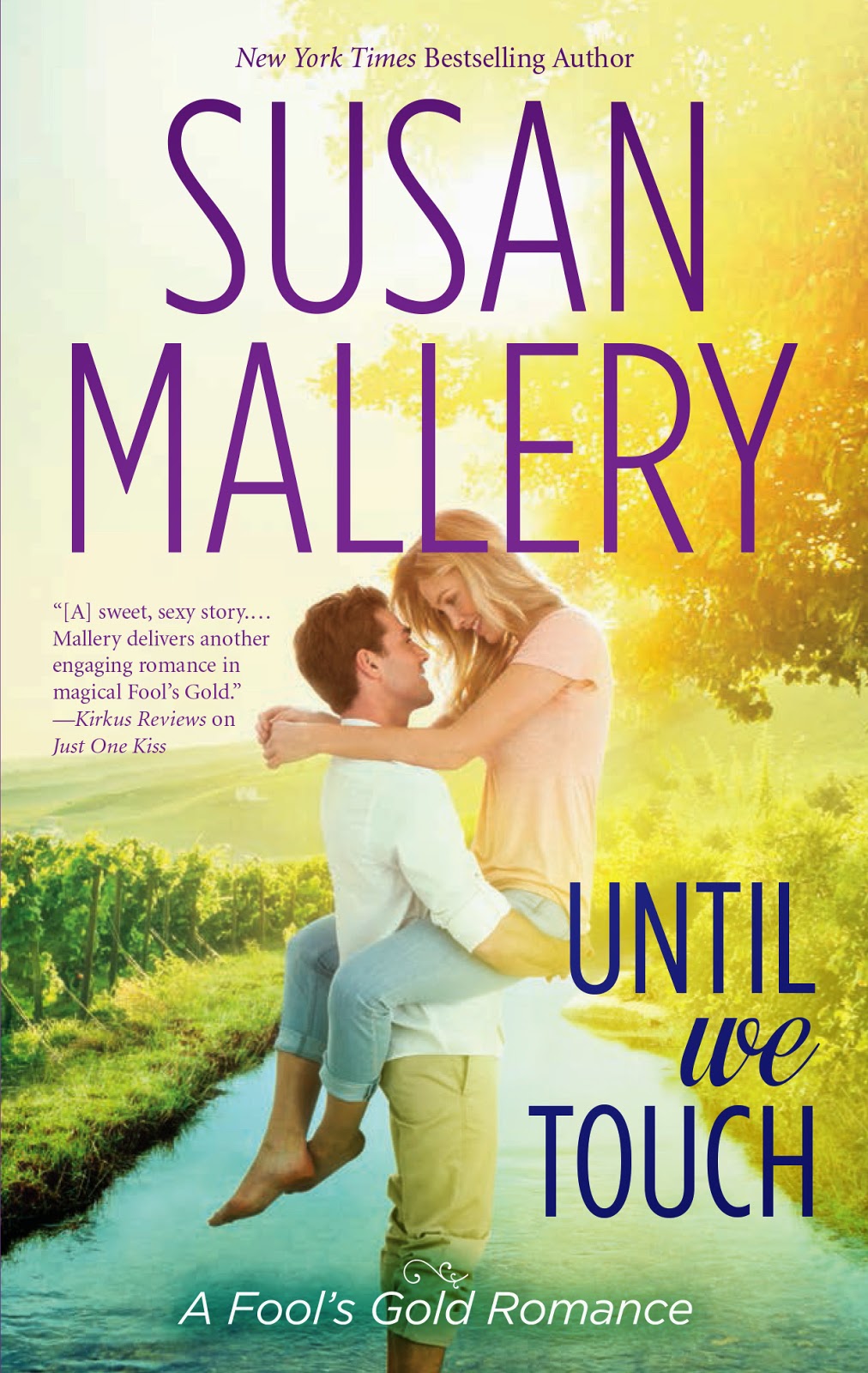 “Susan Mallery is one of my favorites.”

“Both smile and tear inducing. Mallery is one of a kind.”
—RT Book Reviews

After a family tragedy, former football hero Jack McGarry keeps the world at arm’s length— a challenge now that his PR firm has moved to neighborly Fool’s Gold, California.  Larissa Owens knows where she stands—Jack sees her as just another one of the guys. No matter what her heart  wishes, Jack’s her boss, not her boyfriend. But then Larissa’s big secret is revealed—by her mother!

When Jack discovers the truth about Larissa’s feelings, her touch suddenly becomes tantalizing, and he’s not sure he wants to resist. But if he gives in to desire, heartache is sure to follow. Friendship or true love—will Jack go for the ultimate play?

SUSAN MALLERY is a New York Times and USA Today bestselling author who has entertained millions of readers with her witty and emotional stories about women and the relationships that define their lives.  She has published more than 100 romance and women’s fiction novels beginning with two books the same month when she was just out of college. Susan has a bachelor’s degree in accounting and went on to get a master’s in writing popular fiction and has extensively studied story structure in screenwriting courses.  Her goal, always, is to give readers a story that will move them, populated with characters who feel like real people. Born and raised in California, Susan now lives with her family in Seattle, where she survives the dreary days of winter with the help of a “happy lamp” and plenty of coffee.