We All Have to Start Somewhere

Congratulations to "Marcy S." the winner in Christy's giveaway. Thank you to all who participated.

I am always fascinated  when I read about writers’ professional lives before they became  writers, running the gamut from waitresses, lawyers, marketing managers, college professors and police detectives, to name a few. My path to writing began in television as a weather person in Columbia, Missouri--definitely not my chosen role in TV news but at least it got me into a studio and on a news set. Anchoring the news was my ultimate goal, so this was a start. At the time, the weather set was fairly unsophisticated. I controlled the rotation of my three weather boards by stepping on a foot pedal on the floor. Back then, there were no computer generated graphics and I showed weather conditions with low tech magnets depicting the sun, rain showers and tornadoes on the state map. One dark and rainy day, during early news, we faced one problem after another. The news and sports anchors were fuming because the wrong video clips kept coming up. We were all tense and wondering what else could possibly go wrong.

I had four tornado magnets on the board and one sunshine up at the top of the state map. When I began my segment, the sun slithered south on the state map knocking each of my tornadoes off the board. The anchors were snickering at me and, though I was biting the inside of my mouth to keep from laughing, I lost it, too.  We all dissolved into a mass of laughing hyenas. The GM happened to be in the control room and was not happy. During the break he came into the studio. Before he got a word out, the sports anchor vehemently voiced his displeasure about the constant mistakes made on his baseball video clips. It became so heated, the sports guy stalked off the set declaring, “I quit.” The GM said, “Christy, you’re doing sports.” I didn’t know if it was desperation or punishment that prompted his words, but he ignored my protests and jabbed his index finger towards the sports position on the set.

Well, I use to be a girlie girl and knew next to nada about sports, with the exception of the Ohio State Buckeyes. I looked at the  Chyron to read the departed sports  anchor’s copy. We were in baseball season and as I butchered one name after another, like Bowie Kuhn, Moe Drabowsky and Tim Plodinec, I saw my brief TV career circling the drain. The minute we were off the air, the GM walked into the studio and I readied myself to be fired. Instead he boasted we’d had over seventy-five call ins complaining about me slaughtering the players’ names. He operated under the guise that there was no such thing as bad press. To my amazement, my job still belonged to me.

A year later I got a break and went to work as a reporter and morning news anchor for an ABC affiliate in Ohio, my home state. I was on the right path now.  It was a very stimulating and exciting job, especially for a twenty something, single woman. In the news department, besides our daily assignments, reporters had to do two evergreen stories a month. These were timeless human interest stories that could be used as filler on light news days and, because of the creative latitude, I loved doing them. Because of my interest in creative, I had the opportunity to write and produce some local advertising spots for the station’s in house accounts. In my mind a thirty second TV commercial was basically a mini story that sold a product. Commercials were fun to write and produce but I wanted do to more. When an opportunity to join an advertising agency came about I made the decision to change career paths. Between working at the ad agency and doing free lance work on the side, my professional life as a copy writer took off. I wrote and produced everything from TV/radio commercials for local shopping malls to a syndicated radio show for a national hearing aids company.

Beginning in my teens, I became a voracious reader, cutting my teeth on Nora Roberts, Jude Deveraux and Susan Elizabeth Phillips. Could I expand my talents and become a storyteller, too? Romantic Times was holding a conference in Savannah—at the time I lived in Athens, Georgia. Without any knowledge of RWA, or writing and publishing, I signed up to go. When I arrived, I felt like a fraud. Just because I could write TV commercials didn’t mean I had the talent or fortitude to be a successful fiction writer. Propelled by a fresh wave of self doubt, I scurried through the busy hotel lobby, passed Fabio posing with his adoring fans and up to the sanctuary of my hotel room. I’d made a horrible mistake in coming. These women were writers; I was a hack compared to them. They would sniff me out and know I was a fake.

Then I remembered the sales pitch I’d given my husband about why I wanted to attend the conference. There were many solid reasons I was here. With resolve I chastised myself for being such a chicken and changed clothes to attend the welcome cocktail party. I still remember getting on the elevator, my nerves a jangled mess. I almost didn’t see the older woman beside me.  She was from Oklahoma and had more than a dozen books to her name. When she learned I was a newbie, she reassured me that I would enjoy myself and she would introduce me to her friends. An hour and a half into the party, I was amazed at how much I had in common with these women. They had stories playing inside their heads, too. By the end of the conference two days later, my confidence was bolstered and my conviction to be a fiction writer was steadfast. I knew I was in the right place and I’d found my true calling. As writers we have to set new goals. Mine is to hit the big screen or a Hallmark or Lifetime movie. To be able to see my characters at the movies or on the small screen would be fantastic. Since I started out in television, I’m hoping I can get there again—if only to be a viewer. 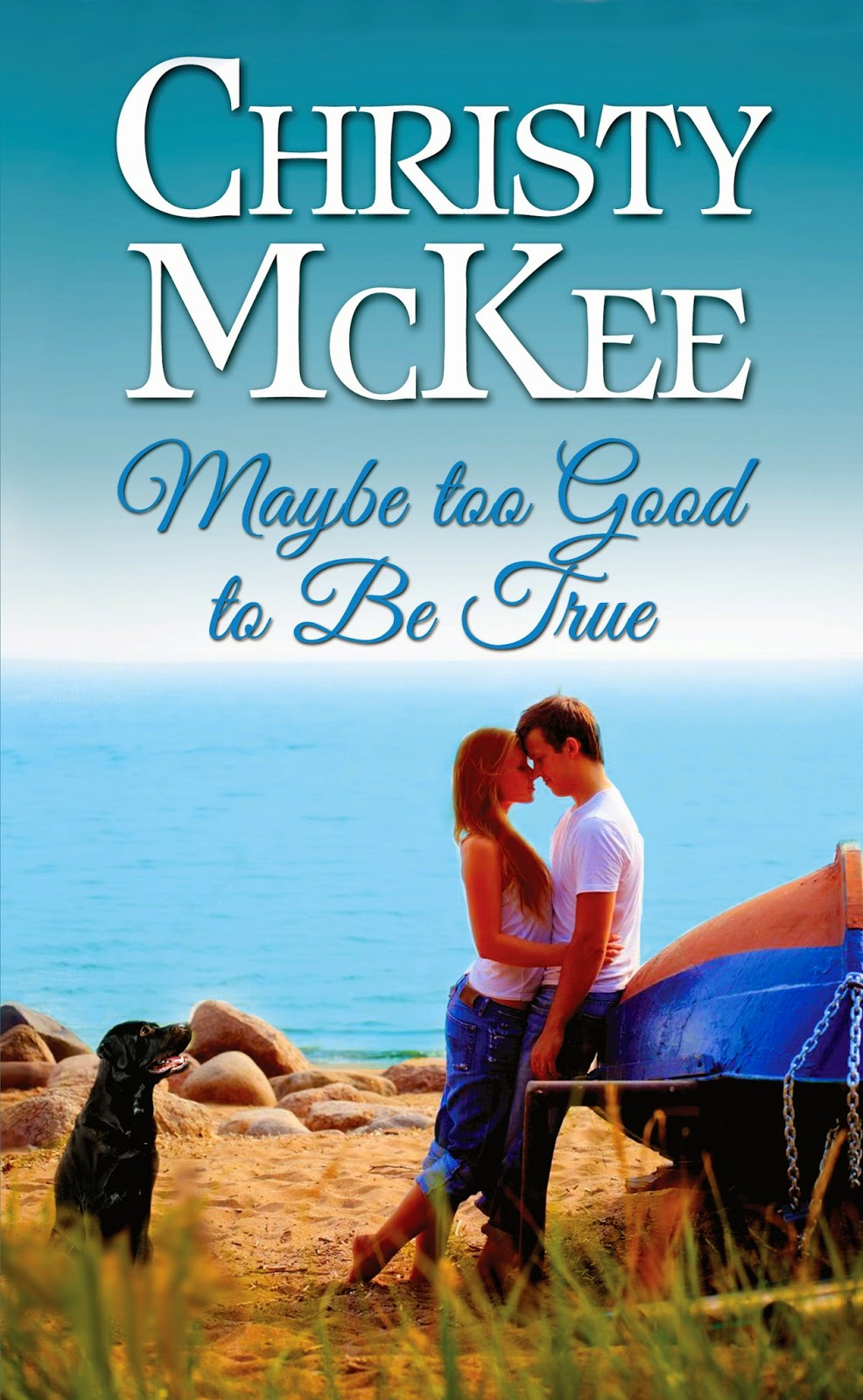 Maybe Too Good to Be True

Gabrielle March grudgingly returns to her small Georgia hometown to take up the reins of her late father’s newspaper.  Her career outlook is bleak and her finances desperately need resuscitating.  Out of the blue, a strange letter arrives that will change her future and rewrite her  past.

Instead of resting on his laurels and trust fund like many of his friends, Pierce Hastings
is a key player in the success of Atlantic-Hastings International.  When his mother tells
him she’s handing over a large block of shares to a beautiful stranger–he knows the lovely Gabrielle is up to no good.

Thankfully, first impressions are not always reliable.  Pierce and Gabrielle might discover they have more in common than they imagined, if only an old enemy of her father’s doesn’t kill her first.

Excerpt:
Pierce climbed back on his raft, trying not to let Gabrielle  know how pissed he was. Shit. First, he misses out on his favorite vacation of the year. Then, some nutso driver forces him to plow into his wild flowers and this monster dog destroys his day old sunglasses.
“So, how’s old Max going to make it up to me?” Let’s see how creative old Max’s imagination can be.
“He says he’ll be your jogging buddy for the rest of the weekend.” She threw his niece’s plastic yellow duck for Max to fetch. “You do jog, right? Because if you don’t, you definitely should,” her voice turned snippy. “Especially since your stomach is such a concern.”
It took almost all of his control not to pick her up and flip her ass over end. He ground his teeth instead. “Tell Max thanks for the offer. I do ten miles every morning. Think he can keep up?”
Her green eyes narrowed. “You? Ten, really?”
“Really.” So what if it was closer to seven; old Scarlet didn’t need to know that. He took hold of her float and pulled her up against his, startling her. With his other hand, he took her arm and pretended to examine it. “Free weights should help you shape these spindly arms of yours–give you some definition. There’s a fitness center at the house.”
Pierce was rewarded with the flash of anger in her eyes. “Why thank you, Mr. Hastings.” Honey could have dripped from her lips. “My boyfriend thinks I’m perfect.”
“Ah,” he said. “Probably a wimpy, nerdy kind of a guy. A writer, maybe,” he snorted.
Giveaway:
Christy is giving away a signed print copy of MAYBE TOO GOOD TO BE TRUE to one lucky person leaving a comment or email entry!

Giveaway ends 11:59pm EST June 13th. Please supply your email in the post. You may use spaces or full text for security. (ex. jsmith at gmail dot com) If you do not wish to supply your email, or have trouble posting, please email maureen@JustContemporaryRomance.com with a subject title of JCR GIVEAWAY to be entered in the current giveaway. US residents only!