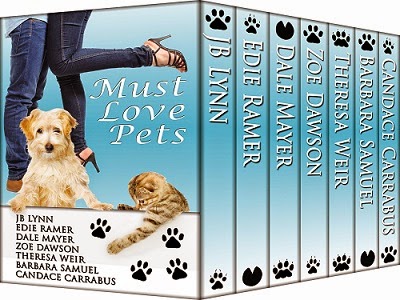 Candace Carrabus and Zoe Dawson—two of the authors included in the Must Love Pets: A Romance Box Set —are here to talk about the inspiration for our work.

Zoe and Candace are back to talk about what inspires them to write their stories. Zoe, you start! Your story in the Must Love Pets collection is Groomed for Murder. It’s the second book in your Going to the Dogs series, right?

Zoe Dawson:
Yes! My inspiration for writing Going to the Dogs is
Sex in the City. I loved the relationship between the women. Loved it! I wanted to be those women. But, I wanted something more in the stories, so I added furry friends, too. Then I thought I would make each book a light mystery surrounding the dogs. I knew they were going to be romantic comedies. And, guess what? I had never written comedy…ever, but I jumped in with both feet. Now I have 7 books done. It's crazy.

Groomed for Murder is the second book in the Going to the Dogs series. A bad poodle cut leads the owner to give Brooke Palmer an ultimatum. Fire the employee responsible or get sued. When Brooke refuses, Drew Hudson is assigned the case that will get him into that sweet corner office with partner added to his name. All he has to do is get her to settle out of court. Piece of cake, he thinks, until he gets a load of her and finds himself falling for her and her very cute bulldog.

The soft voice belonged to a woman who stood in the hallway leading to the kitchen. For a moment Drew couldn’t speak. There was a no-nonsense look in her eyes of luminous brown—eyes that hit him like a punch in the gut. The simple white blouse with a striped blue blazer and a pair of jeans that hugged her curvy hips and tapered down to…whoa, hot, high-heeled boots. Everything went with that no-nonsense look, except those boots. They weren’t no nonsense at all. She had that whole librarian/dominatrix thing going until he took in the pixie face, the glasses with the black, studious frames. She wore her dark hair parted in the middle and the silky mass flowed over her shoulders and down her back.

Her eyes darted to the dog behind him, who was barking menacingly. He glanced over his shoulder to discover a squat, powerful-looking bulldog. The dog lunged and Drew couldn’t move away in time. The pressure at the front of his thighs and the pull at his waist told him the dog had a hold of his pants. He tried to dislodge the beast, but it only growled more ferociously. Drew heard ripping, then the next thing he knew he fell forward as his pants gave way. He careened into the woman, and she half caught him as her back slammed against the wall, the air whooshing out of her.

Cool air wafted against his buttocks. He turned to find the bulldog still growling with the remnants of the pants in its mouth.

The pixie’s eyes narrowed as she pushed him off her. As fierce as Joan of Arc, she grabbed up an umbrella and brandished it like a sword. “You better answer me, mister, or I’ll sic my dog on you, and this time he’ll be after something more important than the seat of your pants.” 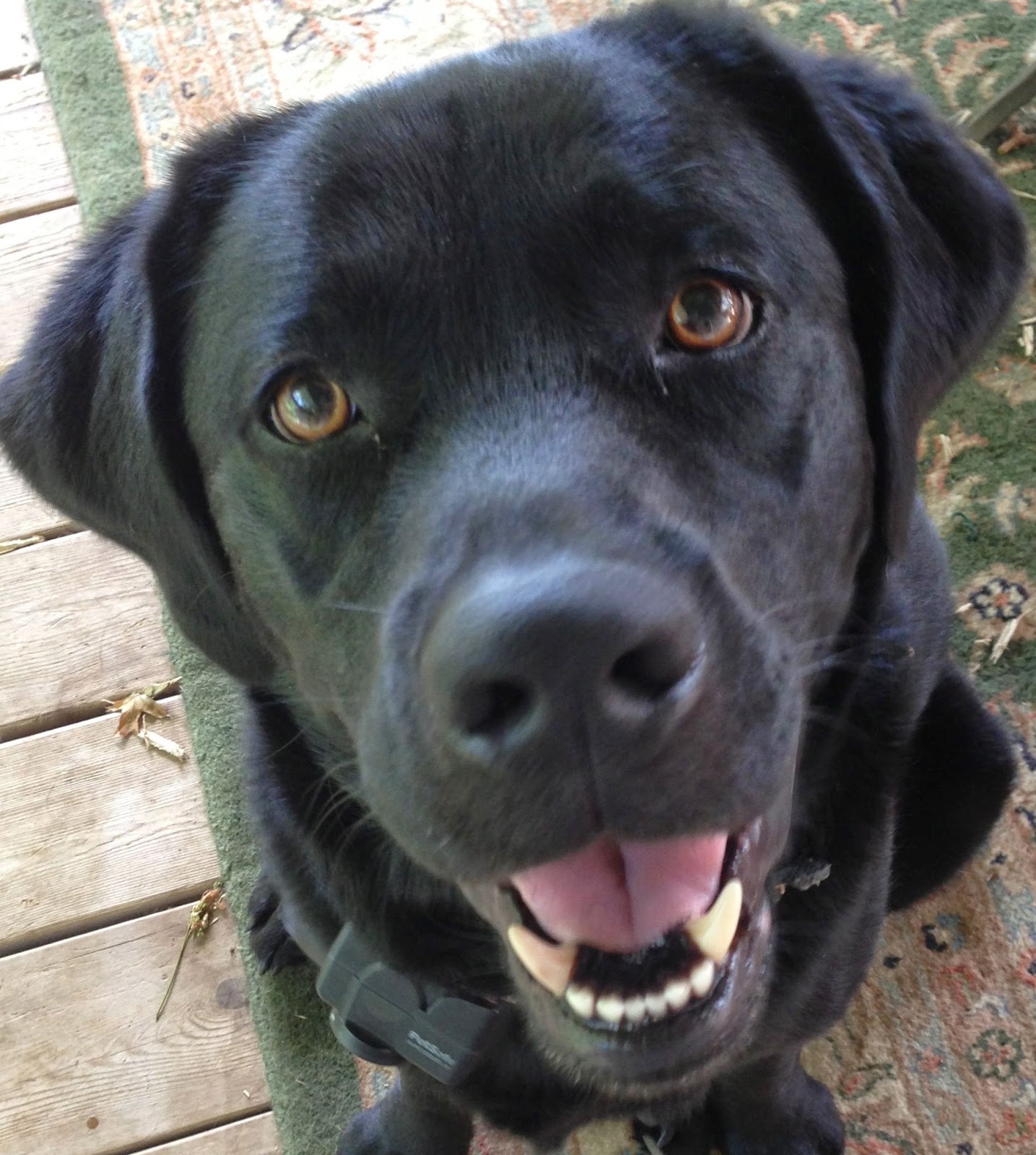 Candace Carrabus:
For The Man, The Dog, His Owner & Her Lover, I had a moment with one of my dogs. Our black Lab, Carlo. One of those moments when I looked into his eyes and he was looking back so intently, I started to wonder, what if... and the story just followed. Kind of like a puppy follows you around! This is a picture of Carlo.

The Man, The Dog, His Owner & Her Lover tells the story of Stephanie O’Hanlon, a 40-something workaholic, for whom a blank to-do list is crazy-making. When she gets laid off and rescues a huge, smiling dog from a shelter—a dog her friend insists is inhabited by Steph’s lover from a former life—she discovers the true meaning of crazy.

Gabe Fagen, handyman and crazy-in-love with Stephanie since they were teenagers, sees Steph losing her job as the chance he’s been waiting for. But will she notice he’s alive with a mysterious giant dog acting as her guardian angel?

Here’s an excerpt from right after Stephanie adopts William:

He licked my bleeding shin and looked at me with what could only be joy, his entire body wagging while his long tail knocked candy bars off the shelf behind him. Something lurched in my chest for the second time in less than an hour. Tears pricked my eyelids for the umpteenth time that day.

I know I’m cut off from my emotions and have no idea what love is supposed to feel like, but I’m pretty sure that’s when I fell. 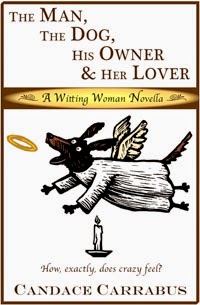 Zoe Dawson:
That sounds like a great story! It has been so much fun writing these stories with the animals included. I’m very proud of my body of work there. The Sex and the City inspiration of the friendships really worked well in the stories. Even the guys who got involved with my dog park babes ended up being friends. Even best friends. I feel like I know all these people. I have one novella left, Captured. It’s a companion novella to Collared. I’m going to be very sad when I finish it.

Candace Carrabus:
On to bigger and better stories! The Man, The Dog, His Owner & Her Lover is the first novella in The Witting Woman series about women coming to believe in themselves. The next one is The Good Horse, The Bad Man & The Ugly Woman. All are stories about women of a certain age <ahem> coming up against something so foreign to their existence, something that throws them for such a loop, that they are forever changed. Each story includes an animal and a light romance.

These stories are inspired by my belief that anyone can change anytime, and that animals are often the bridge between us and our deeper selves. They straddle the veil.

Zoe Dawson:
What you just said is so inspiring! I like to think that our stories are behind that veil and we go there when we’re writing and pull from it like a beautiful, deep well. It’s amazing how authors all have the same kind of experience when they write. It’s almost as if we’re all connected to that great big spring! Inspiration can come from anywhere. I had the title A Perfect Mess. Saw it somewhere and wrote it down. Had it sitting on my computer for months, then I decided to work a whole series around it. Created three hot bayou boys and the perfect girls who wanted them. Viola. A Perfect Secret Series was born.

Candace Carrabus:
Hey, Viola is the name of the main character in my Dreamhorse Mystery series! But that’s another story...hehehe. A Perfect Secret looks like another great collection of books. You’re on fire!

Well, I’m feeling inspired to grab a cup of coffee and get some writing done. How about you?

Zoe Dawson:
So inspired! I’m currently working on A Perfect Dilemma which will be out in August. I’m on chapter four and loving it so far. The characters in these books are so fun. Fresh, coming of age young’uns just beginning their lives and trying to figure everything out. Loving it. What are you currently working on?

Candace Carrabus:
I'm working on Dreamhorse Mystery #2--a continuation of the adventure started in On the Buckle. It's called Wrong Lead. If you're a horse person, you already know those terms, and if not, you'll figure it out soon enough! Being a horse person is NOT required to enjoy these books. The Dreamhorse Mysteries were partly inspired by my own experiences moving from the city to the country, the crazy mistakes I've made, and the funny characters I've met along the way.

We could talk on and on, and really enjoyed this conversation about inspiration. Let’s hear from you! What inspires you?

Leave a comment to be entered to win your choice of a free ebook from Candace and Zoe and check out Must Love Pets: A Romance Box Set, available for download everywhere for only 99 cents.

About Candace and Zoe:

Candace Carrabus: I've been writing stories and riding horses-frequently simultaneously-for as long as I can remember. I grew up on Long Island and spent my formative years in the saddle-just imagining. After high school, I traveled to Ness, England and studied at a British Horse Society training school. This was an all-around amazing experience. When I left, I clutched a certification to teach riding in my hot little hand, and I enjoyed instructing riders for many years. Who am I kidding? We know it is the horses who do the teaching. All we can do is try to remain open to what they have to say.

Not surprisingly, my fiction and non-fiction are both frequently infused with the mystery and spirituality horses have brought to my life. My philosophy, in brief: (No, not in briefs, but that's a nice image, thank you very much.)

We are all immigrants in spirit, with our minds, hearts, and souls being the final frontier. You can find me at the following links:

When she's not busy with writing or her full-time job, she's painting or killing virtual mmorpg monsters, where getting armor for her characters is better than jewelry. She lives in North Carolina with her two grown children and one small, furry grey cat.

You can find her at the following links: