Congratulations to "Kai", the winner of Robyn's giveaway. Thank you to all who participated! 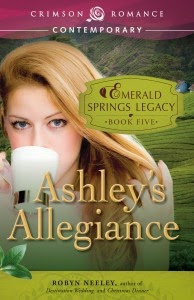 I'm so excited that Ashley's Allegiance, the fifth and final book of the Emerald Springs Legacy continuity by Crimson Romance, released on Monday, June 2!  In traditional continuity fashion, each book in the series was written by a different author.

I had a blast playing in the amazingly awesome world that the other authors created. I would joke with my friends that it was like living out my secret dream of writing for the Young and the Restless. All of the Newmans - I mean Whitmans - were so fun to incorporate into Ashley's story and have several scenes including one last hurrah.

From the three hot Whitman brothers - my fellow continuity authors and I debate which one it is (It's Adam) - to the sexy, sassy, and confident heroines, these books are a fresh take on popular tropes that all of us love. This summer, join us in Emerald Springs. The tea and beer are both brewed and waiting for you!

Here's an excerpt from Ashley's Allegiance!

Slipping out of the resort’s comfy, white bathrobe, Ashley stepped into the mudbath. She would have preferred to go in naked, but didn’t want to completely freak Graham out if, by some off chance, he didn’t respond the way she’d hoped. She’d put on a bikini she kept in her locker when sun bathing at the resort.

It would probably be ruined from the mud, but this occasion was so well worth it.

She took in his hot body for a second: long, muscular, and so needing to be touched. A Blake Shelton song was coming out from his earbuds. Awesome. A bonus that he liked country music as it was her favorite, too. The more she learned about his interests, the more she knew they were well-suited for each other.

She waded over, letting the green tea-infused mud saturate her skin. The warm grains immediately relaxed her. It had always been her favorite treatment, and somehow being in here in the romantic candlelight with an unsuspecting Graham made it that much more fun. She snuck up behind him and placed her hands on his shoulders and began to rub. Needling his neck, she grabbed a handful of mud and exfoliated his back.

Wow. She knew he had a dark tan from working in his tea fields, but his shoulders were so broad and muscular. She hadn’t realized this. His business suits always made him appear a little on the lanky side, but he was, without a doubt, solid. A definite bonus. Now all he needed to do was turn around and wrap his tight biceps around her.

Without saying a word, he cocked his head to the side, which she took as a nonverbal approval to her teasing his pressure points. If this was what he liked, she’d happily oblige. “Just thought you could use some help,” she breathed and swirled some of the mud across his back. “You know green tea mud is very arou—”

“Ashley?” She turned around and her mouth flew open.

Standing in front of her was Graham. Dressed in a black business suit, lanky arms and all.

She pushed back. “What the hell?”

The mud-caked stranger she’d just rubbed down turned around and pulled out his earbuds. “Jacob?”

“Wait! You have this all wrong.” Ashley attempted to get out of the tub. She slipped and fell face first into the mud. Jacob’s muddy hands went immediately to her waist, pulling her up.

She fought to free herself from him and regain her composure. “Don't touch me,” she yelled. “Graham, I can explain.”

“I’ll be at the coffee bar working.” He exited, and Ashley turned to Jacob, ready to let him have it.

He inched closer, his mud-crusted chest looking just as inviting as his back had. Any verbal combat she planned to launch had decided to ignore her orders and ceased fire. Jacob touched her cheek with the back of his hand, flinging some mud away. That single stroke sent a shiver down her spine.

He leaned in and her mouth parted. Ashley’s inner voice sent her a blaring warning message.

Her gaze rested on the candle flames flickering over his beautiful, full lips. She really should be chasing after Graham, not waiting for Jacob’s mouth to press up against hers. But for reasons she couldn’t explain, there was no place she’d rather be.

Giveaway
Name Your Tea! Whitman Tea is a big secondary character throughout the series with names such as Cheery Berry Spice and Morning Glory. If you could name a tea, what would it be? Comment here for a chance to be entered into an ongoing contest for a $25 gift card to Sephora. Winner will be announced on our Emerald Springs Legacy Facebook Page on June 11. For this blog, I'll also choose one winner to receive a complimentary e-copy from my backlist.

Giveaway ends 11:59pm EST June 5th. Please supply your email in the post. You may use spaces or full text for security. (ex. jsmith at gmail dot com) If you do not wish to supply your email, or have trouble posting, please email maureen@JustContemporaryRomance.com with a subject title of JCR GIVEAWAY to be entered in the current giveaway.
Posted by Maureen A. Miller at 12:30 AM