Sometimes the ship really does run out of eggs…

Congratulations to "Marcy S.", the winner in Rogenna's giveaway. Thank you to all who participated.

This is my first Harlequin SuperRomance cover without a uniform.  I kind of like it since my hero walks a fine line between the uniform and being an undercover operative.  In fact, you might call him an antihero.  He’s been convicted of murder and has his own agenda when he makes a deal with the Feds.

Writing a hero out of uniform gave me room to breathe.

I’m a by the rules kind of gal, kind of like my heroine.  But this post isn’t about Navy rules and regs and uniforms. This post is about truth being stranger than fiction.  As a military vet writing about military, I get called to task by readers for some of the strangest things.

Those little nuggets that sound so far fetched on paper are usually when I’m writing from my own experiences.

My first SuperRomance featured a female Navy SEAL.  I knew in order for the Navy to implement something like that my heroine would need support from someone much high up the chain and there would have be a feasibility study with a test subject or two.  I knew there would be opposition in the form of the hero and that congress would have the final say.

I wrote that story long before the movie G I Jane.  Here I thought I was being so clever making the real opposition a backstabbing woman with political power.   When the movie came out my book was already on an editor’s desk.  I called in a panic, but she assured me that wasn’t necessarily a bad thing and my book went on to do quite well.

However, I was unprepared for the backlash from readers and writers who knew there were no female Navy SEALs and were unwilling to accept my take on reality.  Rumors got so bad and twisted that readers showed up at my book signings expecting to see a 6’ tall redheaded Navy SEAL.

I’m not even a real redhead.

But I’d worked in the Pentagon’s Navy Annex and even back then the women in combat debate had been going on for years.  The reality after two gulf wars is that women are already serving in combat and Congress has opened special ops to women as of 2016.

I was just a little ahead of the times.

I mention this because although it seemed far-fetched at the time it really wasn’t.

I’ve been called out on everything from writing about running out of eggs on the ship to first date marriages of convenience.  Well, guess what?  I’ve been on the receiving end of a “marriage of convenience” proposal.  I’ve also received more than one first date “real marriage” proposal.  And while I ran as fast and a far from those sailors as possible, it’s a lot more fun to put the screws to a fictional hero or heroine.

I’ve never been in the Witness Protection program.  But I once met someone who claimed to have been.  Her husband had died under mysterious circumstances and her adult daughter had been killed in a car accident.  So this woman was either paranoid delusional or had every reason to be paranoid and simply didn’t care anymore who knew her secret.

But that’s the kind of thing that sticks with you and germinates in the back of the brain.

Through research, I discovered there are some 10,000 families in the Witness Protection Program.  That made for an interesting story question.  Could this little family that had been torn apart shed their past and find peace?  I wrote myself into corners and back out again trying to find their happy ending.  I hope you enjoy the journey. 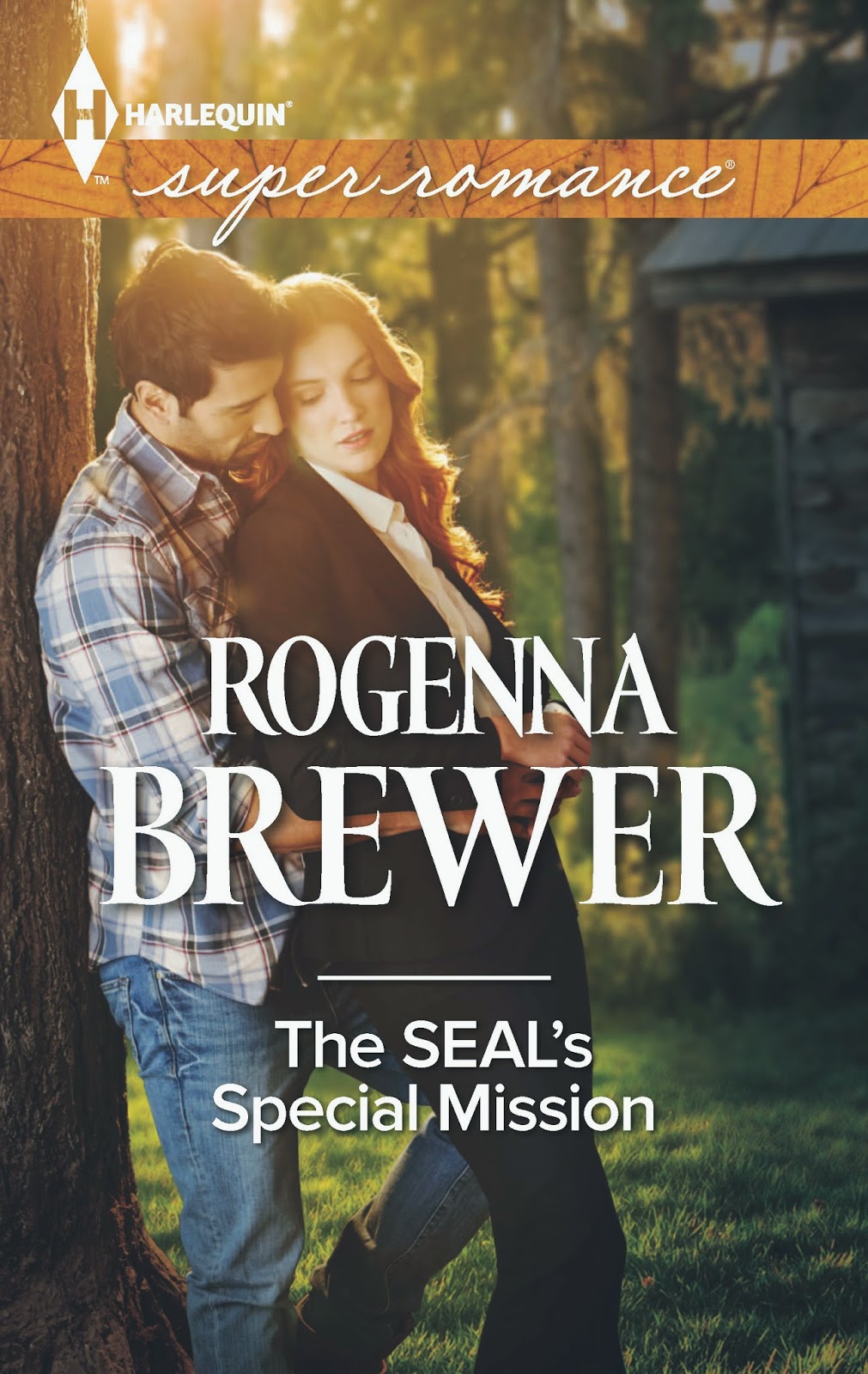 "You and the boy are coming with me."

Navy SEAL Kenneth Nash has one objective—protect the son he's never known. If that means dragging along his former sister-in-law Mallory Ward, then so be it. But while hiding out in a rustic cabin in the Rockies, Nash faces an unexpected problem.


Suddenly he's feeling things for Mallory that he has no right to feel. Regardless of how this turns out, he could never be the family man that his son and Mallory deserve. Yet as danger approaches, Nash and Mallory's attraction persists—and it could jeopardize the entire mission.

“Freeze!” Her voice shook almost as badly as the SIG Sauer in her hand. After twenty weeks of G man U in Quantico, Virginia, twenty-three-year-old rookie FBI Agent Mallory Ward never imagined facing down her first perp in her sister’s kitchen. “Freeze, Nash. I mean it, damn it!”

Her false bravado lost all conviction as she tried to comprehend the bizarre scene playing out in front of her. Her brother-in-law, covered in her sister’s blood, cradled a blue bundle in the palms of his hands.

“Dear Lord, Nash, what have you done?”

Mallory shook her head to clear it. She’d stepped outside for just a moment.

One minute Nash was giving her sister mouth to mouth. The next he was ordering Mallory to grab his cell phone from the pack he said he’d left outside the back door. When she couldn’t find his phone, she’d taken those precious extra seconds to grab hers from her rental car parked out front at the curb.

Mallory kicked past an overturned chair and stepped over the cordless phone unit that had been ripped from the wall. Her sister’s still-warm body lay lifeless on the cold tile floor where her brother-in-law had been performing CPR.

Mallory couldn’t remember if she’d punched 911 before dropping her cell phone to reach for her gun. Though only seconds, it seemed like a lifetime ago. She’d initially been willing to give Nash the benefit of the doubt when she stumbled upon him at the center of an obvious crime scene….

Until she watched the Navy SEAL slice the swell of her sister’s belly.

“You have the right to remain silent…”

“There was nothing more I could do for her, except save our son.” Nash dropped his KA-BAR in the puddle of blood.

Sidestepping the slick pool, Mallory still managed to leave the imprint of her sole behind. Biting back the copper tang of panic, she continued to read him his Miranda rights—Article 31 in the military. “Anything you say or do can and will be used against you in a court of law….”
Nash ignored her, concentrated on the little bundle in his arms. He covered the teeny nose and mouth with his own mouth. The tiny concave chest expanded and then contracted with each puff.

“Do you understand these rights as I have read them to you…?”

She couldn’t afford to make another rookie mistake.

Sirens blared in the distance—emergency responders, too late to save her sister. Mallory’s world spun out of control.

The tile floor rushed up to meet her. 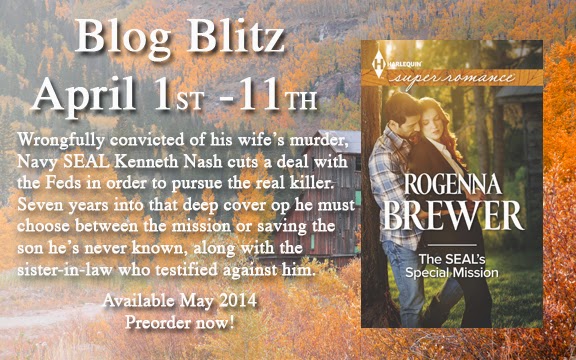 Giveaway:
One person leaving a comment or email entry will win an autographed copy of THE SEAL'S SPECIAL MISSION.

Giveaway ends 11:59pm EST April 11th. Please supply your email in the post. You may use spaces or full text for security. (ex. jsmith at gmail dot com) If you do not wish to supply your email, or have trouble posting, please email maureen@JustContemporaryRomance.com with a subject title of JCR GIVEAWAY to be entered in the current giveaway. US postal addresses only.