From Rejection to Publication: Don't be Afraid to Rewrite Your Story

When I first started writing contemporary romance, I took a lot of classes that taught writers the way to make your characters interesting and real was by giving them flaws.

Unfortunately, I kind of took that information and ran with it. Way. Too. Far. In fact, it got my book rejected by many editors and publishers.

This was disappointing because I really loved my characters and the story. It was a hard thing to do, but I had to take a good long look at my manuscript and see what needed to be changed.

Here are some examples of the things I originally started out with:
• Sabrina (the heroine) was secretary to Jack's father
• Sabrina wanted to marry a doctor just like her deceased father
• Sabrina was a stalker. The opening scene was of her spying on her fiancé (ex fiancé)
• Jack (the hero) was a smoker
• Jack was rude and had a life motto of never apologizing because it showed weakness
Gee, was there really any other reason needed to reject this book? LOL
So I reworked the story and managed to change a few things.

Here's what I rewrote:
• Sabrina (the heroine) was no longer secretary to Jack's father, but actually a well-respected internal mutual fund wholesaler
• Sabrina wanted to marry her ex-fiancé who broke up with her because she felt certain signs pointed to them being together since she was superstitious
• Sabrina was no longer a stalker (rewrote the entire beginning), although she does consult a psychic to see if she and her fiancé will get back together
• Jack (the hero) became an ex smoker, and he also came to have an unusual addiction to beef jerky
• Jack was still smart-mouthed and funny, but I gave him a sensitive side too—one he shows often in interactions with his family

Entangled Publishing loved the story and now here I am on Blog Tour promoting my book Fiancé by Fate!

Here's a little bit about it: 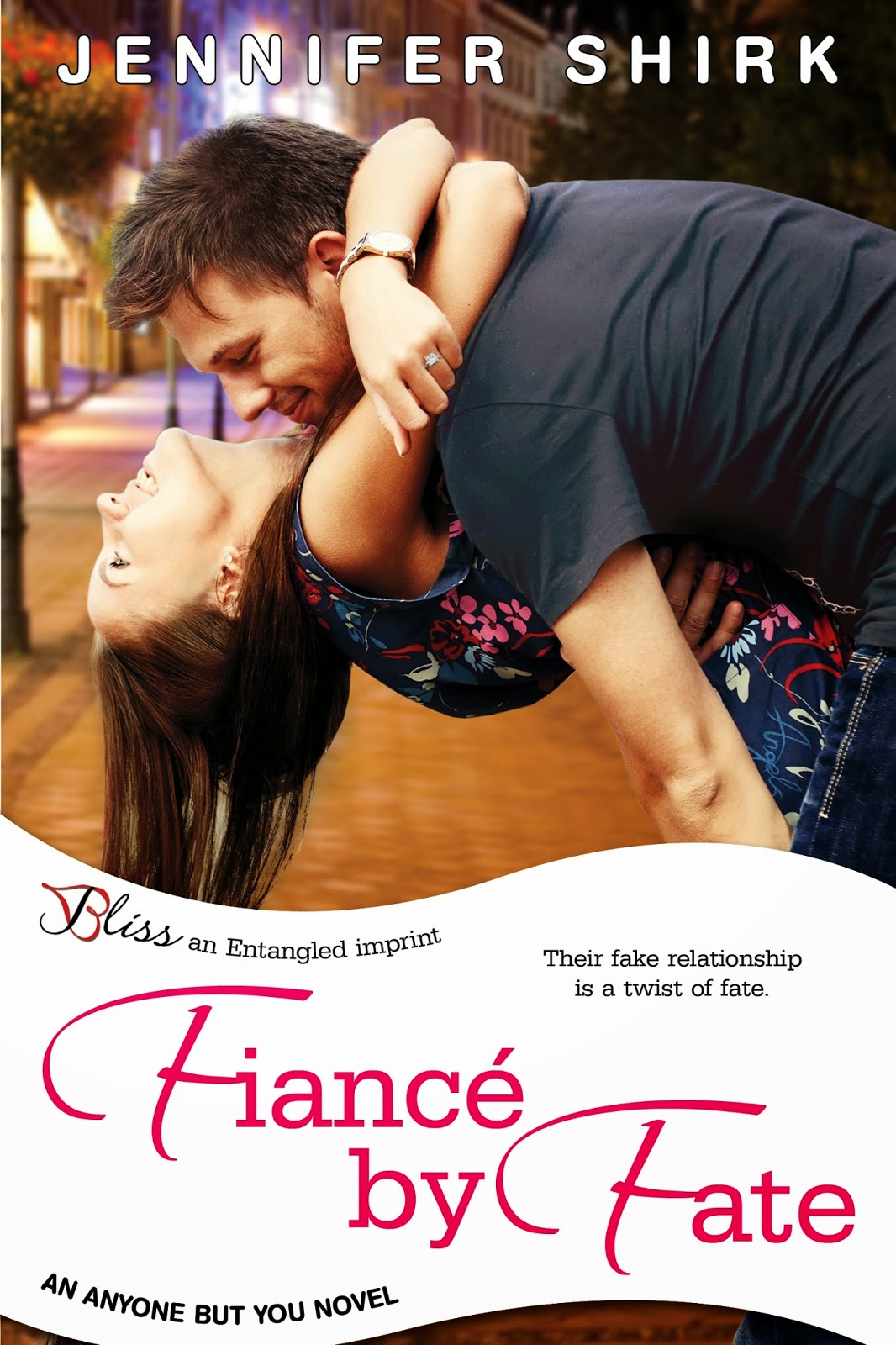 Their fake relationship is a twist of fate.

Sabrina Cassidy believes in fate. So when her fiancé breaks off their engagement, she’s convinced they’ll get back together eventually. But fate was not on her side when it brought Jack Brenner into her life—and work. Frustrating, gorgeous, and cocky, Jack has an offer that Sabrina can't refuse. Not if it means getting the life she’s always imagined.

Despite being one of the town’s most eligible bachelors, Jack has a reputation that’s working against him. He has to convince his father—and his company’s board—that he’s ready to settle down if he wants a promotion. But convincing Sabrina to be his fake girlfriend turns out to be the easiest part. What he didn’t count on was their intense attraction and how easily their lie would escalate.
Sabrina’s still hung up on her ex, and Jack will never settle down. But fate has other ideas…

Hope you all get to check it out!
Thanks so much for having me today!

Giveaway:
Question: I am not a smoker and never have been, but do you consider a hero who is a smoker taboo or not heroic? Or would it not matter? **Comment for a chance to win an ebook copy of Jennifer's new romance Fiancé by Fate!

Jennifer Shirk
About this author
Jennifer Shirk has a bachelor degree in pharmacy-which has in NO WAY at all helped her with her writing career. But she likes to point it out, since it shows romantic-at-hearts come in all shapes, sizes, and mind-numbing educations.

She writes sweet (and sometimes even funny) romances for Samhain Publishing, Avalon Books/Montlake Romance and now Entangled Publishing. She won third place in the RWA 2006 NYC's Kathryn Hayes Love and Laughter Contest with her first book, THE ROLE OF A LIFETIME. Recently, her novel SUNNY DAYS FOR SAM won the 2013 Golden Quill Published Authors Contest for Best Traditional Romance.

Lately she's been on a serious exercise kick. But don't hold that against her.
Feel free to follow her on Twitter or become a friend on Facebook.

Giveaway ends 11:59pm EST April 14th. Please supply your email in the post. You may use spaces or full text for security. (ex. jsmith at gmail dot com) If you do not wish to supply your email, or have trouble posting, please email maureen@JustContemporaryRomance.com with a subject title of JCR GIVEAWAY to be entered in the current giveaway.