Congratulations to "Susan W.", the winner of Marin's giveaway. Thank you to all who participated.

I'm a big fan of country music and I had a lot of fun picking which country western legends to name the heroes in The Cash Brothers series after.  Deciding to name one of the heroes after Willie Nelson was a no brainer—his song Always on My Mind inspired Will and Marsha's love story.

"If you start out looking at somebody, wondering whether he's good or bad, I think you're starting out in the wrong direction. I think we're all good and we're all bad." –Willie Nelson
This quote sums up the battle Will faces with Marsha's father who believes Will isn’t good enough for his daughter.  Will must face his own insecurities if he's going to prove the pastor wrong and claim his family.

BIO:
Marin Thomas grew up in Janesville, Wisconsin. She left the Midwest to attend college at the University of Arizona in Tucson, where she played basketball for the Lady Wildcats and earned a B.A. in Radio-TV. Following graduation she married her college sweetheart in a five-minute ceremony at the historical Little Chapel of the West in Las Vegas, Nevada. Over the years she and her family have lived in seven different states but have now come full circle and returned to Arizona where the rugged desert and breathtaking sunsets provide plenty of inspiration for Marin's cowboy books. 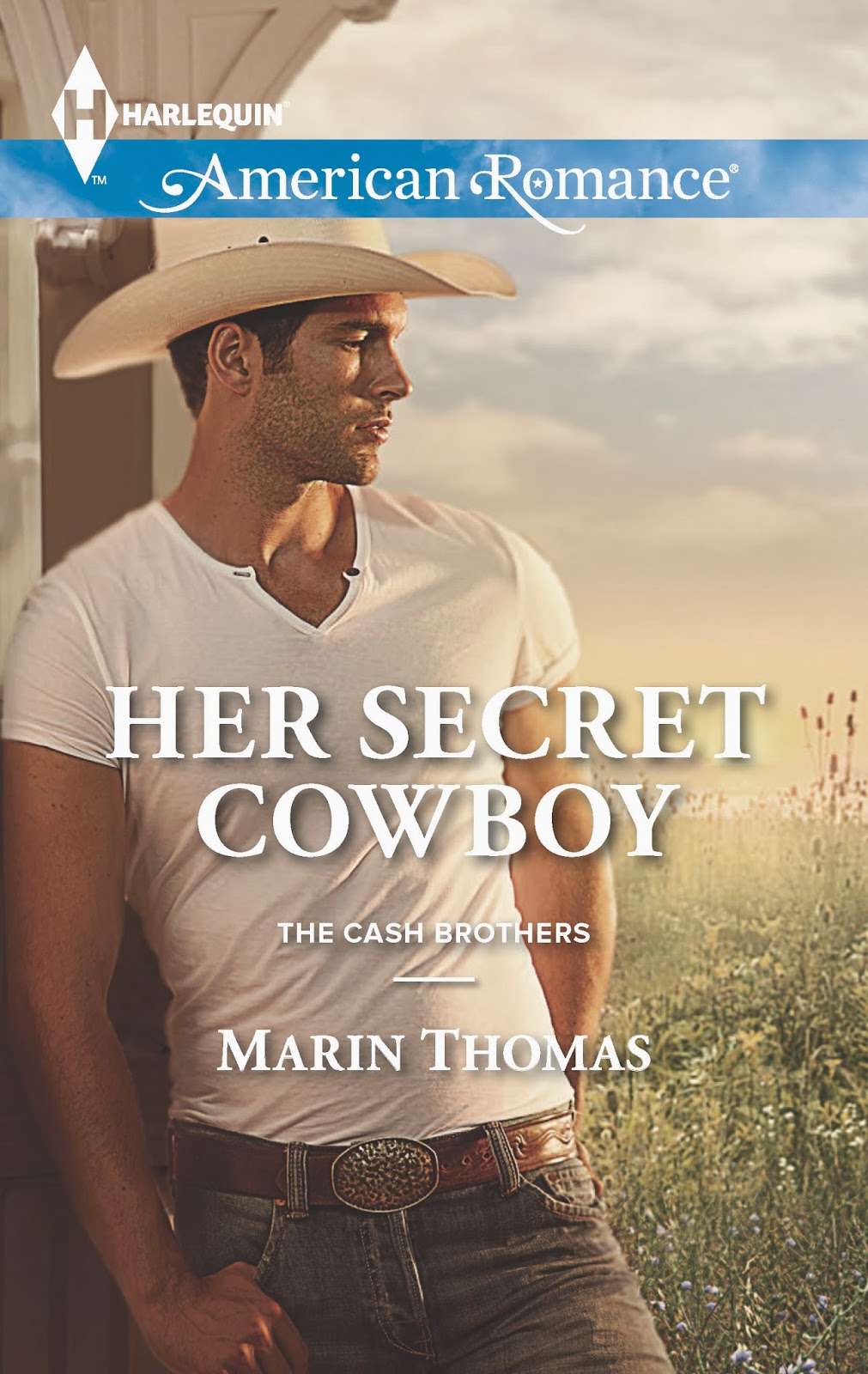 The Cowboy And The Preacher's Daughter…
Years ago, Will Cash wasn't interested in being a dad. So Marsha Bugler left town to raise her baby alone. But when her father's health begins to fail, she realizes she needs to return to Arizona—and introduce Will to his boy. Marsha is nervous to face Will not only because she lied, but because she's never stopped thinking about her cowboy crush.
Will is shocked to discover he has a son. And he can hardly believe the changes in Marsha. She's strong, sexy and a Ph.D. while Will's still a part-time cowboy living in a bunkhouse with his brothers. What does he have to offer her and his teenage son? Will has a lot to prove if he's going to get what he wants—the family he never knew he had.

Dear Will...He read a few more lines but the words blurred and a loud buzzing filled his ears. The kid in the picture was named Ryan and he was fourteen years old.

Slowly Will’s eyes focused and he studied the photo. The young man had the same brownish-blond hair as Will’s but his eyes weren’t brown—they were blue like his mother’s.

“Buck!” he shouted. “Get your ass out here right now!”

Will stared at the bunkhouse, afraid if he went inside he’d tear the place apart. When Buck came out, the rest of the Cash brothers and their brother-in-law, Gavin, followed.

Will ignored his eldest brother—if Johnny had his way he’d take control of the situation like he’d done all through their childhood. This was Will’s fight with Buck and no one else’s.

“What’s got you fired up?” Porter ran a hand through his shaggy hair and flashed his boyish grin—the one that stopped women from one to ninety-nine in their tracks. “Steam’s spewing from your ears.”

“Shut up, Porter. This is between me and Buck.” Will glared at his younger brother.

“I’ve never seen you this pissed.” Conway glanced at his brothers. “Maybe you ought to take a couple of deep breaths before you go off half-cocked.”

“Is that what you tell the twins when they’re itching for a fight?” Now that the handsomest Cash brother had settled down and become a father, he liked to believe he was the mature one.

“Conway’s right.” Mack’s deep baritone voice carried over the heads of his brothers. “Whatever’s got you riled, Will, it’s not like you to attack one of us.”

What Mack said was true, but Will had never been in a pickle like this before. His musician brother could write a song about the news he’d just received and make a fortune off Will’s misery. “This concerns Buck and me.” Will shook the letter. “You knew all along.”

Buck stepped forward, using his broad shoulders to push his brothers out of the way. “Knew what?” Of all his siblings, Buck was the quietest and through the years he’d assumed the role of family peacemaker. Too bad this was one dispute he wouldn’t be able to settle to Will’s satisfaction.

“She said you’d vouch for her that she’s telling the truth.”

His brother’s eye twitched—a sure sign of guilt. “The truth about what?”

“That after I got her pregnant and she kept the baby.”

The color drained from Buck’s face.

The tenuous hold Will had on his temper broke, and he let Buck have it. “You’ve kept in touch with Marsha since high school. How the hell could you not tell me that I had a son!”

Giveaway:
Have you read any of the Cash Brothers books? Which is your favorite so far?