Congratulations to "Emily B", the winner in KC's giveaway. Thank you to all who participated!

Thanks Maureen for having me on. I’m really happy to be here.

When I first started to write the Texas Fever series the character Nikki Logan was a bad girl on the wrong side of the tracks who liked to get into trouble by hustling people at pool.

At the time, I thought writing about playing pool would be fun and sexy. Being good at pool was something a true heroine, straight from a romance novel, would know how to do. Even the title Hustlin’ Texas came to me because I decided a bet over a pool game would be an important part of the book.

The only problem was I’ve never played pool.

Not a big deal, I thought, I’ll research the subject. I mean, that’s what writer’s do, we research topics we don’t know about. Except researching pool was hard. There was a lot of stuff to weed through. There were pool manuals that had the exact rules of straight pool, nine ball, eight ball, and one-pocket. There were also games I’d never heard of like “six hangers” and pool solitaire. There were different rules based on what part of the country you were playing in. There were “handicaps” and home pool hall advantages.

There were scenes where I needed to write out the play by play of a specific pool game. I watched endless videos of champion pool players as they made their way around a blue felted table with a pool stick in their hands. I watched YouTube videos about different trick shots and defense moves. I watched old men who would talk for hours about rhythm and spin, cut-shots and three-rail kicks, long-shots, object-balls and back spin.

I read the book, Running the Table: The Legend of Kid Delicious by Jon Wertheim where he talks about the many different names for money. “Money is "cheese," "bones," "cake," "cabbage," "timber," or "dimes." The In-uit have nineteen different words for snow; the pool world has at least as many for money.”

All in all, I learned more about pool than I ever wanted to know. When I was finally done, I decided that pool was one of the most boring games on the planet. I actually put this line in my book, where the hero, Jett, says this to the heroine, Nikki, near the end of the book.
I had to laugh. I hadn’t expected Jett to feel that way, but by the end he was as sick of pool as I was. I really hope I got all the details right, but if not, know that it wasn’t for my lack of trying. 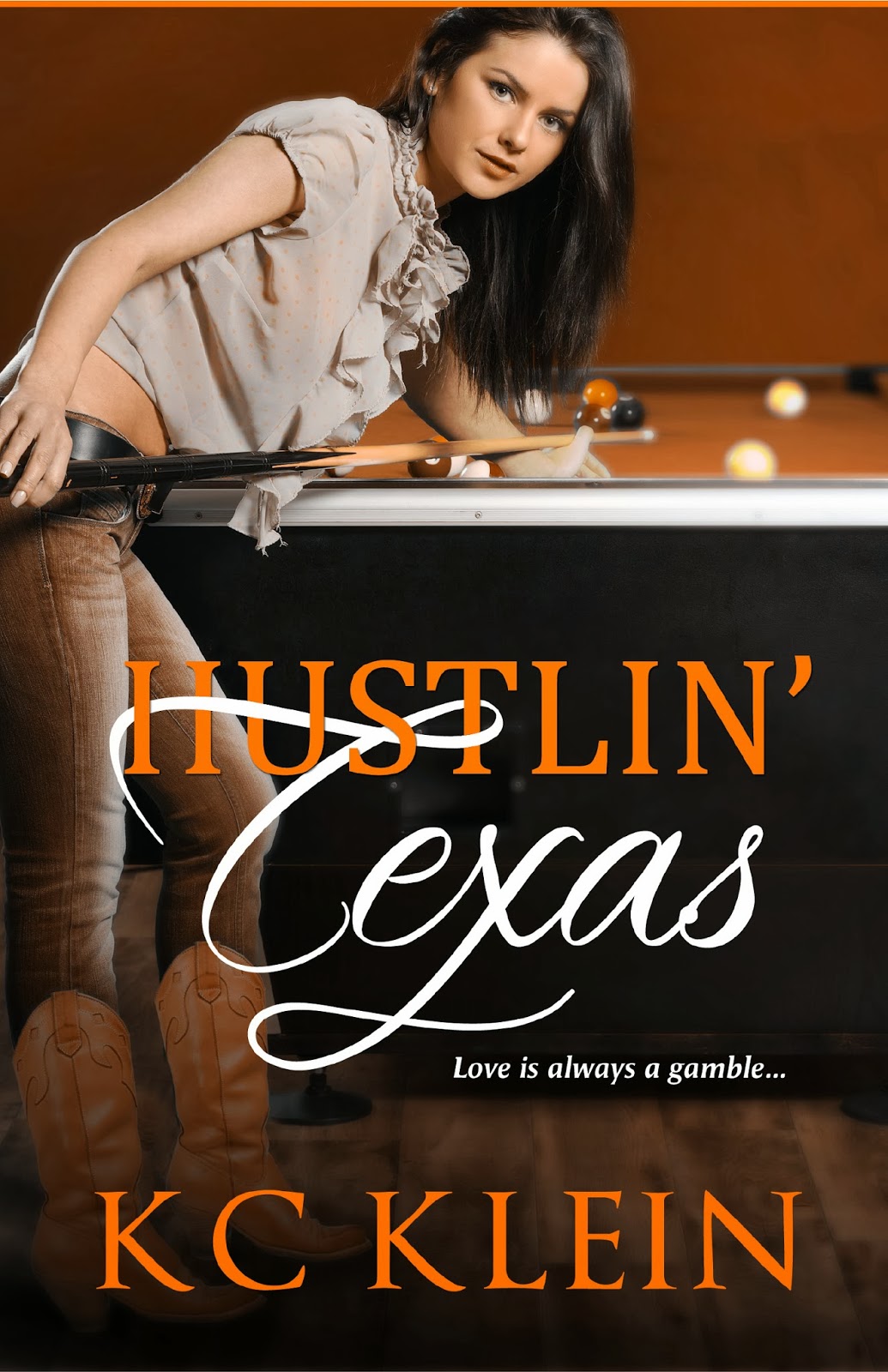 I hope you enjoy reading Hustlin’ Texas, and please let me know what you think about the pool scenes. The one at the end of the book is my favorite.

Giveaway:
KC is giving away an e-copy of Hustlin' Texas to one lucky person leaving a comment or email entry.

BIO:
KC Klein has lived most of her life with her head in the clouds and her nose buried in a book. She did stop reading long enough to make a home with a real life hero, her husband, for over sixteen years. A mother of two children, she spends her time slaying dragons, saving princesses, and championing the belief in the happily-ever-after. Her debut novel, Dark Future, is a finalist in the 2012 Prism contest and has been honored with a reviewer’s choice award. Her other titles include a sci- fi, 2012 RONE award winning romance anthology, Hotter on the Edge, and the first two books in her Texas Fever contemporary romance series, Texas Wide Open, and Hustlin’ Texas. KC loves to hear from readers and can be found desperately pounding away on her laptop in yoga pants and leopard slippers or more conveniently at www.kckleinbooks.com. Sign for her quarterly newsletter for updates on her latest releases, sales, and free giveaways.

“A sexy read. KC Klein’s hero is as hot as a Texan summer’s day. KC is an author to watch..” —Rachel Gibson

Oak Groves’ most beloved bachelor, Jett Avery, lives by a simple set of rules. Getting involved with a complicated woman isn’t one of them. He learned that the hard way two years ago when he spent one of the most incredible nights of his life with Nikki Logan. But then she hightailed it out of town, never to be seen again—until now. It might be time to break one of those rules…

Picking up the pieces of her life, Nikki is back in Oak Groves, face to face with the one man she’s done her best to forget. But she has her reasons for being here—and they don’t include winding up in bed with Jett. Especially since he’ll never forgive her once he finds out the truth about why she’s back…

Excerpt:
Jett knew exactly when Nikki caught sight of him because two things happened. A warm open smile eased her features, transforming her face into the young girl he’d known years back. And his gut tightened as if he’d just been given an invitation—a thought he spit out of his mind like he would gum that had lost its taste.

Nikki strutted down the aisle as if she was walking down a red carpet lined with paparazzi. Dang, she looked like a wet dream. Not his wet dream of course—he appreciated his women a bit more put together and a lot more grown up—but he was sure she’d be gracing someone’s fantasies tonight.

Nikki slid onto the bench opposite his without bothering to ask—like she ever had.

“Hi there,” she said, without a trace of Texas accent. He wondered how long that would last.

“Hi there.” His greeting was edged with a challenge.

And there they sat like they had a dozen times before—like there was no past between them. Like they hadn’t had one night of extremely hot sex, and he hadn’t practically begged her to give them a chance. But now, with her greenish-blue eyes smudged with black eyeliner and the f-you attitude she wore like a superhero’s cape, he had to wonder if she even remembered.

Then her impish eyes softened, and her naked lips slipped into a sexy smile only Nikki could pull off.

Every man had his thing, and if Jett was out drinking with the guys, he’d label himself a “boob man.” Saying he was a “lip man” didn’t quite cut it. But there was something about bare lips, unadorned with color or sticky gloss, ready for kissing, which made him want to nibble.

“Miss me?” Nikki pulled his cup closer to her and added cream and sugar. She took his knife and stirred. He watched his black coffee turn the color of mud.

She made a soft tsking sound. “Ah then, you thought of me often.”

Jett pressed his teeth together, not appreciating how close to the truth she’d come. He caught her eye and made sure she watched as his gaze traveled down her shirt—Christ, she really was wearing a black bra—then back up to her face. “All class, Nik.”

She didn’t blink, just picked up his newspaper and scanned the front page. “Ouch, Rangers lost 21 to 7 in overtime. Hope you didn’t have money on that game.”

He grabbed the paper and quickly found the headline: “Rangers Win in Blow Out,” then threw the paper back on the table, pissed he’d been taken in so easily.

Jett knew that laugh. It was the same laugh that had suckered him into thinking there was more heart to Nikki than she’d let on. He knew better now.

Texas Wide Open is now on sale for $1.99!
Amazon | Barnes and Noble


Giveaway ends 11:59pm EST Jan. 28th. Please supply your email in the post. You may use spaces or full text for security. (ex. jsmith at gmail dot com) If you do not wish to supply your email, or have trouble posting, please email maureen@JustContemporaryRomance.com with a subject title of JCR GIVEAWAY to be entered in the current giveaway.
Posted by Maureen A. Miller at 12:30 AM