Can You Relate To “Perfect Life” Heroes and Heroines?

I recently watched a conversation on Twitter between several authors who were firm in their belief that readers don’t want reality in their romances. They want that hero (these days he tends to be a billionaire who doesn’t actually have to work at keeping those billions) who will sweep the heroine away from all her troubles, solve all her problems. Who doesn’t want that?

Okay, I love the idea of someone coming in and solving all my problems. Sort of. But I’ve read a lot of books where by the end I mutter “yeah, I give them two years tops.” Because I know that putting on that ring or moving in together doesn’t make all the problems magically disappear. It’s often just the beginning.

I married my college sweetheart at eighteen. He was twenty one. Thirty-five years later, we’re still married. I’ll admit the first couple years of our marriage were not smooth sailing. For the first few months, I was resentful about how I’d given up my job with the Canadian government, my apartment in a beautiful college/tourist town of Peterborough which I loved to living in a teeny tiny apartment in Toronto, while my husband kept his name, kept his apartment, kept his dream job with IBM, and given up…nothing. When my son moved in with his girlfriend a couple years back, I told him that the first two years of living together were our hardest—you’re having to adjust to the other person’s habits, to figure out how to keep your own identity while allowing the other person to keep theirs. It’s a tough job sometimes.

Then came the kids and the balance shifted again, and we began another period of figuring our relationship out as we adjusted to being not only Leah and Gizmo Guy but Mom and Dad. Then Gizmo Guy’s job changed and he started having to travel, leaving me to play single parent for weeks on end while he jetted around North America staying in hotel rooms, eating out at restaurants while I ate Kraft macaroni and cheese. He was sightseeing in places like New York City and Boston and Banff (places I’d never been at the time) while I was wiping snotty noses and changing diapers, or as they got older driving them to basketball practice and music lessons before putting them to bed before I could deal with my own job’s “homework” of marking papers and doing lesson plans.

Then there are the in-law issues. Luckily we’ve always been in consensus about putting each other first over family—thank heavens because there were some issues nearly twenty years ago that could have literally torn us apart.

But we hung in there. We’ve found a balance between us, always known and trusted the other would support us no matter what happened. And now the tables are turning. Now I’m the one locking myself in my office to try to meet deadlines. I’m the one leaving him at home (for the most part) while I travel to conferences — though he doesn’t have the snotty noses and stinky diapers to change, he does have to “stoop and scoop” for our Shih Tzu Seamus. ;)

You know it’s true love, lasting love if you can stay together despite all those problems. If being together makes solving the problems easier because you can share the despair and the worry.

Which is why I find it so hard to relate to many of these “perfect life” heroes and heroines.

So when I’m writing a story like my latest, Slow Ride Home, I write heroes I’d want my girlfriends to date. Heroes who I can envision sticking around and supporting that heroine thirty five years later. Heroes who aren’t afraid of sticking their head under the sink and repairing a leaking drain. Or changing out a toilet that’s given up a ghost. Which I definitely can envision after writing one of my favorite lines when Ben Grady, the hero from my latest book Slow Ride Home says about preg testing cows, “Nothing says sexy liking sticking your hand in a plastic bag up the ass end of a cow.”

Yeah, not sexy. Realistic, and it may turn off some readers who don’t want reality intruding on their fantasy. But I can’t write any other way. I definitely can see Ben dealing with a plugged toilet when his and Allie’s son flushes his favorite Batmobile down the toilet when he’s three. I can see him taking the kids out riding, or to the fair on those days Allie’s stuck in the office doing her “lawyerly stuff” as Ben calls it. The same way Allie will support him. I can see them making it through those tough times, supporting each other, when the in-laws cause problems, or their kid is facing surgery and they’re terrified. That they won’t forget to make time for quiet moments together, or find ways to make the other laugh. Hmm, I’ve always heard advice saying “write what you know.” I guess that’s what I’ve been doing. Because that’s how my husband and I have managed to last this long.

The only woman in a houseful of men (even the cat and dog are male), Leah Braemel loves hiding away from all the dust bunnies while she writes sexy heroes and heroines finding true love. To read more about Slow Ride Home or any of Leah’s other books, you can visit her website, follow her on Twitter, or on Facebook. 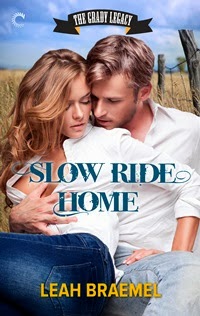 Allie thought she’d moved beyond the scandal that cost her Ben in the past. But working so closely with the seductive rancher arouses the wild child within the cautious woman she’s become. Though she tries to keep business and pleasure separate, Allie soon gives in to temptation, and discovers Ben’s sensual skills surpass even her X-rated memories…

Allie has every intention of leaving Bull’s Hollow forever after her investigation is complete. But there are a few complications. Not the least of which is that while saving the ranch, Allie’s lost her heart.

Want to read an excerpt of Slow Ride Home?