With Shirley Jump and Jackie Braun

Congratulations to "Ada", the winner of Shirley and Jackie's giveaway. Thank you to all who participated!

It's said that gentlemen prefer blondes, but what do women prefer? Mega-rich men or down-to-earth guys? Romance writers Jackie Braun and Shirley Jump offer up some scrumptious reasons for readers to consider which would make a better mate.

Jackie:
I’ve written about plenty of rich heroes during my career as a romance author. There’s something to be said for sharp-dressed men who have the resources to whisk a woman off to an exotic locale or treat her to the kind of luxury most of us can only dream about. 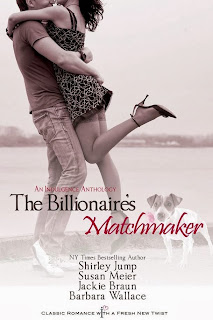 But I have a confession to make. The heroes I enjoy writing about the most are regular guys like Gideon Roth in Love Unleashed, the third story in The Billionaire’s Matchmaker, an Indulgence anthology from Entangled Publishing that releases Oct. 14. These heroes may be well-established in their careers (Gid is a veterinarian who owns a thriving clinic and has just been offered his dream job…on the West Coast), but they aren’t what you would call well-to-do.
Don’t get me wrong, they are articulate and educated, but if they speak a second language, it’s most likely “car”—as in they know every make and model of muscle automobile.

As for their own vehicle, it’s a recent model, but no chauffeurs for them. They prefer to be behind the wheel, and if the car has a manual transmission, so much the better.

They live in a nice house rather than in a mansion on an estate. Or they might live in a classy apartment, but it’s not the penthouse.

They are down-to-earth guys who prefer a cold beer to a pricey glass of cognac and have more use for a pair of well-worn Levi’s than a designer suit.

These guys spend their Sundays watching football, and they can handle basic home repair. And they work out. They may not belong to a fancy gym, but they have free weights in their home and can bench press a few hundred pounds…and they look incredibly hot doing it.

My favorite kind of hero may not own coasters, much less use them, but he isn’t helpless around the house. He knows how to fend for himself. He can cook a decent pot of chili and whip up spaghetti as long as the sauce comes from a jar. And he’s mastered the art of loading a dishwasher and running a washing machine, even if his whites aren’t always the whitest.

Family is important to this hero. So is friendship, whether it’s with the guys he meets for poker once a month or the heroine who finally snags his heart. (In my story, Gid and Mia aren’t just hot for each other, they also are friends, something it takes my distrustful heroine a little while to figure out.)

Sometimes this sort of hero takes the scenic route before falling hard, but once he arrives at his destination, he sinks down roots that last a lifetime.

So, yeah, wealthy heroes are fun to write, but regular guys--guys like Mia's-- have a charm all their own.
***
Shirley:
I have to agree with Jackie on a couple points—I like ordinary heroes who can fix a broken faucet as easily as they can make a simple steak dinner. Most of my heroes are like that—they’re regular guys underneath it all. My hero, T.J., in Driving Mr. Right Home, the first book in The Billionaire’s Matchmaker, is a wealthy guy who is tired of people seeing only his bank account and not his true self.

He returns to Chandler’s Cove, looking for the one woman who knew him before he became wealthy—Gabby. He tells a little (okay, big) white lie so he can spend time with her on her cross-country road trip, and have a chance to see if there’s still a spark between them before he reveals his true identity.

So I guess if you ask me, my favorite hero is an ordinary guy with an extraordinary bank account. I mean, it’s nice to have a guy who can afford to jet you off to Paris for dinner, or take you to the shoe store and buy you every last pair. It’s nice not to have to worry about the cost of the groceries or the ribeyes price per pound versus the sirloins. I figure I spend enough time in Comparison Shopping Land that it’s fun to create a hero who can afford anything yet still has that grounded sexiness that women love.

If my heroes are speaking “car”, it’s often the language of Benz and Bentley. If they’re talking spaghetti, it’s in a cozy restaurant in Italy. If they want to see the football game, they fly the heroine to the stadium and enjoy the coziness of box seats. Or not—my perfect hero is as at home in a Toyota as a Benz, and doesn’t care if he eats lunch outside in the January cold instead of in a five-star restaurant. That’s what made T.J. so much fun to create—he could afford the best of everything but chose to stay in a seedy motel and eat fast food because all he really wanted was to be with Gabby. To me, that’s the mark of a true hero—a man who will do whatever it takes to spend time with the woman he loves.

And if he happens to be showering her with diamonds or taking her across the country in a Lear jet, hey, I’m not going to complain!


When a handsome man from Gabby’s past agrees to a cross-country road trip, her master plan to re-launch her art career quickly morphs into an unexpected, romantic reunion.

Giveaway:
Jackie and Shirley will be giving away a digital copy of The Billionaire's Matchmaker to one person leaving a comment.

Giveaway ends 11:59pm EST Oct. 12th. Please supply your email in the post. You may use spaces or full text for security. (ex. jsmith at gmail dot com) If you do not wish to supply your email, or have trouble posting, please email maureen@JustContemporaryRomance.com with a subject title of JCR GIVEAWAY to be entered in the current giveaway.
Posted by Maureen A. Miller at 12:30 AM