With: Barbara Wallace and Susan Meier

Congratulations to "Karen J." the winner of Barbara and Susan's giveaway. Thank you to all who participated.
Susan:
It’s been a while since I wrote a guy who was just plain sexy. Normally, I write the sleek, sophisticated rich hero or the wonderful beta … who though he might not know it at the beginning of my book actually longs to be a dad. They’re fun. They’ve loved. But…just once I wanted to write somebody totally sexy.

Why? The eyes. Let’s face it. There’s something about the way a guy looks at you when he wants you. Just reading that line, your bones probably melted a bit, didn’t they?  Dell O’Neil, my sexy sheriff, in THE SHERIFF’S SECRET, story 2 in THE BILLIONAIRE’S MATCHMAKER, has a way of looking at a woman that just makes her want to swoon.

Then there’s the body. I like a man who isn’t afraid to take off his shirt because he’s got such a great chest and abs he doesn’t think twice about showing it off. Not that he’s vain. Quite the contrary. All those muscles are a natural result of who he is, what he does. Dell is the town sheriff and it wouldn’t do for him to be skinny or weak. He likes that he’s buff. Not necessarily scary, but intimidating…which makes him yum-a-licious to the ladies in town. He barely notices that he’s sexy. It’s just who he is.

Which means attitude is a big part of sexy. No vanity allowed. No wimps allowed. We want a guy, who, when the chips are down, knows how to win a fight. He stands up for what he believes in because having convictions is a very sexy thing too. So is wanting his woman. Not every woman. His woman. So is pushing her to the edge every once in a while, making her realize she’s his equal in every way.

That’s why I think sexy wins over sweet, or savvy or suave or even smooth!

Barbara:
No offense to Susan, but while sexy is awesome, sweet is the meat of the relationship.  Don’t get me wrong; I love rock-hard abs as much as the next woman.  But what happens after the swooning is over?

I guess that’s why I’ve never dug those super Alpha heroes.  You know, those guys who have to be broken before they can be loved.  For me, a real hero is a man who has substance beneath his rock hard muscles. Sweet guys double check the tire pressure on the heroine’s car or who gives the heroine a hug when she reveals her tragic past.   Or, in the case of Nicholas Bonaparte, my hero in the Billionaire’s Matchmaker, a man who is willing to traipse through the woods looking for a lost King Charles Spaniel.

Does sweet mean the hero’s a wimp?  Not on your life.  Sweet heroes are simply considerate. They are as interested in a woman’s mind as they are her body.  And they are looking for a connection deeper than sex.  In Nicholas’ case, he’s been broken – beyond broken actually – and his experiences have led him to appreciate true connection.

In other words, sweet is sexy!  The rock hard abs are simply a nice bonus. 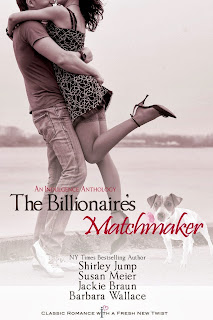 When a handsome man from Gabby’s past agrees to a cross-country road trip, her master plan to re-launch her art career quickly morphs into an unexpected, romantic reunion.

Giveaway:
Barbara and Susan will be giving away a digital copy of The Billionaire's Matchmaker to one person leaving a comment.

Giveaway ends 11:59pm EST Oct. 13th. Please supply your email in the post. You may use spaces or full text for security. (ex. jsmith at gmail dot com) If you do not wish to supply your email, or have trouble posting, please email maureen@JustContemporaryRomance.com with a subject title of JCR GIVEAWAY to be entered in the current giveaway.
Posted by Maureen A. Miller at 12:30 AM