One of the things I love about the approach of Christmas is writing a romance with a winter setting, and I’m extra excited this year because although I’ve written 65 books for Harlequin Presents and Medical Romance, Sleigh Bells in the Snow is my first full length contemporary romance. 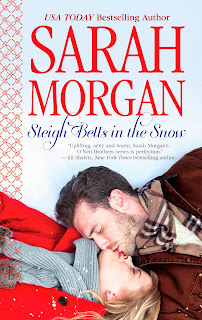 One of the things that contemporary romance often explores so well is family dynamics and when I started writing Sleigh Bells I knew that the book would revolve around a large, loving, complicated family. I have sons and I’ve always been fascinated by their relationship so when I started planning a series it made sense that my three heroes would be brothers.

The O’Neil family has owned and run the Snow Crystal Resort and Spa in Vermont for four generations. Brothers Jackson, Sean and Tyler O’Neil all left home to follow their own paths, but now the business is in trouble and it’s up to strong, sexy Jackson to try and save it. To do that he employs Kayla Green, a public relations expert. Kayla is an expert at her job, but she’s out of her depth with Jackson and the O’Neil family. She arrives at Snow Crystal hoping to escape the madness of the holiday season but finds herself neck deep in snow and festivities!

I loved exploring Jackson and Kayla’s romance, but also the relationship between the different family members. The O’Neils love Christmas and like many families they have plenty of their own traditions.

My family has traditions too, and one of the favorites is choosing the tree. Early in December we make the trip to the forest where they transform a clearing into a winter wonderland complete with a blazing log fire, roasting chestnuts and mistletoe heaped high for those in need of a romantic stimulant. It doesn’t matter what mood I’m in when I arrive, I always leave feeling uplifted because there’s a sense of expectation in choosing a tree even though you know that once you get it home it’s going to drop needles, stab people and generally give you a thousand reasons not to love it.

What about you? Do you have a favorite Christmas tradition?

FROM THE BACK COVER

Once upon a time, Christmas was Kayla Green's favorite time of year. Now all the workaholic wants for Christmas is for it to be over—as fast as possible! So when duty calls her to snowy Vermont to close a deal with a new client, Kayla is grateful for an excuse to avoid the holidays for another year.

Jackson O'Neil left a thriving business behind to return home and salvage his family's resort—it's in his blood, and he can't let it fail. Now that he's got marketing whiz Kayla Green working with him to put Snow Crystal on the map, success is on the horizon. The fact they strike enough sparks off each other to power all the Christmas lights in Vermont is just an added bonus.

Kayla might be an expert at her job, but she's out of her depth with Jackson—he makes her crave the happy-ever-after she once dreamed of, and it's terrifying. As the snowflakes continue to swirl, will the woman who doesn't believe in the magic of Christmas finally fall under its spell?

USA Today bestselling author Sarah Morgan writes hot, happy contemporary romance and her trademark humour and sensuality have gained her fans across the globe. Described as ‘a magician with words’ by RT Book Reviews, she has been nominated three years in succession for the prestigious RITA© Award from the Romance Writers of America and won the award twice; in 2012 for her book ‘Doukakis’s Apprentice’ and 2013 for ‘A Night of No Return’. She also won the RT Reviewers’ Choice Award in 2012 and has made numerous appearances in their ‘Top Pick’ slot.

Sarah lives near London with her husband and children, and when she isn’t reading or writing she loves being outdoors, preferably on vacation so she can forget the house needs tidying.  You can visit Sarah online at www.sarahmorgan.com, on Facebook at www.facebook.com/AuthorSarahMorgan and on Twitter @SarahMorgan_