Congratulations to "Sophia" and "Karen J", the winners of Misty's giveaway. Thank you to all who participated!

Most people who grow up in small towns dream of leaving them for the excitement and glamor of the big city. When she was a teenager, part of Misty Matthews felt the same way. She desperately wanted to leave her hometown, and find love and adventure somewhere else. It wasn’t that there was anything wrong with her hometown, and she loved her family, but she craved something more.

She got her chance to escape the confines of her birth place when she moved away from home to go to school. She went to Ottawa, Canada’s national capital, and attended Carleton University. What a wonderful adventure that was. She earned her degree in English and history, but more importantly, she met the love of her life. She and her husband have been married 42 years and have three children and five grandchildren. Their adventure isn’t over yet. 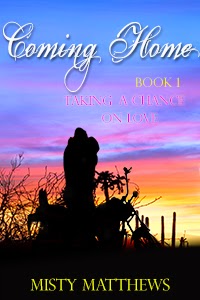 In Coming Home, the first book in the Taking a Chance on Love series, written by Misty Matthews, as a teenager Alana’s hopes and dreams were similar. Growing up in Chance, Arizona, a small town where everyone seemed to know everyone else’s business, and where she felt as if she didn’t fit in, she couldn’t wait to escape from the narrow confines of small town America. Like part of Misty, she left home to go to school in Austin, Texas and was determined to stay there. Now, a high-powered attorney, she’s on the fast track to promotion. Although there isn’t love in her life, she’s proud of the career and lifestyle she’s created for herself. There isn’t anything she’d rather do in her spare time than ride her motorcycle or read a good book, especially on written by J.T. Connor. The last thing she wants to do is go back to Chance, even for a visit, but family obligations have a habit of forcing you to do the things you’d rather not.
Never say never!

Connor, like the other part of Misty, on the other hand, never aspired to leave his home town, but he did. He moved to New York City for school, and then to Los Angeles to work for a publishing house. Unlike Alana, he hated the big city and when the opportunity presented himself to move back to Chance, he jumped at it. There’s nothing he likes better than riding his motorcycle into the desert and helping out with the Chance Volunteer Fire Department. His secret career as an author gives him the financial freedom to visit anywhere he likes, but Chance always draws him back. The only thing missing in his life is love.

Time has a habit of changing your perspective. Like Alana, part of Misty swore she’d never return to Cornwall, and then ten years later, she did just that. Small cities have a charm of their own. Although Cornwall is considerably larger than the imaginary town of Chance, it’s located near enough to the big cities around it to provide some excitement. When Alana returns to Chance, some things are the same, but through the lens of time, she realizes that things may not have been exactly the way she remembers them. The other part of Misty grew up in the big city and still dreams of returning home, yet she’s made a good life for herself in a distant part of the country where she too had found love. Sometimes we don’t realize that where we are is exactly where we’re meant to be.

About Coming Home:
Motorcycle riding, high-powered attorney Alana Stewart is a far cry from the shy, teenager who left Chance determined never to look back. Family obligations force her to return to the town that only holds bad memories for her. A stop at her former sanctuary brings an unexpected surprise...the new manager just might be what she needs to get her through the holidays.

When sexy, leather-clad Alana walks into the bookstore, Connor Tate, has a feeling he may be in for the ride of his life. Despite the fact that their lives are headed in different directions, they are drawn to one another. Connor is determined to prove to Alana that Chance isn’t the place she remembers, but will his efforts fail when she discovers he hasn’t told her the whole truth about himself?

Can they trust each other enough to take a chance on love?

Excerpt from Coming Home:
He seemed vaguely familiar, and Alana rattled her brain trying to place him, but try as she might, she couldn’t imagine anyone she knew back then looking like this today. Had she seen this god before, she’d certainly have remembered him.

“Can I help you?” He looked at her boldly, his gaze taking in every inch of her. The look on his face said he liked what he saw.

“I was looking for Mr. Tate. Is he around?” She was amazed that her voice sounded so normal when her heart was beating so fast he must surely be able to hear it.

“I’m sorry. My dad isn’t here right now. Is there something I can do for you?”

Lots! Her brain screamed as her raging hormones threatened to take over and destroy what little common sense she had left. She peered at him more closely, trying to zone in on that familiarity she’d detected. Of course! She remembered him—sort of. Mr. Tate had had two children, but they were both older than she was. Although they’d gone to the same school, the age gap between them had put him a couple of grades ahead of her, making him a senior when she was only a sophomore.

If memory served, his name was Connor, but he couldn’t possibly have looked this yummy back then —not that she would have noticed. With her low self-esteem and poor self-image, she’d walked through her teen years with her nose firmly planted in whatever book had captured her attention. Back then a guy like him would never have given her a second glance.

About Misty Matthews
Misty Matthews is a co-writing team consisting of Susanne Matthews and Misty Cail who actually live 1200 miles apart and have never met!

To learn more about them, visit: http://www.mhsusannematthews.ca/misty-matthews.php
Like them at: https://www.facebook.com/misty.matthews.733

Giveaway:
Misty will be giving away 2 digital copies of COMING HOME to 2 people leaving a comment or email entry.

Giveaway ends 11:59pm EST Oct 25th. Please supply your email in the post. You may use spaces or full text for security. (ex. jsmith at gmail dot com) If you do not wish to supply your email, or have trouble posting, please email maureen@JustContemporaryRomance.com with a subject title of JCR GIVEAWAY to be entered in the current giveaway.
Posted by Maureen A. Miller at 12:30 AM