Breast Cancer and Happily Ever Afters

Congratulations to "Bn100", the winner of Abigail's giveaway. Thank you to all who participated!

I found my lump in February of 2006.  I was 33.
Crazy, right?  No family history of breast cancer, no other obvious risk factors.  And yet, there it was, the hard knot under my breast that pulled up my skin and made it flat.  The diagnosis came the next month, and a mastectomy, chemotherapy, radiation, and reconstruction followed.

I started writing WhoWants to Marry a Cowboy? in March.  At first, I thought the timing was coincidence.  But now, looking back, is there a better way to go through this kind of special hell than with a happily ever after by your side?
Tess Mitchell is a secondary character that underwent breast cancer treatments before Who Wants to Marry a Cowboy? begins.
Ainsley sped to Charleston Blooms like an insect escaping a Venus flytrap and barely managed to keep herself from slamming the door to her shop when she finally made it inside. Tess Mitchell stood behind the Formica counter and jerked her head up at the noise. Ainsley took a deep breath, but even the normally comforting floral scents did nothing to calm her.
“Tea went as expected, then?” Tess asked wryly. Ainsley glared at the store manager, watching her short, brown hair catching rays of sunshine and turning it auburn. It had grown back steadily since her chemotherapy ended, and Ainsley was glad her friend was on her way to becoming healthy again.
I didn’t cover my head while undergoing treatment, thanks to a matter-of-fact comment by a coworker that no one at work would care if I was bald. She was totally right, and when my hair started growing in, everyone made the same comment to me:  Wow, your hair got so long!
I’ll let you in on a secret.  A big part of giving Tess cancer was so Ainsley, my heroine, could tell Tess how much her hair had grown when she came back from the ranch in Wyoming.
Ainsley bounded out of the office and wrapped Tess in a chokehold hug before she took a step back. “Your hair! It’s grown so much!” She touched her store manager’s head, rubbing the coarse, spiky hairs against her fingers.
“I know! I kind of like it this way.” Tess turned in a circle slowly so Ainsley could get the full benefit of her new look. “I’ve even had to start using product in it because it’s starting to get a mind of its own, getting all poufy.”
I’m not alone in having breast cancer, nor turning to romance novels during that time.  For the past two years, I’ve talked to romance authors about breast cancer on the USA Today Happily Ever After blog.  And when I realized that my blog here was in October, I knew there were more stories to tell.
Joya Fields writes thrilling, sexy, and sometimes dangerous romance with attitude, and got her diagnosis last year.  “When I was diagnosed, I decided distraction would be my way of handling things. I followed my doctors’ recommendations for treatments, but other than that, I escaped my ordinary world by writing more than usual and reading every romance book in sight. Through my writing, thanks to my characters and stories, I immersed myself in another life. Instead

of worrying about chemo ports and blood counts, I pounded out words on my computer and temporarily lived in a haunted Baltimore apartment building, or caught bad guys and brought them to justice.

I reread a favorite book, too: SANCTUARY by NoraRoberts. I love a good romantic suspense - what better way to assure ourselves that, no matter the odds, no matter the tough times, we can fight hard and win? It’s really fun to experience the happily-ever-after endings, too.”

I was diagnosed with invasive breast cancer that had already spread. The doctors think I had it eight to ten years, and I was only 43 at the time. Miraculously, it hadn't entered the lymph nodes, and after undergoing bilateral mastectomies, I survived. The next couple of years were filled with depression, anxiety, and self-image crises that come in the wake of such an ordeal - especially, at such a young age and with three elementary and middle school age kids to raise.
During this difficult time, I began to read only romance novels. In the past, I had read many other types of fiction and non-fiction, but I needed the comfort of a happily ever after ending.  I couldn't deal with anything else.
At the same time, I embarked on my own career as a romance novelist.  Writing and reading romance is what got me through my journey and battle with breast cancer. Without cancer, I'm not sure I would have ever taken that step. Cancer is what pushed me to finally follow my dream to become a romance novelist.
I'm not published yet, but I know I will be. Living through cancer, battling it and fighting it every step of the way, refusing to let the aftermath ruin my future – it’s all given me the courage and the determination to fight tooth and nail to achieve my dream, and I will never give up.
The pictures are about a year after the mastectomies when I was feeling pretty low. They serve two purposes - to remind me that I am still a beautiful person and a whole woman, even without my real breasts, and to never stop fighting, never give up on my dream.”
Right on, Shelly.  Write on, too.  She also added this:  If we can save just one life by creating more awareness, if we can help just one person who is going through depression or a self-image crises because of having their body cut up, then it's all worth it.
Damn straight, sister! 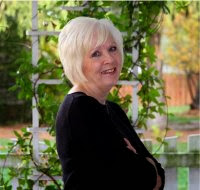 Becky Lower writes timeless romance with sass. Cancer had always been part of her life, but it doesn’t mean there’s no happily ever after!  “Cancer has always been a subject in our family--kind of like the relative you don't like but can't ask to leave. My mother was diagnosed when she was only in her 40s, and it was back in the day when chemo and radiation were really barbaric. It destroyed her ability to raise her arm. Since living through her experience, I have always been aware of the necessary steps to take to stay on top of things. I'd taken a precaution several years earlier and had a breast reduction because the technicians were having trouble fitting my entire breast onto the mammo machine. 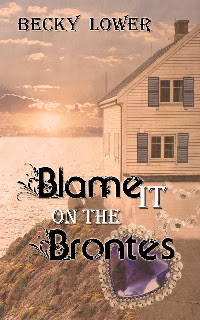 At age 62, unemployment forced me to move to a strange town, where I knew only my sister and had no insurance.  A month later, I went in for my annual mammogram. A small spot was detected, very near the chest wall, which would probably not have been seen before my reduction surgery. It was stage zero, but the first surgery--a lumpectomy--didn't completely remove it.  Medical costs were rising, and I had to apply for financial aid to cover a second surgery.  The doctor said I wouldn't need chemo since the cancer hadn't traveled into my lymph nodes, but I should have radiation to make certain it had all been removed, especially since they were having trouble locating it. Because of my mother's experience, and because of the money thing, I elected for the other option--total breast removal.
Everyone handles cancer in a different way, and my way was to ignore it. I didn't write about it, talk about it, anything. What I did do was dive into books. I had begun to write romances, and that's the type of book I devoured. I was in the middle of Nora Robert's Boonsboro trilogy when the diagnosis was received. I was familiar with the town where the books took place, so instead of being in Ohio recovering from a breast removal, I slipped into the streets of Boonsboro, MD, ate at the pizza shop, toured the rooms of the historic inn that Nora renovated, spent hours in her little bookstore--anything to avoid reality. It got me through at a time when I really needed to be in an alternate universe.
Four different women, four different ways of handling the diagnosis, four different ways of dealing with the treatment, but one thing in common:  The happily ever afters in romance novels helped us all tell the next chapter of our stories.
What’s your story?

Giveaway:
I will be giving away a Grand Central Publishing CD that includes five full-length novels (including Who Wants to Marry A Cowboy?) and sneak peeks of others.

Abigail is a Boston-bred Yankee now eating grits and saying "y'all" in North Central Florida. She was diagnosed with stage 2 breast cancer in 2006 but is now six years cancer free.  She previously talked about romance novels and breast cancer on the USA Today Happily Ever After blog, which can be read here, and here. Abigail lives with her husband, two kids, and one crazy princess puppy. You can keep up with her on Goodreads or on Facebook at www.Facebook.com/AbigailSharpeBooks.

Giveaway ends 11:59pm EST Oct. 28th. Please supply your email in the post. You may use spaces or full text for security. (ex. jsmith at gmail dot com) If you do not wish to supply your email, or have trouble posting, please email maureen@JustContemporaryRomance.com with a subject title of JCR GIVEAWAY to be entered in the current giveaway.
Posted by Maureen A. Miller at 12:30 AM