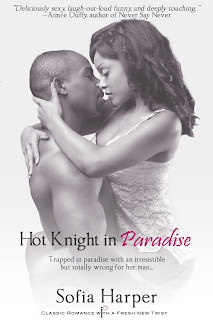 The premise of HOT KNIGHT IN PARADISE is that the heroine, Leah, gets stranded in a foreign country ala “French Kiss,” except technology has come so much further. I can't remember the last time I've seen a pay phone. I could have saved myself some trouble if I wrote a dystopian romance novel or even a historical romance. And that's the tough sell for most contemporaries. You've got to find a logical and plausible way to torture your characters because your audience lives in the world you've created. So, I had to come up with a solution.

I cheated. I totally cheated and I don't feel bad about it one bit. And by cheat I mean I dropped the characters into a very isolating locale. Technically, they're in the middle of a jungle. If you've ever lived in a small town you know how all the Big Retailers might be eons away. The thing is, these two people needed each other. They needed to be isolated themselves, for the most part. If given the chance to avoid a deep connection, they'd run.

And that's why contemporaries are special. There are a dozen things in the modern world that actively stands in the way of a real life HEA. There are no werewolves that's intent to kill you. Despite many Facebook statuses that says otherwise, the world isn't going to end if you don't share/like whatever. No, you have to wade through the ordinary to experience the extraordinary. Those are small moments of a shared understanding, a conversation in the middle of a night, holding hands and doing more than holding hands.

So, I may have cheated, but the romance is definitely contemporary.

Bio:
Sofia Harper started writing contemporary romance a long, long time ago. When Sofia's not spending time with imaginary people in her head, she's corrupting two little trouble makers. Currently she lives in California where the wine is good. She also going full-throttle on the ride called publishing. These two thoughts are not related.

Blurb:
Stranded in paradise with no way to get home, Leah Smith needs a miracle, and fast. Instead, she gets Marshall Jackson, surely the sexiest man alive. Too bad he's got an emotional wall around himself--and her only hope of getting off the island ... Marshall has a strict no damsels in distress policy, but there's something about Leah that makes him want to break his own rules. He agrees to let her work in his bar until she earns enough to get home. But the more time they spend together, the harder it is to deny the scorching attraction between them. Soon hot island nights provide balm to their wounded souls, but will these two flawed exiles make peace with the past in time to claim the future they deserve together--or will paradise be lost?

Excerpt:
He grasped her waist. “But a proper kiss is about the anticipation.” His hand continued the journey slowly up to her face. “Both parties must be aware of the possibility and wait for the right moment to happen.”

“Telling me to come here so you can kiss me means you created the right moment. And the anticipation doesn't make it better.”

“Still counts. You don’t know when I’m going to make my move.” He paused, voice lowered.
“You should also know I will make you regret those words.”

Well, damn if he wasn’t right. Once he’d spoken her heart had kicked up. Her pulse thumped against the hand now on the side of her neck. Marshall’s gaze went to her lips as he ran a thumb over the parted flesh. She trembled.

The comment made her lick her lips, which was probably the reason he said it, if the smirk was any indication. He lowered his head, placed a whisper of a kiss on her bottom lip, then a little bit of pressure. He moved back, but only a breath away.

He kissed her the same way again and again until he introduced her to his tongue in slow swipes along her top lip. He would pull back far and long enough that she didn’t think he was coming back. Just when she thought he was done, he’d nip at the sensitive flesh of her mouth. Marshall continued the torture until he had his hands gripped in her hair and there was no pulling back.