Setting, and the DEAL OF A LIFETIME

Congratulations to "Angela I.", the winner of Rue's giveaway. Thank you to all who participated! 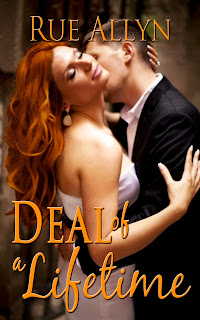 Before the action of Deal of a Lifetime begins, Connor (our hero) is based in Chicago IL and Tamsin has moved away to Phoenix AZ. Emotionally the two are as distant from each other as they are physically. As the story opens they’ve both come to Montana to negotiate contracts with a supplier for their respective distribution businesses. Neither one belongs in Montana but whether they return to their separate lives or once again join forces is the point on which the plot turns. I won’t spoil the fun by telling you who travels farthest or yields the most. I will tell you that I had tremendous fun with this story. I took two flat-landers (Chicago and Phoenix are both relatively flat) into the mountains, both physical and metaphorical, where they were forced to confront their deepest desires and negotiate with each other to gain that Deal of a Lifetime.

Giveaway:
Please leave me a comment and tell me what kinds of deals you’ve made and where you’ve been when you negotiated. Everyone who comments will be entered into a drawing for a free download of Deal of a Lifetime.

DEAL OF A LIFETIME

He proposed a merger...she wanted marriage.

Wanting more than bedroom and boardroom negotiations, Tamsin Donal left her lover and business partner Connor O'Neal. She buried painful memories, rebuilt her life, and began a successful career. Seven years later, a chance encounter with Connor reveals those old feelings haven't changed. But her love wasn't enough before. She'd needed his. Now she has secrets that can destroy a future with the one man she never stopped loving.

Connor never failed to close a deal...until the only women he ever loved turned down his proposal. Fate has just given him a second chance. Negotiations will be heated and so will the passion. With single-minded determination, he's going to prove his love and show Tamsin they could have the Deal of a Lifetime.

Deal of a Lifetime will be available worldwide on September 4, 2013. Currently you may purchase the book through Amazon’s Kindle Store.

Learn more about Deal of a Lifetime, Rue Allyn and her other books at http://RueAllyn.com. You may contact Rue through the following social media sites.


Giveaway ends 11:59pm EST Sep. 4th. Please supply your email in the post. You may use spaces or full text for security. (ex. jsmith at gmail dot com) If you do not wish to supply your email, or have trouble posting, please email maureen@JustRomanticSuspense.com with a subject title of JRS GIVEAWAY to be entered in the current giveaway.
Posted by Maureen A. Miller at 12:30 AM