How To Tame A Wild Fireman

Congratulations to "Jen Z." the winner of Jennifer's giveaway. Thank you to all who participated! 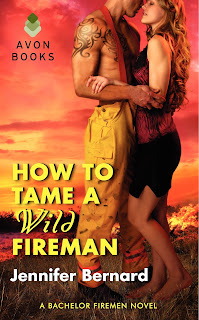 Thank you so much for having me here on this wonderful new blog for fans of contemporary romance. As I was wrapping up my latest book, something happened that reminded me of why writing contemporary is so exciting – and so challenging. The book, HOW TO TAME A WILD FIREMAN, is set partially at a massive wildfire. My hero, Patrick Callahan, AKA Psycho, is a heli-rappeller, someone who rappels out of helicopters behind the fire lines. It’s incredibly dangerous, but he has the personality and skills for the job. In fact, he’s considering joining a “hotshot crew.”

One day after I sent off my final galleys to the publisher, 19 members of the Granite Mountain Hotshots, based out of Prescott, Arizona, were killed in a wildfire. You most likely saw it on the news, since it was one of the biggest tragedies ever to strike a wildland firefighting crew. The news sent shockwaves through the entire firefighting community. Since I began to publish my Bachelor Firemen series, I’ve become quite connected to that community, and I felt much the same grief and horror the nation’s firefighters did. I wanted to do something, anything, to show my support, in addition to donating.

I immediately emailed my editor to ask if I could add something to the dedication, but it was too late. We were already at the final typesetting phase, and she couldn’t change the schedule. If timing had been just a little bit different, I could have included a reference within the book. Something to show that I honored those 19 brave firefighters. Sadly, it didn’t work out that way.

But that’s also the beauty of writing contemporary stories that are set in the here and now. The world is changing as we write. We’re not inventing future worlds, or recreating past worlds. We can’t anticipate the events that might affect our stories. We’re working with the ever-changing, fascinating, complex world around us at this very moment. That’s part of what makes contemporary romance so exciting.

Of course, we’re presenting our own personal version of the “real world.” My version includes plenty of humor and happy endings. It features daring, adrenaline-junkie firemen who learn how to settle down, gutsy heroines who bring said firemen to their knees, and the occasional rescued llama.

There’s another benefit to dealing with current events. We can help. For every comment on this post, I will personally donate $1 to the Prescott Firefighter’s Charities, which is coordinating efforts to help the families of the fallen hotshots. So if you comment, not only will you be in the running for a copy of the first book in the Bachelor Firemen series, THE FIREMAN WHO LOVED ME, but you’ll be doing something to help a tragic situation.

Thank you for your support, and thank you to Just Contemporary Romance for having me here today!

How To Tame A Wild Fireman

The Bachelor Firemen of San Gabriel have a rebel among them, and there's only one woman who can put his flames out.

Firefighter Patrick “Psycho” Callahan earns his nickname every day. Fast, fit, and a furious worker, he thrives on the danger which helps him forget a near-tragedy that changed his life forever. But when his off-duty carousing gets out of hand, Patrick is sent back to Loveless, Nevada, where the wildfire threatening his hometown has nothing on sizzling Dr. Lara Nelson.

Lara would rather be thought of as the physician who returned to Loveless than as the misfit brought up at a hippie New Age commune. But right now she’s focused on her job at hand, patching up injured firemen...until the past hits her in the hard-muscled, blue-eyed form of Patrick Callahan. Now, the embers of their decade-old attraction have ignited into a full-on inferno, as the bad-boy firefighter and the good doctor take a walk on the wild side they'll never forget.

Excerpt:
The monstrous creature was closing in on them. Now she could see that of course it wasn’t one very bizarre being, but a firefighter carrying some sort of animal on his shoulders. Another firefighter strode next to him, carrying a gas can and some other gear. He pointed at the medical tent and the group veered toward Lara.
Now she saw blood all over the firefighter’s front. Although she couldn’t see his face, which was partially blocked by the animal, his body was breathtaking. His T-shirt was so drenched with sweat it showed every ripple of muscle in his powerful torso. He was about six feet tall, intensely powerful, with broad shoulders strong enough to carry a … whatever that was.
“Where’s Donnell?” the second fireman asked her, in an Australian accent.
“He left me in charge. What is that?”
“Injured animal stranded by the wildfire.”
The fireman came to a stop, bent down and set the creature on the ground. It staggered, nearly collapsing. Its frightened golden eyes flicked from one face to another, as if looking for its mother. Lara knelt next to it and gently reached for its injured leg, but it kicked feebly at her.
“Cheeky, isn’t she?” said the Australian.
Out of the corner of her eye she saw the fireman straighten up and put his hands to his lower back.
“She’s a llama,” he said in a smoke-roughened voice. “I’m calling her Goldie Hawn. Anyone else notice the resemblance? It’s the fluffy hair.”
Lara sat back on her heels, nearly tumbling over backward. She stabilized herself and glanced sharply up at the fireman. Intense blue eyes, the color of the deepest part of a flame, met hers.
“Patrick?”

For every comment on this post, I will personally donate $1 to the Prescott Firefighter’s Charities, which is coordinating efforts to help the families of the fallen hotshots. So if you comment, not only will you be in the running for a copy of the first book in the Bachelor Firemen series, THE FIREMAN WHO LOVED ME, but you’ll be doing something to help a tragic situation.

Giveaway ends 11:59pm EST Sep. 24th. Please supply your email in the post. You may use spaces or full text for security. (ex. jsmith at gmail dot com) If you do not wish to supply your email, or have trouble posting, please email maureen@JustContemporaryRomance.com with a subject title of JCR GIVEAWAY to be entered in the current giveaway.
Posted by Maureen A. Miller at 12:30 AM