My Kind Of Heroine

I like unconventional love stories.  How about you?  I like characters that don’t fit the usual mold, and I enjoy throwing them together and letting them create unexpected situations—and maybe an unexpected love match, too. 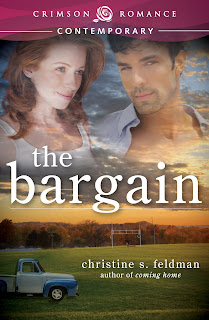 When I wrote The Bargain, I wanted to write a story about an unusual heroine, someone who was awkward and quirky but could win the heart of her leading man in spite of that—or maybe because of that.  And since the story’s leading man, Michael, was quite a heartthrob both in the past and the present, I decided it would be a lot of fun to match him up with someone who was just about the complete opposite of who he was.  And that’s how I came up with Shannon Mahoney, tomboy and socially awkward wallflower.

At first Shannon’s longtime crush on Michael’s younger brother Drew makes her immune to Michael’s charms, which allows the two of them to spend time around each other without her becoming tongue-tied:

“So, ten years ... That would take it all the way back to high school, wouldn’t it?”
She nodded, still very deliberately working on getting just the right amount of ketchup on her fry so she wouldn’t have to look at him.
“Wait—were you and Drew in the same graduating class?”
“Yeah.”
“Then that would mean ... so you and I were actually in school together?”
“For a year, yes.”
He gave her a very thorough once-over as if trying to place her. “You and I—we
never hooked up in high school, did we?”
Shannon’s mouth fell open. “No, we certainly did not!”
“So is that why you were really so mad at me the other day?”
“What?” she sputtered hotly. “You are unbelievable!”
“Oh, so we did hook up.”
“You—“
A slow grin spread across his face, and she realized he was playing with her.
Taking a deep breath, she bit back a name she had been about to call him. “You get a perverse pleasure out of yanking my chain, don’t you?”
“Kind of, yes.”
“Aren’t you afraid I might back out of the deal?”
“No, I think you realize it’s in Drew’s best interest. Besides,” he added with a
knowing gleam in his eye, “I think you get a perverse pleasure out of putting me back in my place, so we’re developing a great little symbiotic relationship here. Don’t you agree?”
“What? Oh, I’m sorry. I’m still recovering from the shock of hearing such big words come out of your mouth.”
Michael started to laugh, and Shannon felt a kind of rush go through her…

And as they spend more time together, and relax enough to reveal more than either of them would have expected of their inner selves, they start to see each other in a whole new way—and to have feelings neither one of them expected:

From atop a grassy knoll in the park, Michael spotted Shannon standing near the stage.  The crowd was too noisy for him to hear the MC very well, but he caught enough of his announcements to understand that the bachelor auction was about to get underway.  He should have known he would find Shannon near wherever Drew was going to be.
It was her hair that caught his attention first, even in the dwindling twilight.  Finally free of any fetters, it fell over her shoulders like cascading fire, and the effect of it made his pulse quicken unexpectedly.  She stood out from the rest of the crowd like a brilliant jewel in a pile of ordinary rubble, and the wonder of all wonders was how the people standing around her didn’t seem to see it.
He saw a dark-haired woman lean in to say something to Shannon, and then watched as Shannon’s face burned with embarrassment.  His jaw twitched, and he frowned.
Girls can be catty.  Wasn’t that what she had said before?
The brunette turned her back on Shannon, as if she were second-hand news, leaving Shannon to try and recover from the obvious snub.
Oh, hell no, he thought.  Not on his watch.
And Michael began to push his way through the sea of people…

And in the end we have a plain-Jane and a longtime ladies’ man who just might turn out to be a perfect match.

Who is your all-time favorite unlikely couple?

THE BARGAIN
Tomboy Shannon Mahoney has always been a lot more comfortable with things like power tools than she is with high heels or lipstick, and she often wishes she could reinvent herself and finally tell her perfect boss, Drew Kingston, that she has had a crush on him since high school.  But she is just as tongue tied and awkward around him now as she ever was, and long-familiar patterns are hard things from which to break free…

Until one day Drew’s estranged older brother Michael comes to town, bringing with him a surprising opportunity for Shannon.

Ladies’ man Michael is a former bad boy looking for redemption.  He is desperate to atone for past mistakes that he made with his family, but younger brother Drew has cut him out of his life and refuses to even speak to him.  Which means Michael needs help getting to Drew.

And so he approaches Shannon with a proposition:  if she will get Drew to agree to hear him out, Michael will mentor Shannon in how to win his brother’s heart.  Suspicious of Michael’s motives, Shannon initially enters into the bargain just to make sure Michael isn’t actually in town to cause trouble for Drew, but the two unlikely allies are surprised to discover that despite butting heads at first, they are beginning to enjoy each other’s company far more than either of them expected.

And Shannon starts to realize that maybe love isn’t about reinventing yourself after all.  It’s about finding your perfect match.
About The Author:
Christine S. Feldman writes both novels and feature-length screenplays, and, to her great delight, she has placed in screenwriting competitions on both coasts—and has even won a couple of them.  In 2012 one of her screenplays was featured as a staged reading in New York City at the Gotham Screen International Film Festival, and later that same year she signed her first publishing contract for her debut novel, Coming Home, with her second one, The Bargain, out this summer.  When she is not writing, she is teaching kindergarten, puttering around in her garden, ballroom dancing with her husband, or doing research for her next project.  Please visit her at her website http://christinesfeldman.com or on Facebook at https://www.facebook.com/ChristineSFeldman.

Goodreads
Amazon
iTunes
Barnes & Noble
Posted by Maureen A. Miller at 12:30 AM