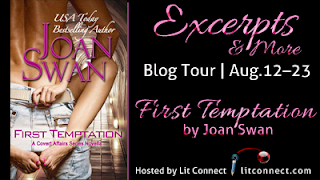 “One-time offer, amigo. I’m leaving town in a couple of days. I can understand how you might not want another man to touch her, and I really prefer to watch, so I’ll make you a couple of offers. Twenty thousand dollars to watch you and Brooks have sex for three hours. Ten thousand to have her to myself for three hours.”

Taft’s jaw clenched. He turned back to Picasso slowly.

“Twenty thousand dollars,” Taft repeated, “to do nothing but watch us have sex?”

“What exactly do you expect for that kind of cash?”

“Anything I want. I say it, you two do it. And I’ll add another ten if she dances for me beforehand.”

A body bumped Taft from the side. He immediately noted the size, the weight, and lifted his arm to drape it around Zoe’s shoulders without having to look at her. She slid her arms around his waist and cuddled close, her body burning hot. She’d thrown the turquoise dress back on, and her sweet and musky scents mixed, rising to Taft’s nose on her heat and sparking an urgent craving low in his gut.

“Glad you made it in,” she said to Picasso, an innocent, invigorated smile lighting her face. “Hope you enjoyed the demo.”

“More than you know, chica.” Picasso slid his hand over the arm Zoe had wound tight around Taft’s abdomen, his fingers stroking the Z high on her arm. “Beautiful tattoos. What does the Z stand for?”

“My middle name, Zelda, which is also my grandmother’s name. We were very close, and I got the tattoo in her memory when she passed.”

“Ah.” He lowered his fingers and drew her hand to his mouth. “Very nice.” Picasso turned her hand over and pressed his lips to Zoe’s wrist. The muscles of her jaw clenched. It was all Taft could do not to put a fist in the fucker’s jaw, but he squeezed Zoe’s upper arm in reassurance, and her shoulders uncoiled.

But Taft was quickly realizing this water she’d swum into was deep, these sharks were great whites, and, in their eyes, Zoe looked like a plump sea lion.

He grinned. “Only for the very special.”

He let her hand go, and she dug her fingers into Taft’s belt as if afraid Picasso would try to take her hand again.

The way she clung to him, the way her nails bit into his side, struck the match on an old, ugly burn in his gut. A lick of panic followed. Then Zoe pressed her head to his shoulder, and as quickly as it had come, the burn, the fear, the panic…vanished. The clench low in his abdomen released. Everything, just…gone.

Taft waited, sure it would be back. This kind of clinginess always made him claustrophobic. Reminded him of how his mother had depended on him from the age of five for everything, from getting to the toilet to getting her social security check. He’d subsequently hated the way any women seemed to latch on if he dated or slept with them more than three or four times.
But as Zoe continued to chat with Picasso, he relaxed in her presence. The long she held on to him, the long he wanted her to hold on. In fact, in the last twelve hours, he’d found himself wishing Zoe would lean on him more. Want him more. Need him more.

“I’ve made your boyfriend an offer I hope you’ll seriously consider.” Picasso pulled a business-card-size piece of paper from his pocket and slipped the corner into the edge of her bra, peeking out from beneath the turquoise sheath. “You can reach me at this number for the next twenty-four hours.”

Counterterrorist agent Taft Walker is up for the challenge of posing as an adult store owner with a new female undercover partner who is also a sex-toy virgin. At least until he sees the real woman beneath her tough façade.

Border Patrol Agent Zoe Brooks is ready to get off the front lines. She’s willing to tolerate a swaggering partner like Taft for a new opportunity. But she’s not prepared for the way he understands her deepest, sexiest desires.

Pre-Order Your Copy at Amazon.com for Only $0.99
Now Through Release Week!
Meet Author Joan Swan:
USA Today Bestselling Author Joan Swan writes sexy romantic suspense for Kensington (Phoenix Rising Series) and independently (Covert Affairs Series).  She also works as a sonographer at a top medical facility in San Francisco and lives in magnificent wine country on the central coast of California with her husband and two daughters. 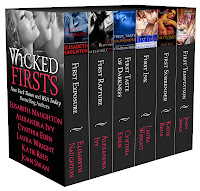 About the WICKED FIRSTS Box Set:

The tour wide giveaway consists of 3 digital copies per the number of tour stops, and three designer purses filled with goodies! Please see the Rafflecopter widget for entry options and full Terms & Conditions.