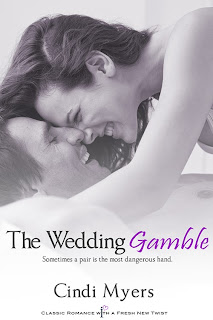 The last place Laura Nichols wants to be on her birthday is her little sister’s bachelorette party in Vegas. But when she stumbles into a Vegas wedding chapel and ends up married to a handsome stranger, the shy schoolteacher from the Midwest finds herself running from mob thugs, discovering her inner bad girl, and falling for the most dangerous man she’s ever met.

Undercover FBI agent David Abruzzo will do anything to keep from blowing the case of a lifetime, including marrying a total stranger on the Vegas Strip. A loner who’s devoted his life to bringing down mob boss Frank Zacolli, David doesn’t have room in his life for any weakness or attachments. But his surprise bride might be the one woman who can turn his life around and make him willingly surrender to a love he never thought possible. 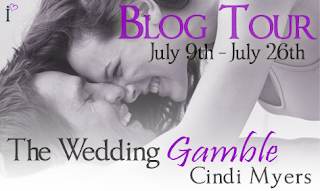 He took her hand. The good-bye seemed terribly formal for a woman who was, after all, his wife. He’d probably never see her again, but he already knew he’d never forget her. The life he lived didn’t leave room for sentiment or self-indulgence, but maybe this once…
“Would you mind if I kissed you?” he asked.
She moved closer to him and put her hand on his shoulder. “You probably kissed me in the chapel, but I don’t remember.”
He scarcely remembered that hasty peck on the lips himself; all of his senses had been focused on the two thugs at the back of the room  waiting for the opportunity to kill him.
“I think you owe me a kiss I’ll remember,” she said.
He didn’t need a second invitation. He covered her mouth with his own, tasting peppermint toothpaste and a vanilla-tinged lip balm. She rested one hand on his chest, palm over his heart, and eased the other up the back of his neck, her fingers twining in his hair, a surprisingly intimate gesture. Some of the tension eased from his shoulders and spine as he gave himself up to that kiss, even as she stepped away.
“Good-bye, David,” she said softly, and moved to the door.
“Good-bye, Laura.”
The door closed with a soft click and he sank onto the bed once more, his elbows resting on his knees, head in his hands. What the hell had just happened?
His mother used to talk about fate. She believed everything, even bad things, happened for a reason. But his mother hadn’t done anything to deserve even half the bad things that had happened to her.
And what had David done to deserve a woman like Laura in his life? He’d made a career of hanging out with scum, and even though he was on the right side of the law, he walked a narrow line and had done his share of unsavory things in the name of justice. What had such a sweet girl ever done to deserve an encounter with a tarnished guy like him?

Purchase The Wedding Gamble at
Amazon
Barnes and Noble