I really don’t think I could write without music. Not only does it inspire more scenes than I can possibly count, but I really don’t do well with silence and writing in it is a no go. Music relaxes me and brings me to a state of mind where I can start to process me thoughts. Even when I was in school I had to have music playing when I was doing homework.

One of two things can happen when I find that perfect song for a scene. A.) I hear the song and the scene comes to me, or B.) I already know the scene and I find the perfect song to correspond. Both are equally exciting. More often than not, once I find one of these songs it’s on repeat for an extended amount of time. 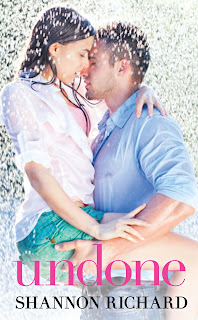 I almost always have music playing. Really, I don’t know how I survived before the iPod. These days my iPhone is my constant companion and it has to do with the fact that an impressive amount of sound comes out of those tiny speakers. I’m also all about music in the car. Pretty much once that key is in the ignition the music is up. I tend to be one of those people that issinging along very loudly (and sometimes doing a little air guitar at red lights). I sincerely hope no one ever films me.It would be beyond embarrassing.

I might be finished writing Undone, but the playlist will never stop growing. There is a new song out called “All Over The Road” by Easton Corbin. The second I heard it I knew it was perfect for this scene:

Paige stretched up, pressing into him, and put her mouth to his ear. “I want you,” she whispered.

Brendan moved so quickly she didn’t even see it coming. The passenger door was opened and he’d bodily lifted her into the seat, reaching across her and buckling her seat belt. He slammed the door and ran around his truck. He climbed in and was backing out in about five seconds.

“You okay there, cowboy?” she asked, trying not to laugh.

“You aren’t allowed to talk,” he said as he navigated out of the parking lot.

“Why?” she asked, folding her arms across her chest.

“Because you have a tendency to say things that make me swerve off the road, and right now I need to have as much focus as possible. Otherwise I might kill us,” he said, staring intently through the windshield.

“I don’t have to say anything,” she said, reaching across the seat and running her fingers up his forearm.

“You also have to stay on your side of the truck,” he said as his hands clenched the steering wheel, his knuckles going white.

“That’s no fun,” she said, as her fingers trailed up his shoulder and to his neck.

“Please, Paige, I’m begging you,” he said and groaned.


Shannon Richard grew up in the Panhandle of Florida as the baby sister of two overly protective but loving brothers. She was raised by a more than somewhat eccentric mother, a self-proclaimed vocabularist who showed her how to get lost in a book, and a father who passed on his love for coffee and really loud music. She graduated from Florida State University with a bachelor’s in English literature and still lives in Tallahassee, where she battles everyday life with writing, reading, and a rant every once in a while. Okay, so the rants might happen on a regular basis. She’s still waiting for her Southern, scruffy Mr. Darcy, and in the meantime writes love stories to indulge her overactive imagination. Oh, and she’s a pretty big fan of the whimsy.
Posted by Maureen A. Miller at 12:30 AM