Congratulations to "Dena", the winner in Marin's giveaway. Thank you to all who participated!

Maureen, congratulations on the launch of the Just Contemporary Romance site—this is going to be a great place for fans of contemporary romance and I'm excited to help kick off a great month of guest bloggers! 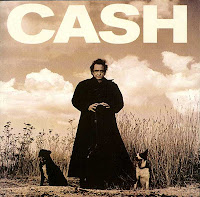 Yep, those words are responsible for a spin-off series called The Cash Brothers that I'm writing for Harlequin American Romance.  The first book in the series, The Cowboy Next Door hits store shelves today! So why develop a series around the famous country western legend, Johnny Cash?  Here's my story and I'm sticking to it…

I was in the middle of writing my Rodeo Rebels series and was about to begin writing the fifth book, A Cowboy's Duty (Aug 2012) when one evening I was searching youtube videos (I do this when I procrastinate) and came across Johnny Cash's… I Walk the Line.

After watching the video I decided that the heroine in A Cowboy's Duty needed six crazy, funny, sexy brothers… (I'm always thinking ahead to the next series I want to write for the line.)  I picked Cash to be the surname of the six brothers and their sister. (Cash was their mother's maiden name) The siblings' eccentric mother, Aimee loved listening to country music legends when she was a teenager and later in life she decided to name each of her sons after her favorite singers. In addition to saddling the boys with monikers that caused a lot of playground fights, Aimee's lifelong search for the perfect man left each of the boys with a different father.  The brothers include…Johnny Cash, Conway Twitty Cash, Willie Nelson Cash, Buck Owens Cash, Merle Haggard Cash and Porter Wagoner Cash.

The first book in my Cash Brother series features, Johnny, the eldest brother.  For those of you who've read my Rodeo Rebels series, you've already met the heroine—Shannon Douglas, the infamous lady bull rider and best friend to the Cash Brothers' sister, Dixie.  In The Cowboy Next Door, Johnny has met his match in this friends-to-lovers tale. 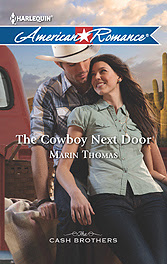 July 2013 Hard-working cowboy Johnny Cash has always been a protector to his little sister's best friend, sweet but tough cowgirl Shannon Douglas. It's pretty crazy for girls to ride bulls-yet it's her life to live. Then he realizes he's got some purely male instincts toward her, too. But absolutely no way can he fall for his boss's daughter-if he loses his job, there'll be hell to pay at home....

Shannon was raised to be strong and independent. She wants a national title so bad she can taste it-and she needs Johnny's help. His protectiveness drives her crazy...the same way his kisses do. But she's not about to hang up her bull rope because of him! Her heart says he's the one-but her own stubborn streak might push away the only man who might actually understand her. 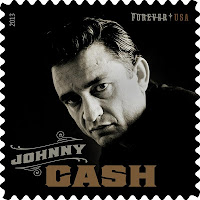 Did you know…..
1) Cash was allegedly the first person ever to be sued by the U.S. for igniting a forest fire. Cash would often take his camper, Jesse James, out to the desert for methamphetamine binges. One time, the camper had an oil leak that caused the Los Padres National Wildlife Refuge to catch fire. The blaze killed almost every endangered condor in the refuge, to which Cash replied, “I don’t give a damn about your yellow buzzards.”

2) Cash and his band mates were constantly stirring up trouble in the hotels they frequented while touring. In the late 1950s, Cash and his band bought 500 baby chickens and let 100 loose on each floor of the hotel they were staying at. Another time, Cash and Co. flushed cherry bombs down a toilet, destroying the plumbing system. Cash also stabbed a reproduction of the Mona Lisa that was hanging in a hotel because it didn’t quite reach his standards.

3) Cash never did a performance where he wasn’t wearing black. Cash started wearing all-black suits as a good luck charm, because he wore a black T-shirt and jeans to his first live gig. He once told Larry King, “[I've] never done a concert in anything but black. You walk into my clothes closet. It’s dark in there.”

4) Just a few weeks before the Air Force shipped him off to Germany, Johnny Cash met Catholic schoolgirl Vivian Liberto at a San Antonio roller-skating rink. They fell pretty hard for each other, a situation made even more intense by their separation over the next three years. In that time, Johnny Cash proposed marriage by phone and the two exchanged an astonishing 10,000 pages of love letters. Many of these pages were published for the first time in 2006, when Liberto wrote her take on the nasty love triangle between her, Johnny Cash and June Carter (as portrayed in the 2005 film Walk The Line which became Johnny's first No. 1 hit in 1956.)  Incidentally, Liberto claims that Cash didn’t pursue June Carter at all as the film portrays, but that it was the other way around -- Carter relentlessly pursued Cash.

GIVEAWAY:
To celebrate the release of The Cowboy NextDoor, I'm giving away an autographed copy of
the book plus a set of six Johnny Cash hat buttons and ten Johnny Cash Forever Stamps from the U.S. Postal Service.  If you'd like your name entered into the drawing for the prizes then go snag a piece of Johnny Cash trivia off the internet and post it in the comment section of this blog!

You'll find lots of great images for The Cash Brothers on Pinterest.  Check out my boards for The Cowboy Next Door and my Top Ten Johnny Cash Playlist.

Visit me on the web… FB, Twitter, Happy Ever After…The Cowboy Way and Goodreads.  And don’t forget to sign up for my Monthly Newsletter to learn more about my upcoming books, giveaways and monthly contests!

Giveaway ends 11:59pm EST July 2nd. Please supply your email in the post. You may use spaces or full text for security. (ex. jsmith at gmail dot com) If you do not wish to supply your email, or have trouble posting, please email maureen@JustContemporaryRomance.com with a subject title of JCR GIVEAWAY to be entered in the current giveaway.
Posted by Maureen A. Miller at 12:30 AM