Congratulations to "Grace G.", the winner in Margaret's giveaway. Thank you to all who participated!

I’m a planner at heart. Not only do I like to make a plan, I also like to announce my plans so I can’t back out of doing whatever it was I said I’d do. But we all know life doesn’t always unfold as planned. When I was younger, I thought I had my life all laid out. School, work, etc. It all seemed so easy. On paper.

Here are some examples of my plans and how they worked out, uh, not on paper:
The plan: Marry somewhere around twenty-five, first kid by twenty-eight, done having kids by my early thirties.

The reality: At the age of thirty-two, I married a man with two children from his previous marriage and raised them as my own.

The plan: To become super-business-woman like Tess McGill in Working Girl and live the big city dream with Harrison Ford.

The reality: I stumbled into a career I didn’t even know existed when I was in my twenties and married a small-town guy from the south who bears a striking resemblance to Sherriff Woody from Toy Story. 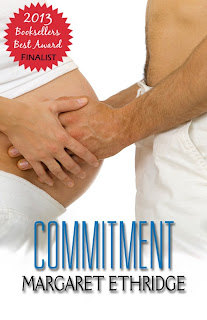 Don’t get me wrong. I’m not complaining. At. All. Although my life has taken a different path than the one I envisioned when I was a young adult, I have no regrets. So far, it’s been pretty darn awesome.

I can’t help thinking I was lucky to have the nerve to jump out of line. By letting go of ‘The Plan’, I lived my life instead of programming it. How’s that for a wild concept?

Commitment is the story of Maggie McCann, a woman who discovers unanticipated happiness in a change of plan. Maggie and I are a lot alike in some ways and polar opposites in others, but we have one important thing in common: we both believe in happily ever after. Even if we’re not quite sure about how we go there.

Life can take some twists and turns. Tell me, what plans have you changed when the prospect for something different came along?  I’ll be giving a digital copy of COMMITMENT to one lucky commenter, so be sure to say hello!

Blurb:
Tom Sullivan wants a woman who is willing to accept him as he is. The successful divorce attorney has seen enough of the flip-side of love to know better than to promise forever. Women have tried to pin him down, but none have managed to make it stick.

Maggie is only interested in one thing. Her fortieth birthday is looming and the tick-tock-tick-tock in her head means her biological clock is about to strike midnight on her dreams of finding Prince Charming. Armed with a new plan for her happily ever, she foregoes the Fairy Godmother routine and makes an appointment with a fertility clinic for a rendezvous with a sperm donor.

The last thing Maggie needs is to get mixed up with a player like Tom Sullivan.

A chance encounter and the opportunity to scratch a decade-long itch prove irresistible, and what starts as a one night stand turns into a game of cat and mouse when Tom learns of Maggie’s plan to start a family on her own.

To Maggie, messing with a guy like Tom Sullivan is the single-girl equivalent of playing with fire, but she convinces herself to take what she can get for as long as she can and expect nothing more. But Tom falls hard and fast for Maggie, and now that they’re planning to have a baby together he starts banking on his own happily ever after.
If only he can get her to commit...

Excerpt:
“Hello, Tom.”
She matched his polite smile, going for a cool tone, but Sheila’s sharp glance told her she fell short. Not a shocker. Any woman with a pulse would feel a spike in temperature near Tom Sullivan, and Maggie definitely had a pulse. The stupid thing was doing a cha-cha-cha in her throat. She never could pull off the cool bit, but there was something about this guy that made her feel compelled to try.
“You look well,” Maggie said, craning her neck to peer past his shoulder. She wanted to kick herself. Such an obvious ploy. Such a ridiculous idea. As if there could be anything better to look at than the man standing right in front of her.
“I see you already know each other,” Sheila murmured, glancing from Tom to Maggie and back again.
His head swiveled. The startled widening of those beautiful eyes made Maggie’s heart skip two, maybe three, full beats. He’d clearly forgotten they had company.
“Yes, we’ve known each other for years,” Maggie purred. Something hot flashed in his eyes as he turned back to her. Then it was gone. His usual mask of cool indifference slid back into place.
“My brother is married to one of Maggie’s friends,” he explained, his lips twitching into a smirk. “Or so they claim.”

Sheila shot him a puzzled glance, and a slow smile curved Maggie’s lips. The devil made her do it. Resistance was futile. A full team of horses—wild, tame, or rabid—couldn’t have kept her from resting her hand on his broad shoulder and stretching up to brush an unprecedented kiss to his freshly shaven cheek. She held his gaze, forcing her smile to widen as she wiped away an imaginary smudge of lipstick with the pad of her thumb.
“Yes, was brave enough to snare one of the elusive Sullivan boys.” She turned to Sheila and winked broadly. “Sadly, I hear they don’t do well in captivity. Like giant pandas. Cute, but you wouldn’t want to keep one in your backyard.”

Giveaway for the digital book ends 11:59pm EST July 12th. Please supply your email in the post. You may use spaces or full text for security. (ex. jsmith at gmail dot com) If you do not wish to supply your email, or have trouble posting, please email maureen@JustContemporaryRomance.com with a subject title of JCR GIVEAWAY to be entered in the current giveaway.
Posted by Maureen A. Miller at 12:30 AM