Congratulations to "Jonetta", the winner of Shannyn's giveaway. Thank you to all who participated!

Of course, answers were all over the place. Some people straight out said that they skip over the sex scenes, others said the more the better. I found them all fascinating.

Most people will agree that sex scenes are meant to further the story. Things must change for the characters (usually things get worse on some level). I’ve read lots of books and in truth, I’ve come across plenty of sex scenes that, while hot and steamy, I didn’t think furthered the story.

For me, the sex in a book is directly related to the characters. It’s all about what they need and what works for them. As I write I try to figure out how having sex will change these characters. Every time they engage in a sexual act won’t necessarily change them, any more than we all change every time we have sex. It’s about picking the times that will have an impact and showing that.

When I wrote my debut, MORE THAN THIS, I wrote a couple of explicit sex scenes. It was important for those scenes to happen because sex is a big deal for Quinn (my heroine). She’s not totally comfortable with her body and doesn’t see herself as sexy. It’s important for her to see how much Ryan wants her. 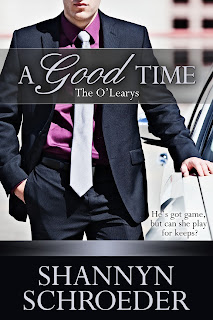 In my second book, A GOOD TIME, the heroine, Indy is comfortable with sex. She’s fine with having casual sex, and she enjoys being a sexual creature. So in the first draft of the book, the sex scenes were closed door. I had a couple of critique partners say that I couldn’t go completely dark. There needed to be something, a hint of how the couple is together. I used this advice during revisions, but the sex scenes are still mostly hinted at. I’m not very explicit, but I didn’t feel that it made sense for these characters.

I just turned in the revisions for book 3 in my O’Leary series, which has explicit sex scenes, and I’m drafting book 4, where my characters just shared their first kiss on page 90. For me it really is based on the characters.

I’ve heard stories of editors telling writers to include more sex or to take some out because they were edging too close to being erotica as opposed to romance. I’m not sure where the line lies. Is there a rule somewhere that dictates how many sex scenes and how explicit they are to determine romance versus erotica?

When you choose a book, what expectations do you have about how much sex should be in it?

Giveaway:
In honor of my new release, A GOOD TIME (O’Learys #2), I’m going to give one commenter a digital copy of the first book in the series, MORE THAN THIS.

Blurb for A GOOD TIME:

Indy Adams values her freedom above all else. She works hard to support herself, moonlighting as a waitress while she fights for her first big sale in the Chicago real estate market. The last thing she needs is to be tied down, so she doesn’t think twice about declining her philandering boyfriend’s marriage proposal. Besides, she just landed a new client, a wealthy lothario—exactly the kind of guy who would understand her no-strings approach…

Handsome, rich, and charitable, most women jump at the chance to even talk to video game developer Griffin Walker, let alone date him. So he can’t understand why Indy wants nothing more than a few steamy nights together. Despite his romantic track record, Griffin longs for real love—complete with a home and family—and he wants it with Indy. But a blessing in disguise may lead them both to a life they never expected, and give Griffin a chance to show Indy that it’s okay to want more than a good time…

And here’s an excerpt -- Griffin and Indy just suffered through an uncomfortable family dinner with Indy’s dad, and they’ve left her sister’s house together.

“How are you getting home?” Griffin asked.
“Same way I got here—public transportation.”
“You’re taking the bus?” Somehow, he couldn’t picture her standing at a bus stop and clambering up the steps, pushing into the crowd.
“Yes, I’m taking the bus. What’s so funny?”
“How many times on your trip did a guy try to pick you up?” That he could imagine, especially with her bar uniform on.
She shrugged. “No more than when I’m at work. The unwashed masses are not as bad as you picture them.”
“Come on, I’ll give you a ride.”
“Not necessary. I don’t mind taking the bus and my apartment is out of your way.”
“Come on. By the time the bus shows, I’ll have you halfway home.”
They walked to his car in silence.
“What, no Jag tonight?” she asked, approaching the SUV.
“Sorry, I came from the office.”
Indy opened the rear passenger door and carefully placed the cake on the floor. She closed the door and leaned against it. “Thank you for tonight. You were an excellent distraction.”
She smiled up at him, golden eyes reflecting the streetlights. On impulse, he lowered his lips to hers. Her heady scent grabbed him and he pressed her against the car.
She tasted even better than he imagined. He expected light and breezy, but found her spicy and secretive. He braced his hands on the car behind her, trapping her with his body and preventing himself from grabbing her. His fingers wanted to tangle in her long hair.
He pulled back before he could want more.

Giveaway ends 11:59pm EST July 6th. Please supply your email in the post. You may use spaces or full text for security. (ex. jsmith at gmail dot com) If you do not wish to supply your email, or have trouble posting, please email maureen@JustContemporaryRomance.com with a subject title of JCR GIVEAWAY to be entered in the current giveaway.