A Different Kind of Suspense


When I think of suspense, I often think of a story where the hero/heroine are running from the bad guy, where they are faced with life or death situations that require them to make split second decisions that could forever alter their lives. They are stories that are jacked up on action, adrenaline, and lots of sexual tension. To me, romantic suspense is Lora Leigh's Elite Ops series or Julie Ann Walker's, Black Knights, Inc., books. 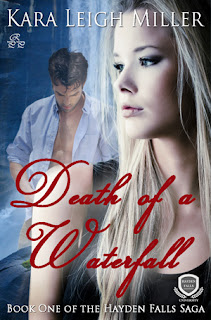 Until recently, that is.

My newest novel, Death of a Waterfall, has been classified as New Adult Romantic Suspense. This got me thinking…what is it about my book that makes it suspense? It doesn't even come close to fitting the description I just gave. Then I realized, there are different types of romantic suspense. Mine fits more into the psychological/emotional suspense category. It's very clear from the blurb what happens in this story. I don't try to hide the fact that Teghan's father forces her into having an abortion. It's his reasons behind why he did it and Teghan's reaction to figuring out what happened that's suspenseful.

Think about it for a minute: how would you react if you found out that the one person you trusted more than anyone else in the world had betrayed you like that? It's terrifying. It completely alters Teghan's perception of him and the world. As if being a college freshman isn't hard enough, she now has to deal with this, too. Her life is falling apart.

So, what types of suspense do you like to see in your romance?

Today, Kara resides in New Haven, New York with her husband, five kids, three cats, and two puppies. When she's not reading or writing, she's thinking about reading and writing. And when she's not doing that, she's spending time with her family and friends.

BOOK BLURB: Teghan Jacobs didn't think anything could be worse than learning she's pregnant by a man she's been dating less than six months. Boy, was she wrong. Her mother, whose drowning in the river of denial, refuses to take a side on the issue. And her overbearing, manipulative father threatens to disown her and cut her off from her trust fund if she doesn't have an abortion.

Donnie Marks couldn't be happier. The woman he loves, the woman he fought so hard to be with, is going to have his baby. Life has never been better. But when she shows up in his dorm room, sobbing and heartbroken, he learns the horrible truth of what happened. He vows to get revenge on the man who's responsible: Teghan's father.

EXCERPT:
Donnie watched as she tucked a strand of hair behind her ear. He smiled. "Do I make you nervous?"
"No."
He studied her for a moment before cocking his head to the side and asking, "So, why do you do that thing?"
"What thing?"
"That thing with your hair. You've done it every time I've seen you," he said.
Teghan felt the heat rising inside her as she looked at her feet and back at him. His eyes glimmered with desire that, she guessed, rivaled her own. She swallowed hard and reminded herself he was off limits. She'd just made things right with Alex, and there was no doubt that if she broke Alex's heart again, her brother, her father, and their friends would never forgive her. It was something she wasn't willing to risk.
But oh, how she wanted to feel him. To place her hands on his hard abs and feel his muscles tense beneath her touch. As he approached, she watched his body, seductively outlined by the light. Her breath caught in her throat when he reached out, took her hand, and gently pulled her to him. It was as if they were two halves of a mold that fit together perfectly. She sucked in a breath and held it. Was he going to kiss her? A small part of her wished he wouldn't, while the rest of her screamed for it.
Donnie cupped her face in his hand, caressing her cheek with his thumb. Teghan's eyes fluttered closed at the feel of his lips coming close to hers. It was like the time she'd stuck her finger in a light socket; a jolt of searing hot energy shot through her body, but then eased away, leaving her stunned and aroused. "We shouldn't do this," she whispered, her lips brushing against his as she spoke.