Nothing good can come from reading someone’s diaries, right?

Nothing good can come from reading someone’s diaries, right? 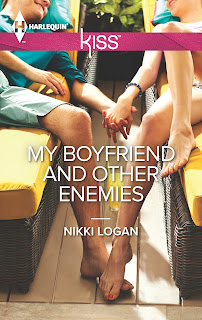 In my July Harlequin KISS release “My Boyfriend and Other Enemies” a pile of old diaries are the first Tash Sinclair knows about the secret love in her recently deceased mother’s past and she goes hunting for the stranger that her mother died still loving. Tash becomes haunted by the idea that she needs to provide closure for the two star-crossed lovers and she forms a friendship with the older man. But this is romance and so naturally he has a gorgeous, workaholic son who is not a bit happy that his father is covertly hanging around a pretty young thing.

But Aiden is a big believer in keeping enemies closer than friends and what is a man to do when he wants to protect his parents’ marriage from the kind of scandal that plagued their past? He swoops in and starts dating Tash himself to distract her from her apparent obsession with his father.

Thus ‘My Boyfriend and other Enemies’ was born. And aptly named.

This book seeded when I heard an intriguing hint of truth from a friend who’d discovered that their parent had died still loving their first love, after a lifetime of enforced separation. (Forgive my vaguery, but to this day it is still a secret and so—to protect the innocent—I can’t say anything more specific about it. Always helpful in a blog J ).

But I grew intrigued by the idea of a pair of star-crossed lovers who never stopped loving each other even though they saw each other only a few times across decades and the inter-familial conflicts the not-so-sekrit secret birthed. My mind naturally went to the next generation and how they would deal with the information—answer: not well, in Aiden’s case—and because I write romance my very next thought was to wonder what would happen if the next generation got emotionally involved.

Talk about sleeping with the enemy…

Well, once you start fictionalising truth it always gets extra-complicated and I had some fun with an old school trope (spoilers!) but also I discovered I had to dig quite deep into the backgrounds of all four parent characters affected by the secrets to help explain their past to their respective children without really messing them up emotionally. I felt obligated to give everyone involved a reasonable backstory so that no one character carried the blame for everything that followed. And I discovered that even the ‘good guys’ had responsibility they needed to shoulder for what came afterwards.

I think it is the most emotionally complex set of backstories I’ve yet written, but I worked hard to stop it weighing the story down. I needed a dramatic past against which to set the flirty, sexy present, and I sure got it!

Tash and Aiden spark when they’re together and he’s just the man to handle Tash’s wild, spirited side. But the impending discovery that they can’t be together any more than their parents could thirty years before hangs over them like a thundercloud, giving all those sparks a whole new stormy dimension.

I hope you enjoy Tash, Aiden and their crazy, dysfunctional family. I know I did.

About the author:
Nikki Logan lives amongst a string of wetlands in Western Australia with her long-suffering partner and a menagerie of furred, feathered and scaly mates.

She studied film and theatre at university, and worked for years in advertising and film distribution before finally settling down in the wildlife industry.

Her romance with nature goes way back, and she considers her life charmed, given that she works with wildlife by day and writes fiction by night–the perfect way to combine her two loves.

Nikki believes that the passion and risk of falling in love are perfectly mirrored in the danger and beauty of wild places. Every romance she writes contains an element of nature, and if readers catch a waft of rich earth or the spray of wild ocean between the pages she knows her job is done.

Nikki debuted for Harlequin Enterprises (writing for the Romance line) in February 2010.